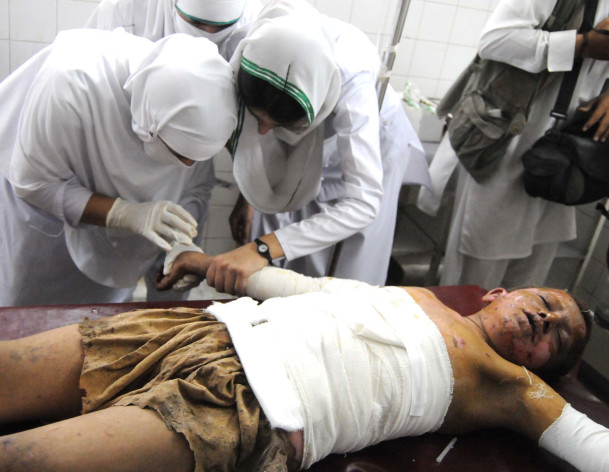 PESHAWAR, Pakistan, Nov 16 2013 (IPS) - Ajab Gul is haunted by bloody scenes. He hears women crying and children screaming. “I can’t sleep,” says the 25-year-old health worker at a well-known Pakistani hospital in the frontier city that tends to terror victims.

He works at Lady Reading Hospital (LRH) in Peshawar which is said to receive 98 percent of all terror attack cases in the restive Khyber Pakhtunkhwa province.

And Gul’s job is particularly difficult. Posted at the hospital’s accident and emergency department  – one of the largest in Pakistan – he has to stitch and bandage wounds.

“I see flashes of bloodied faces and bodies. The cries of women and children who are brought here for treatment ring in my ears every night,” Gul tells IPS.

“They asked me who attacked them and why? I had no answer.”

The ferocity and frequency of bombings and suicide attacks in Khyber Pakhtunkhwa and the adjacent Federally Administered Tribal Areas (FATA) have had a chilling impact on the lives of doctors, paramedics and nurses in the region.

Their wounds may not be visible, but run deep. “Most of us develop psychological problems,” says Gul.

Peshawar, the capital of Khyber Pakhtunkhwa, used to be a peaceful city. But after the Taliban government in Afghanistan was toppled in 2001, many of its militiamen crossed over to Pakistan and took refuge in the border areas along FATA.

For years now, the Tehreek Taliban Pakistan (TTP) has been targeting the armed forces, government installations as well as public places like markets and schools.

Police say at least 210 attacks have been carried out by the Taliban in Peshawar since 2005.

There are around 12 big hospitals in Khyber Pakhtunkhwa, which is home to 22 million people. But most terror attack victims land up at the 1,650-bed LRH.

The state-owned LRH has treated more than 6,000 victims of violence since 2005, says Javaid.

“It is our mission to reduce mortality from terror attacks,” Javaid tells IPS.

But close encounters with severed limbs, bloodied faces, tears and screams leave their scars on the most dedicated of health workers.

“I keep seeing the charred bodies of children in my dreams,” says Rifat Bibi, a 28-year-old nurse at the hospital. “Many times I wake up.

“It is heart wrenching to see children suffering or dying for no fault of theirs,” she says. “They remind me of my own children, sisters and mother.”

Some are unable to put up with the trauma of their jobs.

“About a dozen of my A&E colleagues have got themselves transferred to other wards because they couldn’t stand the stress,” she says.

The twin suicide bombings at All Saints Church on Sep. 22, in which around 80 people were killed, are still fresh in Bibi’s mind.

“A woman, with a bloodstained face, who lost two young brothers that day, wept so much over their bodies that the memory still haunts me,” Bibi tells IPS.

Jauhar Ali is the president of KP Paramedics, which works with various hospitals in the city. He says its 560 paramedics provide diagnostic services and treatment to all kinds of patients.

“But our priority is those who suffer multiple injuries in bomb attacks. We need to stop the bleeding, and bandage their wounds,” he says.

“Even when we are not working, the scenes keep flooding back to mind,” says Jauhar Ali, who also conducts X-rays.

Two years ago he encountered three severely wounded children who were in Grade I. “They asked me who attacked them and why? I had no answer.”

Now he worries endlessly for his own children.

“My children are the same age, they too could become terror targets some day.”

Dr Amjad Ali, a psychiatrist at LRH, says healthcare providers are also vulnerable to rough treatment at the hands of victims’ families.

Citing the Sep. 22 church attack, he says, “That day we received 233 victims within one hour. All were provided treatment. But the angry relatives of some victims attacked health workers.”

“They burst into tears when they see people in pain. One in 10 shows symptoms of psychological illness. I have examined dozens of health workers who required anti-depressants and counseling,” Amjad Ali tells IPS.

“When you see bloodied bodies so often, how can you not be affected?”