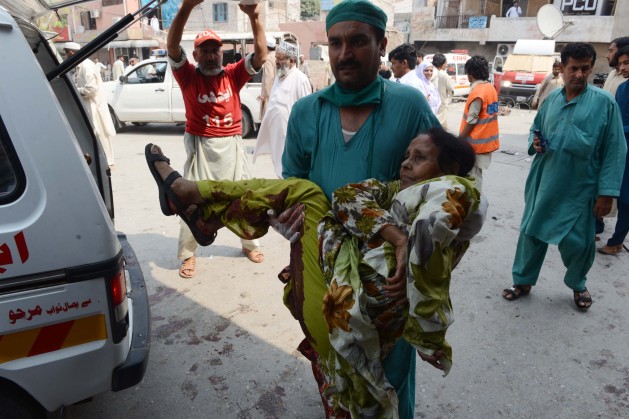 An injured Christian woman is taken to the ambulance after the bomb attack on a church in Peshawar that left 85 dead, and scores injured. Credit: Ashfaq Yusufzai/IPS.

PESHAWAR, Pakistan, Oct 23 2013 (IPS) - Like most Christians in Pakistan, Johar Maseeh did a little cleaning job. He was a sweeper in a factory in Peshawar, capital of Khyber Pakhtunkhwa province in northern Pakistan.

He was among the many killed in a bomb attack on the All Saints Church in Peshawar last month. He was also among the hundreds of thousands of Christians in Pakistan considered filthy by large numbers of the majority Muslims for doing such a cleaning job.

“Nobody is ready to shake hands with Christians,” local tailor Rafiq Maseeh told IPS. “Literally, they are treated as an untouchable community.” He said he had many Muslim customers but the majority were unwilling to talk to him.

“The majority of the Christian population is concentrated in Peshawar because they are afraid to live in rural areas due to reprisals by the local population.”

“Nobody is ready to shake hands with Christians. They are treated as an untouchable community.”

Vast numbers of Christians live in utter poverty in slums where they lack water, sanitation and health facilities. “We live in a two-room mud and brick house which has too little space to accommodate our 10-member family,” Javid Pyara a sweeper at the University of Peshawar, told IPS.

Such as they are, they are often considered agents of the West.

“Whenever incidents of blasphemy take place anywhere in the world, the Christians in Pakistan bear the brunt,” advocate Shamshad Khan told IPS. Last year, a church was burnt in nearby Mardan when riots erupted following the production of a blasphemous film by a U.S. filmmaker.

“People see Christians as non-Muslim and don’t like them,” he said.

The constitution of Pakistan bars Christians from the positions of president or prime minister. “They have been allotted one percent seats in the provincial and national assemblies but that doesn’t mean that they are part of the country’s politics,” Shamshad Khan said.

“Many of the people don’t want a handshake with the Christians,” he said. “None in Pakistan would like to share food with them.”

The only hope for many is to see their young lead a better life. “There is now a trend among young Christians to get education and get well-paid jobs. They are unwilling to take up cleaning jobs,” 60-year-old Bhuta Maseeh, a sweeper in a government office, told IPS.

“I have graduated from a local college and now I am a cashier in a bank,” his son Akram Maseeh told IPS. “About a dozen of my friends have also found good and lucrative jobs because they had got university education.”

Many young Christians do see a better future than their parents have known. “We have Muslim friends. We sit together, eat together and discuss politics and other matters together. We respect one another,” Mukhtiar Maseeh, a sweeper’s son and a student of Islamia College in Peshawar, told IPS.

Now that move towards better living is shaken. The devastating suicide attack at the All Saints Church in militancy-stricken Peshawar has led to renewed fear among the poor Christian community. The bombing left 85 dead and 140 injured.

About 100,000 Christians living in Peshawar now struggle with terrorist threats after the fight to find acceptance and a decent living.

“We have no protection at all. The terrorists have diverted their guns towards us. We need tight security measures,” Jamil Maseeh, 29, who was injured in the Sep. 22 attack, told IPS.

Muhammad Karim, a Peshawar-based religious scholar, said the attack aimed to create a rift between Muslims and Christians. “We should be thankful to the Christians because they are cleaning our hospitals, offices and markets. We must not harm them as they serve our people. Our religion Islam also advocates living in peace with non-Muslims.”

“It is extremely shocking and shameful that we are unable to protect minorities,” Maulana Tahir Ashrafi, chairman of the Ulema Council, told IPS. “According to the holy prophet Muhammad, peace be upon him, it is the duty of the state to protect the places of worship of non-Muslims.”

But friction with orthodox Muslims is a constant danger. “Relations between churches and mosques are not as cordial as they should be,” Maulana Zafar Gul, a Muslim scholar, told IPS. He said the majority of Muslim clerics oppose churches but keep silent due to government and international pressure.

“We already lead miserable lives in Pakistan,” chairman of the Pakistan Minority Movement Saleem Grabble told IPS. “Our people have been doing cleaning jobs on meagre wages. Now terror attacks are trying to eliminate us physically.”

The latest attack against Christians was aimed at drawing international attention at a time when the government is determined to hold a dialogue with the Taliban, said Sawar Shah, a Lahore-based political science teacher. “Terrorists have been targeting mosques, the Shia community, funeral ceremonies, schools, marketplaces and government buildings to express their anger over Pakistan’s role in war against terrorism.”