A Day Off to Riot in Peace 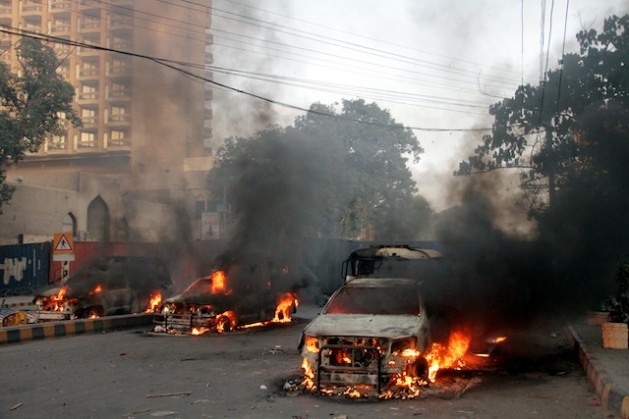 A Karachi street during the rioting on Friday. Credit: Adil Siddiqi/IPS.

KARACHI, Sep 22 2012 (IPS) - The holiday declared by the Pakistani government on Friday seems to have given free rein for the rioting and killing over the American film that is disrespectful of Prophet Muhammad.

“If people had gone for work, they wouldn’t have had time to join these protests,” says Khan, 37, mother of two who was witness to mayhem on a road she takes daily. “I fail to understand why teenage boys were taken to these protests. What will they learn from seeing so much violence?”

“The holiday was unwise; it speaks of lack of creativity on the part of rulers,” says Naeem Sadiq, businessman and peace activist. “Clearly the protests were hijacked by the religious right. Protests were held in some 20 other countries, how come nobody even got a single scratch?”

In Pakistan, at least 23 people were killed and over 200 injured. Karachi and Peshawar became rife battlegrounds for protesters fighting the police.

“Property damage, injuries, and deaths have become the norm,” Prof. Pervez Hoodbhoy from the Lahore University of Management Sciences and the Quaid-e-Azam Univerity in Islamabad tells IPS.

“Exciting passions is easy in every case and it doesn’t have to be America or Israel to get the froth up. An illiterate 13-year-old half-wit, a poor peasant Christian woman, or an imbecile who allegedly uttered words against the Prophet have also created mass dementia.”

“The image of Muslims as an emotionally charged community has been re-established by the recent violence,” Hassan Askari Rizvi, a well-known defence analyst based in Lahore tells IPS.

With mobile networks switched off by the government in 15 major cities, the trail of destruction and death pointed to poorly trained and ill-equipped police and paramilitary forces.

Even before Prime Minister Raja Pervez Ashraf’s address early Friday morning ended in which he condemned the film Innocence of Muslims, supporters of religious parties had started to attack and burn shops and cinema houses in Peshawar in Khyber-Pakhtunkhwa province.

“I think the state and the government in Pakistan are unable to regulate and give direction to society any longer,” says Badar Alam, editor of Herald, an English-language monthly. “Politics in Pakistan, and by extension the state and the government, are being led by the street as far as religious issues are concerned rather than the other way round.”

But he says it is not clear whether the holiday was a good idea or a bad one. “If I compare it with what happened in Lahore on Feb. 14, 2006, when a mob (protesting over the Danish cartoons) went on a rampage, I don’t see a lot of difference in terms of violence even though it was not a holiday.”

State-sponsored and government-supported Islamisation of society started in the 1980s during Zia-ul Haq’s nine years of dictatorship, he says, and Pakistani society is now so radicalised that the government cannot reverse the process even if it wants to. “So they take the easy way out, just flowing with the flow.”

Anjum Nisar, former president of the Karachi Chamber of Commerce and Industry says that apart from the human loss, the disputed holiday cost Pakistan 20 billion Pakistani rupees (210 million dollars) in revenue and trade losses. In Karachi alone, he says, losses in trade, industrial production and revenue were estimated around 13 to14 billion Pakistani rupees (137 to 147 million dollars). That is not counting the damage to property.

Mufti Muhammad Naeem who heads Jamia Binoria, a religious institution in Karachi, blames the government and the religious parties for Friday’s carnage. “Where were people like Nawaz Sharif, Imran Khan, Maulana Fazl ur Rehman and Dr Munawwar Hasan?” he said, referring to leaders of mainstream political and religious parties.

“These protests should have been led by our political and religious leaders, but all were conspicuous by their absence. Instead, uneducated youth with their emotions gone topsy-turvy were given banners and made to come on the street.”

“The leaders were absent because they are scared of invoking the ire of the United States,” says Yahya Mujahid, spokesperson for Jamaat ud Dawa, an organisation that grew out of the banned Lashkar-e-Taiba. “If they had been present, this degree of violence could have been avoided.”

Dr Muhammad Taqi, a doctor practising in the U.S, said the “amateurish, and hateful expression” in the form of the 14-minute clip fro the film that can be seen on YouTube says he is not surprised by the outrage. “Such episodes are always manufactured and manipulated,” he told IPS over email. “This is not the first or the last time someone has attempted something like this.”

But, he said, “it would be foolish of me or anyone to let someone push our buttons and send us into frenzy with one video.”

JuD, says Mujahid, will continue to protest “till the film-maker is not punished by the United States in keeping with the Islamic Shariah.”

He says not one worker from their organisation was arrested because it did not resort to violence. “But it is not our responsibility to control the crowds when they got violent, it was the state’s.”

JuD says the international community must come up with global laws that give protection to all religions.