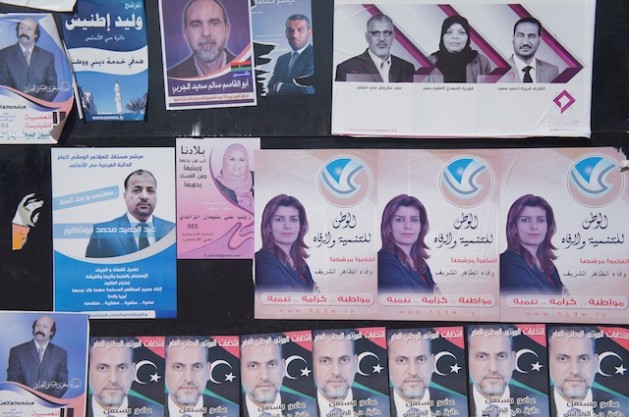 Campaign posters ahead of the elections in Libya. Credit: Rebecca Murray/IPS.

TRIPOLI, Jul 5 2012 (IPS) - On the eve of Libya’s historic elections for a General National Congress on Saturday, Jul. 7, the seaside capital’s bustling streets are lined with hundreds of campaign posters advertising electoral candidates – including those of women and youth – jockeying for a stake in their country’s future.

On a rooftop café near Martyr’s Square, young women registered for the upcoming vote share coffee, cake and their views.

Jasmine Ahtash, 21, is a medical student with an infectious laugh. “I’m enjoying studies now but it’s hard for girls to do medicine,” she says. “In Libya you get married and have kids. It’s hard for a mother to work and take care of their family.”

Her friend Yusra El Jerbi, 26, never finished university but holds a position with a private pharmaceutical company. She admits she is lucky in a job-strapped Libya.

“I’m not looking for tall buildings and another Dubai,” El Jerbi sighs. “I want a clean country, with jobs, a good education and health. It’s a country of nothing and we want to improve it, step by step.”

Libya’s new congress will appoint an outside 60-person commission – drawn equally from the country’s west, east and south – to write the constitution. They will also nominate a prime minister to form a new government. Libya’s next elections, based on a political system dictated by the new constitution, are scheduled in a year-and-a-half.

After a delay, the High National Election Commission (HNEC) announced the electoral candidates on Jun. 17, leaving just weeks for the public to get to know the 3,708 candidates competing for the 200 seats.

For a country whose last election was in 1965, the complexity of the election, the sheer number of candidates and new parties, and what they stand for, is mindboggling.

In all, 2,501 candidates are running for 120 seats allotted to independent candidates. The remaining 80 seats will be fought over by 1,207 candidates from 130 political parties.

The high profile parties so far are the Justice and Development Party – affiliated with the Muslim Brotherhood; the Nation Party – whose membership includes Hakim Belhaj, who charges the UK government for his rendition back to Gaddafi’s Libya; the National Front Party, whose members are long time exiled opposition; and the National Forces Alliance – a coalition of parties spearheaded by former NTC Prime Minister Mahmoud Jibril.

Overseas voting lasts from Jul. 3 to Jul. 7 in the UK, the U.S., Canada, Germany, Jordan and Dubai.

“I became an activist during the Egyptian revolution, and started calling for a day of rage in Libya,” declares Zahra Langhiz, a Libyan exiled most of her life in Cairo, and co-founder of a lobbyist group, Libyan Women’s Platform for Peace.

“We want an inclusive democratic system where equality is fostered in society across class, gender and ethnicity,” she says.

An engaging personality who produces a travelling television series called ‘Libya Speaks’, Langhiz ventures as far as Sabha, Derna and Bani Walid, as well as the main cities of Tripoli, Misrata and Benghazi, to discuss diverse views.

While Langhiz lauds Libya’s family laws as one of the best in the Middle East, she is worried a new conservative government could pass restrictions.

“The constitutional drafting committee will be chosen by the national congress, and there is no mention of gender representation there. So even if you have a quota elected into congress, you could end up with just one woman on the committee. This is the real challenge, and we have warned them,” she says.“The problem is we have deposed our dictatorships, and now we could get another dictatorship that is elected, and that is not good.”

The flare up of conflict is very real in many areas of west, east and southern Libya, and, if triggered during the election can exclude female participation and further disenfranchise marginalised communities.

Human Rights Watch underlines the danger. “This is the biggest problem we have with the current set up of the elections,” says researcher Hanan Salah. “There is no Plan B. So if a polling station is closed prematurely for violence or any reason, there is no contingency on what to do afterwards.”

“Jobs and education are still issues. On a larger scale, it is urgent we get security,” Elganbur warns. Since Tripoli cancelled its local council elections – as opposed to Misrata, Benghazi and Zwara – he believes voters in the capital are on a learning curve.

Hanging out in a café in Tripoli’s Italian-era Gold Souk is Abdullah Moktar Shalabi, a 20-year-old athlete with the national basketball team. He dreams of being recruited to a club abroad – sports was frowned upon and at one point banned by the Gaddafi regime – but studies English literature as a back up plan.

“We have a clue about the elections, but we don’t know the people and stuff. We have to do our homework. We are new to elections, this is our first.”