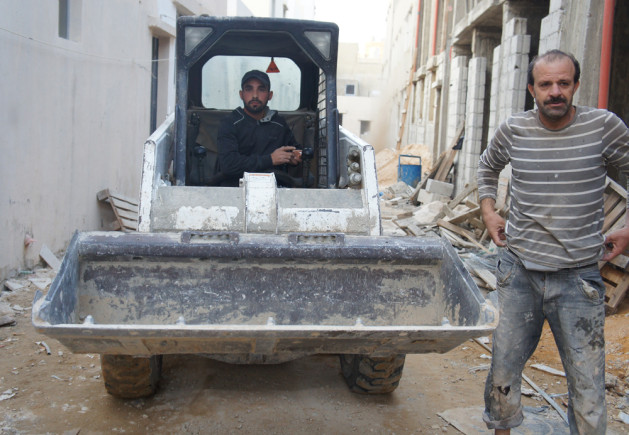 Reconstruction at Nahr El Bared has been slow, and has left refugees deprived and unhappy. Credit: Rebecca Murray/IPS.

In the summer of 2007, the Palestinian refugees of Nahr el Bared, just 16 kilometers north of Tripoli, paid a devastating price in the battle between the Lebanese army and a small militant group living in their midst, Fatah al Islam.

The three-month fight emerged from a power vacuum left by competitive Palestinian factions unable to effectively police the community themselves. It destroyed the camp and its regional market for local Lebanese farmers and smuggled Syrian goods.

“I think the community is broken. The neighbourhood has changed, and the memories that make us think about the old times have gone.”

Over 30,000 refugee families fled to one of the other 11 official Palestinian camps in Lebanon, leaving their homes, possessions, and jobs behind.

In Vienna the following year, international donors pledged to fund reconstruction by the United Nations Relief and Works Agency (UNRWA) of the camp’s thousands of homes. To date, only a fifth of the community has returned to the now declared military zone, and building funds are about to run out.

A combination of the war in Syria and donor fatigue is to blame, and the area’s impoverished Palestinian community – at risk again of being sucked into the nearby violence – sees itself as a low priority for international help.

Shadi Diab, 40, a barber from Nahr el Bared, lives in the camp’s temporary housing while waiting for his own home to be totally rebuilt. He said he fled the camp with his wife and children on the third day of the fighting. When he returned he found the seaside community isolated by security checkpoints, and his building destroyed.

“We are being punished for something we didn’t do,” he said. “Nahr el Bared is not the same – it’s worse than before. The marketplace economy is ruined, and is now only for us. For people to come in there are a lot of military restrictions – not anyone can enter now.”

Palestinians in Lebanon are legally banned from owning property and from work in about 70 professions. Although the labour law was recently revised, very little has changed on the ground, forcing the impoverished population to compete with the influx of Syrian refugees over manual work for meagre wages.

UNRWA is restricted to rebuilding 5,000 homes in the ‘old’ UNRWA-mandated camp, established in 1949, and not in its larger outlaying areas, nicknamed the ‘new camp’. Having completed the development of four out of eight parcels of land, the agency estimates 2,500 families will move back by spring 2015, which is when funding ends.

UNRWA director Ann Dismorr said the agency received around 345 million dollars in pledges. “We still need about 50 percent of that. If the money was there we could finish the whole camp in a few years, but the problem is that it isn’t.”

Reconstruction has been slow and plagued by challenges. Among the allegations is that it has been heavily bureaucratic, favouring construction contractors aligned with politicians, with political grandstanding over issues like the discovery of an archeological site. And then there is the controversial shape of the newly built camp itself.

The new homes are smaller and the streets wider, to allow the army – historically banned from patrolling inside Lebanon’s Palestinian refugee camps – to drive their armoured vehicles through.

In Vienna, the Lebanese government had promised that the reconstruction of Nahr el Bared would serve as a model for the other camps. But Sahar Attrache, a researcher for the International Crisis Group, does not believe it has turned out that way.

“Unfortunately all parties failed in this, mostly on the Lebanese side. All the promises that have been given to Palestinians have not been realised, and in fact have helped to fuel resentment and undermine credibility.”

Originally bought by the Palestinian Liberation Organisation (PLO) from Lebanese landowners, Mohajareen was built to house Palestinian refugees fleeing the massacre in Tel al Zaatar camp in 1976. However, the land sale was never officially registered with the state.

After 2007, the destroyed neighbourhood was handed over to the Islamic Waqf, or charity, which in turn donated its use for the over 100 Palestinian families who lived on the land.

The NRC, after a drawn-out period of legal wrangling, is slated to hand over nearly 90 finished homes, hooked up to electricity and water, to Mohajareen’s old residents in February. But they recognise the Palestinians’ disappointment.

“It is the same number of families going back in, but with less space which is an area of particular difficulty,” said NRC director Niamh Murnaghan. “One of the conditions of rebuilding was that the pathways between accommodation space are wider, so the inevitable loss is from housing space.

“If you have been displaced for 65 years and you feel that something more is taken away, then inevitably it’s hard to feel positive,” she said.

Fouad el Haj, is a 24-year-old from Mohajareen. As a site supervisor he is proud of his role in rebuilding his community. But he said his biggest challenge is dealing with his old neighbours, upset with the architecture and the wait to move back in.

“I think the community is broken,” el Haj said. “The neighbourhood has changed, and the memories that make us think about the old times have gone.”