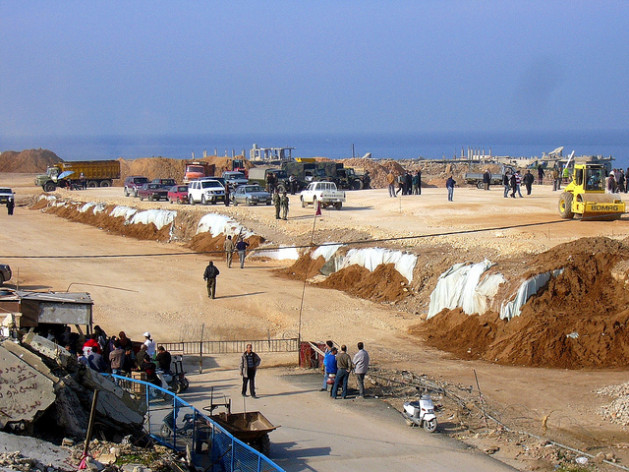 WASHINGTON, Mar 7 2013 (IPS) - A top United Nations official is warning that the plight of Palestinian refugees is being neglected amidst the ongoing crisis in Syria.

Currently in Washington, Filippo Grandi, commissioner-general of the United Nations Relief and Works Agency for Palestinian Refugees in the Near East (UNRWA), is urging U.S. lawmakers to maintain financial support for the roughly five million UNRWA-registered Palestinians in the Middle East, even as broad budget cuts threaten U.S. overseas aid.

“From a strategic interest point of view, the biggest competitor for attention and resources to the question of Palestinian refugees today is the crisis in Syria, which is monopolising political attention, funding and humanitarian efforts,” Grandi said at the Middle East Institute, a Washington think tank.

The problem is the conflict in Syria has become so big, so widespread, so violent and so present to everyone’s lives that keeping the Palestinians out has become increasingly difficult.

“Of course Syria is important, but I encourage people not to forget that the Palestinian refugee element in this crisis is extremely sensitive.”

As profound changes sweep across parts of the Middle East, Palestinian refugees have once again found themselves stuck in a position of stagnation, their interests marginalised. A present-day reminder of the war of 1948, they remain scattered across an unstable region, particularly vulnerable to events in Syria.

There are an estimated 500,000 Palestinian refugees living in Syria – mostly descendants of families who fled their homeland as a result of the Israel-Arab wars of 1948 and 1967 – where they have lived in relatively stable conditions compared to their compatriots in Lebanon, Jordan the West Bank and Gaza – poor but given access to jobs and services by the Syrian regime.

The changes that the “Arab Spring” brought to the region have had little positive effect on Palestinian lives. In the case of Syria, it has only made things worse.

Grandi says his office estimates that almost half of the 500,000 Palestinians in Syria are currently displaced.

“They cannot go to Jordan, as Jordan has issued a very stringent policy of no admission for Palestinian refugees from Syria,” he says. “They claim they are already doing enough for the hundreds of thousands of Syrians coming over the border and for the two million Palestinian refugees they have already hosted in the country over the last six decades.”

He notes this “worrying policy” is preventing desperate people from fleeing violence across borders.

The only way out, then, is to go to Lebanon. An estimated nearly 30,000 Palestinians have done so, joining the almost 200,000 Syrians that have likewise fled to that country.

“These Palestinians are a heavy burden for Lebanon, however,” Grandi says. “There is a very sensitive balance between the communities and religions, which makes the presence of more Palestinians more sensitive than in any other country. Even without this influx, they are already living in appalling conditions and in a very difficult situation.”

Since the beginning of the conflict in Syria, UNRWA has sought to remain neutral, as has the Palestinian leadership. Even Hamas, whose political headquarters had long been hosted in Damascus by the al-Assad government, moved its offices to Qatar more than a year ago.

This was due to the deteriorating security situation and to avoid any repeat of the violent backlash directed at Iraq’s once-protected Palestinian community, for the perceived favouritism allotted them during the reign of Saddam Hussein.

Indeed, Palestinians have a difficult history of being involved in the conflicts of others. This includes in Lebanon, Jordan and the first Persian Gulf War, during which Yassir Arafat sided with Saddam Hussein, resulting in the expulsion of hundreds of thousands of Palestinians from the Gulf States allied with Kuwait.

Today, however, the conflict in Syria is complicating Palestinian lives throughout the region.

“The problem is the conflict in Syria has become so big, so widespread, so violent and so present to everyone’s lives that keeping the Palestinians out has become increasingly difficult,” Grandi says.

“Today, there are groups of Palestinians that are supporting the [Syrian] regime and some groups that are siding with the opposition.”

Perhaps the most difficult situation, he notes, is in a suburb of Damascus called Yarmouk, an unofficial camp densely populated with the largest Palestinian refugee community in Syria. It is a strategic area that is considered vital to controlling Damascus, and the fighting there has been particularly intense despite its neutral designation.

Here in Washington, broad budget cuts kicked in on Friday, forcing 85 billion dollars in spending reductions across all federal agencies. Some worry these cuts, known as “sequestration”, could now threaten vital U.S. aid to UNRWA.

Although it is not known yet the extent to which sequestration could affect foreign aid coffers, Chris McGrath at UNRWA’s Washington office emphasises that a cut of just five to 10 percent would be “devastating”.

“This would literally mean bringing a stop to services on the ground,” McGrath told IPS.

“We have a 67-million-dollar budget deficit this year, and any cut would mean closing schools or health care centres. Our services are always increasing – especially in Gaza, where the economy is so poor, and in Syria. Funding is always our biggest challenge and now is no exception.”

Amidst the broader discussion over how or whether to cut U.S. foreign aid spending, many groups are ramping up efforts to highlight the significant returns the United States receives for its foreign spending.

“The U.S. has invested a lot of time, energy and resources in terms of developing a ‘smart power’ way to engage the world, and an important part of that is being able to work with countries that need support – in terms of moving toward democracy, bringing people out of poverty, and moving toward conditions where peace can prevail,” Don Kraus, president of Citizens for Global Solutions, a grassroots organisation headquartered in Washington that focuses on encouraging cooperative and multilateral foreign policy, told IPS.

“If you take away this funding, it will only come back to haunt us, in terms of higher military expense, greater conflict and mass migration. The value we get from spending less than one percent of our budget on foreign aid is incredibly important.”