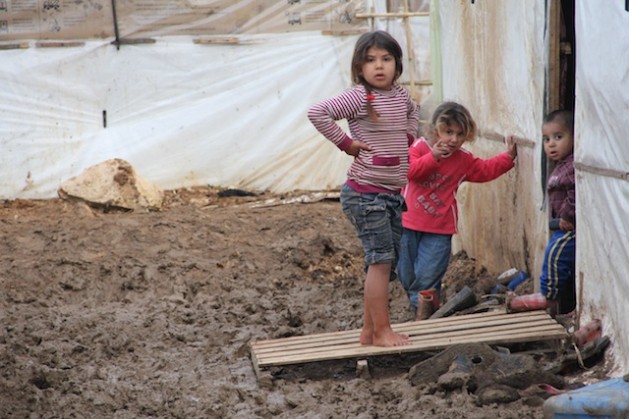 TRIPOLI, Lebanon, Jan 15 2013 (IPS) - Zuhur al-Khalaf is eight months pregnant and lives in a one-room shack in northern Lebanon with her husband and five children. The cloth walls and cardboard roof have become sodden and musty after heavy storms this past week, and two of the children are suffering from fevers and chest infections.

The family fled the Syrian city Homs when their home was demolished in the fierce battle for Bab al Amr early last year, which culminated in the Syrian army encircling and heavily bombarding the district.

“We moved from place to place until there was nowhere left to go and then we came to Lebanon around three months ago,” said al-Khalaf. The family’s tent is in the middle of a makeshift camp that has become home for around 200 refugees on the outskirts of the northern city Tripoli.

Severe storms that saw heavy snowfall and flooding across much of the country have compounded the refugees’ already dire situation. “These shelters offered us no protection, everything got wet and it is still so cold,” said al-Khalaf.

Her two ill children lay huddled under blankets next to her. A pile of damp scraps of bread had been laid out to dry on sheets of newspaper by the door. “We live on bread, tea and bananas,” said a neighbouring refugee, “we can’t afford to waste anything.”

The families rent their tents from a local farmer for around 70 dollars a month and try and find ad hoc work as labourers or farmhands. The men can expect to take home around 10 dollars and the women seven dollars for a day’s work, but most of the refugees are unable to find jobs.

“Life may be better than in Syria but in reality it is still very bad for us here. There is no work and we are not getting the support that we need,” said al-Ahmad.

Just under 200,000 refugees have fled to Lebanon since Syria’s upheavals started almost two years ago, according to the latest figures from the United Nations Higher Council for Refugees (UNHCR).

Many of those living at the camp have not registered with the UN agency and therefore do not receive any of the basic support services it offers. “We lost our papers when our house was destroyed so we don’t have anything to prove who we are,” said Zuhur’s husband Mohammad al-Ahmad.

Some of the other refugees choose not to register with the UNHCR out of fear of being monitored by the authorities, as paranoia is still common among refugees over the presence of Syrian intelligence in the country, real or perceived.

“I would rather live anonymous,” said Abu Nidal, a refugee from the Idlib countryside. “Anything could happen in the future and what if I have to travel back to Syria?”

Lebanese officials have appealed to Arab states Sunday for help funding support for the Syrian refugees at an extraordinary session of the Arab League in Cairo, warning of “a dangerous humanitarian situation.” The government has recently announced a plan that requires an annual 180 million dollars budget to help deliver basic health, social and education services to the refugees.

However, Lebanon is already bogged down in a political impasse over the country’s precarious fiscal standing. A dilapidated infrastructure and administration have hampered efforts to deliver the necessary services.

The Syrian conflict is hugely divisive in Lebanon, and this has further disrupted efforts to address the humanitarian needs of the refugee communities. The government’s lack of coherent policy means few services have been extended to arriving Syrians and no formal camps have been established, like those in Jordan or Turkey.

“In other neighbouring countries there are proper camps so organisations know where people are and what services they need but here it is so informal and ad hoc that people don’t know who is in need of what and where they are,” said Ashraf Alhafny, project coordinator for the Warad organisation, which buys and collects resources such as bedding and clothes for refugee communities in northern Lebanon.

In addition to unforgiving weather, dire economic straits and a dearth of material support, many of the refugees also suffer from racism. The two countries have an intimate and oftentimes troubled history and the Syrian conflict and influx of refugees is exacerbating Lebanon’s political instability and economic vulnerability.

Leaving the camp, two young men talked of their daily life, which has been reduced to begging on the streets. “I have been beaten,” said one. “And people shoo us away and say ‘you are Syrian, you are a gypsy, go home’.”