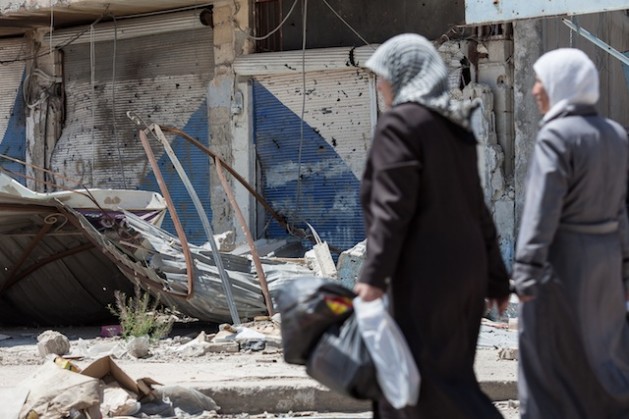 MASHEREE AL-QA'A, Lebanon-Syria Border, Oct 14 2012 (IPS) - A group of six men listen as voices crackle through a walkie-talkie. They are sitting in a farmhouse in the north of Lebanon less than a kilometre from the Syrian border. The sound of gunfire and shelling in the distance sporadically punctuates the atmosphere. One of the group returns to the room after taking a telephone call. “Good news from the battle,” he exclaims with a smile.

The men are all in, or related to members of, the opposition’s Free Syrian Army (FSA), which is fighting fierce battles for control of a number of villages and the surrounding countryside on the other side of the border. “A military leader for Hezbollah has been killed in Zara’aat along with the head of Syrian intelligence from al-Qusayr,” he continues to tell the group. Earlier in the day the men also received news that at least 13 Hezbollah fighters had been captured and detained inside Syria.

Hezbollah is a Lebanese Shia militia-cum-political party that is the predominant force in Lebanon and it has remained a staunch ally of Syria’s President Bashar al-Assad throughout the uprising. The Syrian opposition and its supporters in Lebanon have long suggested that Hezbollah is actively helping Assad quash the rebel forces, but the party has always denied any direct involvement.

However, the ambiguity surrounding the deaths of a number of Hezbollah fighters, including some highly ranked commanders in recent weeks has aroused accusations to the contrary. With the death of two senior military commanders in August and September the party stated that they had been killed performing their “Jihadi duty”, but did not say where.

Hezbollah leader Sayyed Hassan Nasrallah finally made a televised appearance on Thursday evening in which he categorically denied that the commanders had fallen in Syria, while also denying the capture of the 13 Hezbollah fighters.

“The Syrian Army is weak along the border now and Hezbollah is scared that the FSA will take control of all of it,” says Abu Ahmad, a combatant for the FSA on the Lebanese side of the border. He was fighting less than five kilometres from the Lebanese border in Zara’at the day before in a battle that is primarily about securing supply lines.

The FSA needs to maintain routes for the flow of refugees and injured fighters out of Syria while medicine, fuel and weapons move in the opposite direction. The routes from northern Lebanon to the Syrian town of Qusayr, via villages such as Zara’at and Jousi, are particularly important as the rebels in the war-ravaged city of Homs largely rely on them for ammunition and weapons.

Similarly, the army’s ability to hold territory is dependent on its supply lines from the heart of the country. “We have managed to cut their most important routes,” says Abu Ahmad. “They desperately need food and munitions and that is why there is such a tough battle for the villages across the border.”

Refugees and FSA fighters within Lebanon claim that Hezbollah has been using Housh as-Sayed Ali, a district on the border under their control just north of the town Hermel, to provide supplies to the Syrian army and send in fighters to buttress its debilitated forces. They say that the party’s fighters are firing across the border from Lebanon into Syria so as to pincer the FSA between the Syrian Army’s artillery fire from the mountains in the east and to cut their escape routes back into Lebanon.

In his televised speech Sayyed Nasrallah denied Hezbollah had sent fighters into Syria but conceded that members of the party have been fighting there on their own volition in order to protect their homes and families. The border area is essentially undefined, with many Lebanese citizens’ homes and farms falling within Syrian territory. Nasrallah claims Hezbollah supporters living there were attacked, harassed and some even killed by the FSA. While many have fled, others stayed to fight.

The justification is technically plausible but does not bode well for stability at the border. That Hezbollah members are fighting inside Syria with the support, if not the command, of the party hints at how Syria’s trauma is increasingly threatening to Lebanon’s vulnerable security.

Masheree’a al Qa’a, a strip of farmsteads along the border to the east of Housh as-Sayed Ali, is all but devoid of its native inhabitants. “Over the past six to seven months as the conflict has moved onto and over the border the families have all fled,” says Abu Mohammad, a philosophy teacher from Zera’aa living in one of the farm houses with his family.

He made the journey to Lebanon once the army started its aerial bombardment of his hometown and he now lives with his extended family in one of the farmhouses approximately one kilometre from the border. Of his two sons fighting in the FSA, one has been detained by the Syrian Army, and the other smuggles supplies to the FSA.

While standing on Abu Mohammad’s rooftop in Masheree’a al-Qa’a a house on the border can be seen burning. There had been a fierce battle between the FSA and the Syrian Army in the area earlier in the day, so the army set fire to the building once night had fallen.

“We moved to the relative safety here, but it is all relative. The first house on the border we moved to was shelled and I was injured and now we have moved here, but there is often cross border fire and you can see where we were recently hit,” he says pointing to where fist sized chunks of concrete have been ripped from the building. A local resident joins the conversation saying at least ten Lebanese civilians have been killed in cross-border attacks in the area over the past year.

The houses closest to the border have almost all been shelled or burnt to the ground and smugglers and fighters only make the journey to the frontier under the cover of night for fear of sniper fire. “The Syrian regime’s forces destroy the houses along the border so the FSA fighters can’t take refuge there or use them for their snipers,” says Ahmad Fliti, municipality official from the Lebanese border town Arsal.

The FSA’s use of the Lebanese border areas to offer refuge to its fighters and run smuggling operations destabilises the region and traps the Lebanese Army in an implacable bind. However, if Hezbollah is being drawn into the affray across the frontier, the repercussions threaten to be far more disruptive.