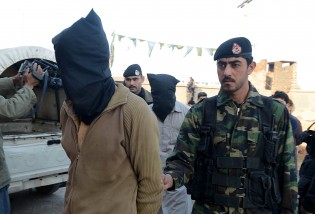 By Ashfaq Yusufzai
Blaming Afghan refugees for a surge in crime, Pakistan’s Khyber Pakhtunkhwa province has placed restrictions on the movement of those who do not possess legal documents to stay in the country.

By Miriam Gathigah
Somali militia groups are beginning to operate in Kenya’s remote and arid North Eastern Province, an area that borders southern Somalia – a former stronghold of the extremist group Al-Shabaab.

By Zak Brophy
A group of six men listen as voices crackle through a walkie-talkie. They are sitting in a farmhouse in the north of Lebanon less than a kilometre from the Syrian border. The sound of gunfire and shelling in the distance sporadically punctuates the atmosphere. One of the group returns to the room after taking a telephone call. “Good news from the battle,” he exclaims with a smile.
ADVERTISEMENT ADVERTISEMENT