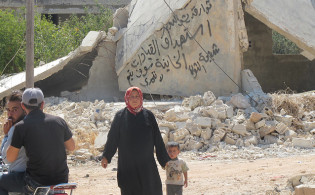 By Zak Brophy
Two floors have been ripped from the top of an apartment block in Aleppo in northern Syria. A lone man stands amidst the rubble four stories up after a missile from one of his own government’s fighter jets smashed into the building that morning. With his arms crossed, the solitary figure surveys the destruction around him.
ADVERTISEMENT ADVERTISEMENT