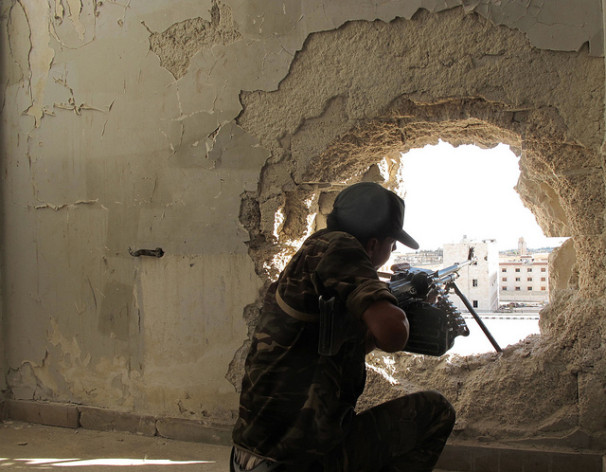 An FSA fighter has to look out on many fronts now. Credit: Shelly Kittleson/IPS

The population of the nearby town Al-Dana has swelled by “tens of thousands” over the past two years, one FSA fighter from the area told IPS, as many fled closer to the border from areas under more frequent attack.

This hill had been covered with trees before last winter, when inhabitants and the internally displaced were forced to cut them for fuel to keep warm. It now bears only rocks and stumps, but remains one of the few places in the area where a cell phone signal can be picked up.

A shopkeeper from the area who is active in the Farouq Brigades, one of the largest units of the FSA, said that when the Islamic State of Iraq, an Islamist group active in Iraq and Syria and Al-Sham (ISIS), an al-Qaeda linked organisation, set up checkpoints in the town and took over the area, all the shops were forced to shut down at prayer times. Punishments for crimes had grown in severity, he said.

He stressed, though, that we have “bigger problems to deal with right now.”

Another local person mentioned that the fundamentalist groups tended to occupy areas already taken by other anti-regime brigades, implying that they leave the tougher battles to others.

Many FSA fighters IPS spoke to in the Aleppo and Idlib regions in recent days said that their plan was that after the Assad regime fell, the more fundamentalist groups would be dealt with. A few even said they expected a full-blown war against them afterwards.

An early sign of this came on Sep. 18, when heavy fighting broke out in the northern town of Azaz between an FSA brigade and ISIS, reportedly after one of the Al-Qaeda affiliate’s fighters was filmed in a clinic by a German aid worker.

When this IPS correspondent crossed the town north of Aleppo a few days before, rubble from over two years of shelling and strikes was visible on the streets. Several armed foreign fighters locally known simply as ‘muhajiroun’ were clearly around.

However, this female correspondent – travelling in a vehicle with the commander of a small fighting unit – was easily waved through an ISIS checkpoint just outside of town.

As air strikes and shelling by the regime continue unabated, fighting between anti-regime factions is siphoning off ever more time, attention and manpower from FSA forces stretched preciously thin. Following the outbreak of fighting in Azaz, Turkey closed the nearby Oncupinar border gate indefinitely, thereby choking off the lifeline that had previously enabled humanitarian aid in, and refugees out.

In Ad-Dana, one fighter noted that until four months ago he had continued to go to regime-held Idlib city using a fake ID to pass regime checkpoints in order to pick up his government cheque as a secondary school English teacher. He still teaches part-time, but it has now become too dangerous to cross enemy lines to gain much needed cash, while basic goods grow ever more scarce.

Despite soaring costs, unremitting shelling and the over 100,000 deaths in some two and a half years of fighting, the FSA rebels gathered nevertheless expressed guarded optimism.

“We’re flying,” said Aref Najjar, a former government employee. He told IPS he had spent five years in prison on trumped-up charges after refusing to travel to join the funeral of former president Hafez Al-Assad.

Given the danger, many of the fighters especially from the southern reaches of the province have moved women and children in their families across the border into Turkey.

Mohammad’s 19-year-old wife initially stayed with him in his family home, which has been half destroyed by regime shelling, but she joined his family who had crossed the border into Turkey after the rape of women in neighbouring villages by regime troops and Assad’s irregular shabiha militias became more frequent.

The 25-year-old anti-aircraft expert faulted the rebels for not taking advantage of defected officers’ experience, and for making numerous mistakes as a result. He also noted that of the 80 men he had under his command only 40 currently had Kalashnikovs, and that only fundamentalist groups were able to attract funding.

A few months earlier he decided to grow a beard in the Salafi manner in a bid to raise funds, but continues to smoke and eagerly whips out a picture of himself from earlier this year: shaved and smiling, sporting sunglasses, jeans and a bright red t-shirt.

He told IPS he admired the fundamentalist groups for their “bravery”, citing a number of important gains they had made such as taking the strategic Menagh air base in August after a year-long siege by FSA brigades had proved inconclusive.

Alarm has been brewing for some time among activists, however, and one Syrian journalist noted that “the safest place during an air strike on the ‘liberated areas’ is the ISIS headquarters. People run there because they know the regime won’t hit them,” implying that the most fundamentalist groups are actually collaborating with the regime.

Fighters on the ground, though, tread more carefully. “If foreign fighters come to help Syrians,” said one, “I’m thankful to them.”