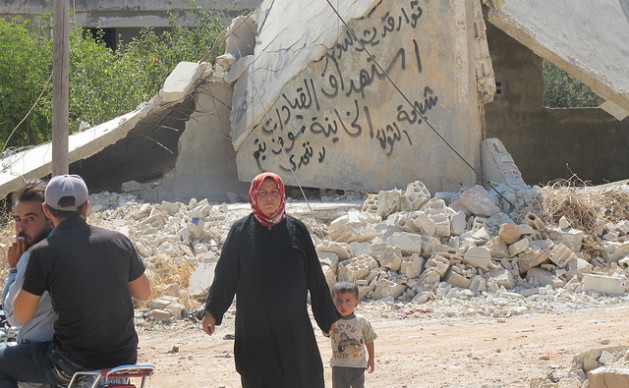 Not far away from this town taken by rebel forces in July is the sniper frontline at Al-Rashideen on the outskirts of Aleppo, the country’s largest city and pre-conflict industrial hub. The rebel headquarters are on the lower level of an abandoned, inconspicuous and mostly destroyed building.

Outside are some 20 pairs of shoes, while inside men sit and rest, Kalashnikovs at their sides except when in the room used for prayer. Then the guns are laid to the side next to a mosquito net hung to sleep under.

Almost all the men were civilians before the war; none would be considered so now.
Rebels have blocked off the road leading to Aleppo with chunks of rubble to prevent civilians in vehicles “getting lost and ending up in the line of fire of a sniper,” an FSA soldier told IPS. The same type of “temporary roadblock” was seen in a number of other locations.

Some buses still ply between major cities but generally use back roads to avoid being targeted. As they pass through both regime checkpoints and FSA ones, civilians must be ‘clean’ in the eyes of both sides – or resort to fake IDs, which can fairly easily be procured for the right amount of money, IPS was told.

Fuel can be found either originating from Iraq, the makeshift oil refineries across rebel-held areas, or smuggled from regime-held ones. The three varieties are of different qualities and different prices, but all are much more expensive than before, leading to knock-on effects on other products.

The lack of bread, fuel, and healthcare weighs heavily on the Syrian population in rebel-held areas. Bakeries and hospitals have repeatedly been targeted by the regime, which refuses to grant Medicins Sans Frontiers (MSF) and other international medical assistance organisations humanitarian access. MSF nevertheless runs a number of clinics at undisclosed locations in rebel-held areas.

At a local field hospital IPS visited in Maa’rrat An-Numan in the southern part of Idlib province on the key highway linking Hama (about 200 km north of Damascus) and Aleppo (about 150 km away), “fighters don’t pay, but civilians pay half the price of medical treatment,” a doctor working on the premises said.

Initially Damascus residents had sent money clandestinely to keep it going, but since this became too dangerous it has been funded by money sent from individual donors in the United Arab Emirates.

The facility regularly sees 30-40 patients a day and previously used its own car to take seriously injured patients elsewhere for treatment. The car has needed fixing for the past month and a half, and the centre currently relies on a combination of “other people’s cars, bicycles, whatever” to get patients to the Turkish border crossing when necessary, the doctor said.

Mosquito nets can be found in homes that can afford them. The incidence of mosquito-borne diseases like leishmaniasis has risen sharply since the war began due to water and fuel shortages, lack of public services and poor sanitary conditions.

Electricity is available in some rebel-held areas but not in Ma’arrat An-Numan. The heavily polluting buzz of diesel-powered generators brings relief to the few that have them.

A home this correspondent was invited to a few kilometres from the Wadi Al-Daif military airport nearby bears the markings of snipers’ bullets on the walls, with one window blown out. Four small children live there with their parents and the father’s younger brother.

Previously a student of English literature at Aleppo University, the 20-year-old brother was forced to abandon his studies, as his area of origin – marked on Syrian student ID cards – was known for rebel activity. He too has now taken up arms.

Similar stories were frequently heard in the days this IPS correspondent spent inside the country. Another man in his early twenties who had lived in Dubai for several years was banned from travelling abroad by the regime on his first trip home after the uprising started. Now fighting with a small rebel brigade that has its headquarters next to his family’s home, he is trying to find a way to get to Europe.

In early September, the United Nations reported that the number of Syrian refugees had risen to more than two million. Many have fled to the bordering nations of Lebanon, Turkey, Jordan, and northern Iraq – into which over 40,000 crossed in only 10 days in August.

Others have gone further abroad: over 400 travelling in two crowded boats were taken ashore in a single day in September by the Italian coast guard.

Down the road from the family’s home is a mosque, with one side blown off and a crater alongside left by a regime rocket.

“The attack happened on a Friday during the weekly community prayer,” an inhabitant of the area said. “Luckily, the mosque-goers were all in the basement as a precaution anyway, so only one child died.”

A ten-year-old boy runs a stand alone on the main road, selling cigarettes, while just outside of town three women with sunbaked, reddened faces and five small children sit under a precarious lean-to. A makeshift ‘petrol station’ is alongside, with its jerry cans, funnels and large plastic jugs, which the women run while their husbands smuggle fuel from government-held Hama.

IPS was told that no schools are open in the area around Ma’arrat An-Numan. No internet access or cell phone signals can be picked up in the area, and the few former school buildings visited by IPS there are now partially destroyed by regime shelling, with some used by rebel forces.

The regime is known to target educational institutions as well as hospital facilities and bakeries in areas out of its control.