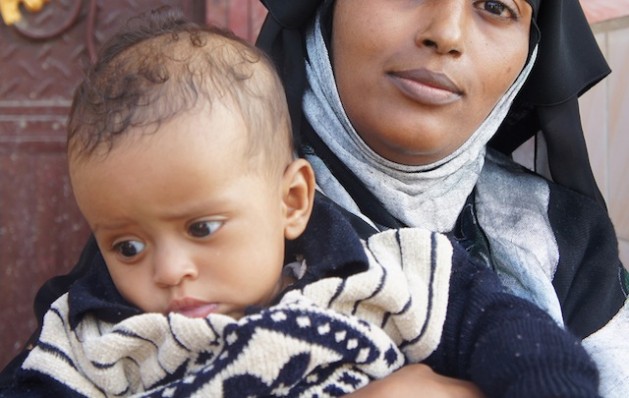 Twenty-one-year-old Aisha clings to her child as she recounts her tale of being trafficked. Credit: Rebecca Murray/IPS

ADEN, Yemen, Jan 2 2013 (IPS) - Twenty-one-year-old Aisha clings to her two children as she recounts her tale of horror. Growing up in the Somali capital Mogadishu, she fell in love and bore a child out of wedlock four years ago. When her family threatened her life for destroying her ‘honour’, Aisha escaped.

She braved the hazardous journey with smugglers across the Indian Ocean to Yemen, and to what she thought was a better life.

Instead, Aisha now squats with four other women in the sprawling, cinderblock slum of Basateen, in the eastern seaport city of Aden. They beg for money in the shabby southern seaport every day, often prostituting themselves for two dollars a trick. They split their meager earnings with their controlling pimp.

“I just want to go to a safer place for my children,” Aisha sighs. “In another country.”

Human trafficking networks with international reach are expanding in Yemen, and with poverty being a key factor, sexually exploited women are the most vulnerable victims.

Bleak as Aisha’s future may look, her fate is better than that of a 17-year-old Ethiopian girl who died alone in a hospital in Haradh, near the Saudi Arabian border.

Bought and sold within the trafficking network operating across Yemen, she was repeatedly raped and beaten until she died. She is now buried far from home and the trafficker who murdered her remains free.

“Between 2011 and 2012 there has been a significant increase in smuggling and trafficking, and of reported cases of violence and abuse perpetrated against new arrivals,” says Edward Leposky, an officer with the United Nations Refugee Agency (UNHCR).

In 2011 UNHCR recorded over 103,000 new arrivals in Yemen. This is the largest influx they have seen since they started documenting statistics six years ago, and Leposky suspects an increase for 2012. The real numbers are thought to be much higher.

Female migrants, mostly Ethiopian and Somali, often flee poverty and violence at home. They fork out hundreds of dollars to reach transit points in Djibouti or Puntland, and also for the dangerous, overcrowded boat rides – which can last one to three days – to Yemen.

Their goal is to reach Gulf states like Saudi Arabia for work. But along the way migrants are frequently gang raped, suffocated from overcrowding or thrown overboard by smugglers, as well as taken hostage by traffickers once they reach Yemeni soil.

“The most trafficking we see happening here is of those coming from the Horn of Africa to Saudi Arabia,” says Eman Mashour, part of the counter-trafficking team with the International Organisation of Migration (IOM) in Yemen.

“There is a network,” she says. “Females can be badly exploited by the traffickers. Women told us they were providing sex to smugglers along the way.”

“Criminal networks extend through Ethiopia, Yemen, Djibouti, and Saudi Arabia,” the report says. “It seems highly likely that these gangs would have contacts in other countries.”

But not all victims of sex trafficking in Yemen are migrants.

The brief marriages between young Yemeni girls and visitors from the Gulf states – a practice commonly known as ‘sex tourism’ – are the result of poverty among large Yemeni families, mostly in rural areas.

“Girls as young as 15 are exploited for commercial sex in hotels and clubs in the governorates of Sanaa, Aden, and Taiz,” says the U.S. Department of State’s 2012 trafficking report.

“The majority of child sex tourists in Yemen originate from Saudi Arabia, with a smaller number possibly coming from other Gulf nations. Yemeni girls who marry Saudi tourists often do not realise the temporary and exploitative nature of these agreements, and some are subjected to sex trafficking or abandoned on the streets of Saudi Arabia.”

A victim of another kind of sex trafficking, Leila, was 15 years old when she finally found refuge at a secret women’s shelter, tucked away in a quiet Sanaa neighbourhood.

Beaten by her family, Leila had run away from home two years before and lived off the streets. An older woman soon picked her up, bringing her to a neighbourhood brothel.

The girls were photographed having sex as blackmail to make them stay, given drugs and forced to service clients at night. The woman pocketed the clients’ cash.

Leila and the female pimp were arrested just before Leila was to be trafficked to Saudi Arabia. Leila served two years in prison for her ‘crime’. Her family disowned her, accusing her of destroying her honour, and her brother issued death threats.

Through a prison visit by staff from the Yemeni Women’s Union, Leila found out about the small women’s shelter – a rarity in Yemen – and was one of their first cases. With psychological help and class work consuming her days, Leila stayed at the shelter until the staff resolved the family dispute.

“The Government of Yemen was unable to provide law enforcement data to contribute to this report, and it did not institute formal procedures to identify and protect victims of trafficking or take steps to address trafficking for commercial sexual exploitation.”

“If we were to look at border management in a more holistic way, so that those that require assistance and protection are referred, and those that might pose a threat are dealt with, this would be in the interest of all countries concerned.”

*Sex trafficking victims’ names have been changed to protect their identity.