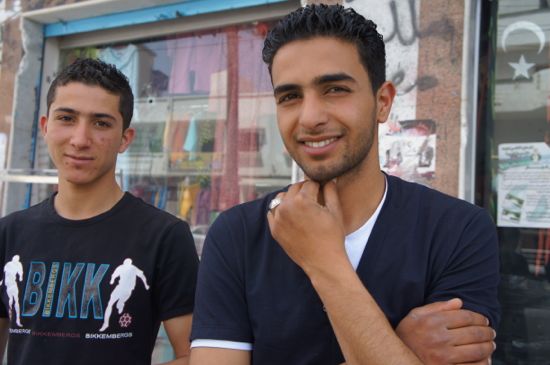 TRIPOLI, Apr 17 2012 (IPS) - The future is uncertain for the gregarious Alhasairi family, living in a downtown apartment block battle-scarred from last year’s overthrow of the Gaddafi regime. Like countless of similar cases across Libya, the property itself is now contested, as the original owners want to return home.

“This is the holy inheritance of Omari Zerti,” declares the colorful graffiti across the whitewashed entrance. The government took the modern, three-storey building from the Zerti family in 1978, under the new stringent Law No: 4 pulled from the dictates of Gaddafi’s Green Book, limiting citizens to ownership of one property each.

Hafed Alhasairi, father of five children, explains how Gaddafi’s wife Safia bestowed Zerti’s residential building to a friend. Ten years ago, Hafed paid over 40,000 dollars for the right to live in, not own, one of the structure’s nine small apartments.

Although oil-rich Libya’s population is just over six million, for years the majority of steadily expanding families have been hemmed in by low-income government jobs and chronic housing shortages.

When Law No: 4 was passed, countless of residential and commercial properties were confiscated by the regime – then given away, sold on, or rented out. Some real estate owners, like Alhasairi’s neighbour on the next block, remain. He resides in a corner apartment in his former building, surrounded by former tenants who pay the government rent.

“This was originally thought of as taking from the rich to give to the poor, but it is only partly correct,” says Saleh Marghani, a Tripoli-based lawyer.

“Many valuable properties were taken by the regime and given as favours, and the original owners were the victims,” he says. “This has created an issue now – as many residents living in them today are not rich, and have nowhere to go.”

This is the case of the Alhasairi family. Belonging to the Amazigh sect – a minority Berber community discriminated against under the Gaddafi regime – Hafed secured a government job in the capital after years working in a coastal oil refinery.

“My wife recently received a visit from the Zerti family at our house,” he says. “They were nice and polite. But they said this was their building, and we had to leave. They are bringing the matter to court.”

Hafed is sympathetic to the Zerti family’s claims but he worries his family, with five young children, will have nowhere to go. “It will take time for the case because the law is still on the books. They are preparing a new law now, and residents might be moved to another apartment. But right now this housing is still under construction,” he points out, referring to Gaddafi’s ambitious plan to build sprawling concrete flats on desert land outside cities like Benghazi and Tripoli.

Colorful shirts on hangers adorn the cheap clothing shop on the building’s ground floor. Abdullah Aldiamy, 22, keeps an eye on the family business. They pay their landlord 2,000 dollars in monthly rent, and Aldiamy believes the landlord in turn pays as little as ten dollars to the government for the space; raking in a handsome profit. The Zerti family has dropped by four times to talk with him, Aldiamy says. He shrugs and drags on a cigarette. “I gave them the landlord’s phone number,” he says.

After enduring international isolation in the eighties and nineties, as part of Libya’s ‘opening up’ period, Gaddafi, prodded by his son Saif al-Islam, established a property compensation committee in 2007, led by the current transitional government head, Mustafa Abdul Jalil.

“Some people were provided compensation but it was of very little value,” explains Marghani. “Many did not dare to apply, especially those who fled the country. And many did not think it was serious. Saif’s project for Libya was not legitimate.”

Marghani believes time is one of the biggest challenges to untangling property disputes. “Properties have changed hands since the initial confiscation, and many don’t know who the original owners are. When Gaddafi ordered the destruction of the land registry in 1982, very important evidence was lost,” he says.

“Now some are having a hard time proving they own the properties. Some have a certificate from 1970, but this is no guarantee they did not sell it before 1978,” he says. “Also, some of the occupiers had rented the properties from the original owners before 1978, and the families stayed and continued to pay rent to the government.”

Last month the Ministry of Justice convened a committee to review the complex Law No: 4, and propose fair solutions for the unique circumstances of current occupants, and compensation for original owners. But the committee’s decisions have not yet been made public, and former owners are growing impatient.

Marwan El Jondi grew up in exile in California after his father, a successful Tripoli businessman, had his properties confiscated by the Gaddafi government. Last year, his family took the risk to return and file a petition with the compensation committee. “Someone on the committee said, ‘I’ll give you six million but give one million to me,” El Jondi says in disgust. “His property was worth a lot more than that. But you can’t blame people for paying a bribe, this is how the country worked.”

El Jondi is one of 400 members of a property owners’ advocacy, spearheaded by Shakr Mohamed Dakhil, the son of one of Libya’s most prominent businessmen in the 1970s.

Dakhil fondly remembers growing up in the villa in Tripoli’s leafy downtown, now home to the Palestinian Embassy. “We had property that valued about 300 million dollars in the 1970s,” he says. “They confiscated it all in a couple weeks – they issued some laws and took everything.”

Dakhil’s organisation is petitioning Prime Minister Abdurrahim El-Keib’s office to repeal Law No: 4 immediately. He claims the majority of their members are not wealthy, and are eager to reclaim their homes for retirement.

“Properties were confiscated overnight, and this is how they should be returned,” he says. “We don’t want compensation, we want our properties back. Those tenants that can afford to pay rent in apartments can stay. The government should subsidise those that cannot, until they can move them into new housing.

“Many owners want to take the law into their own hands, and take back their properties by force. They are going in with guns bringing some of their friends. Of course we don’t want our members to do this.”