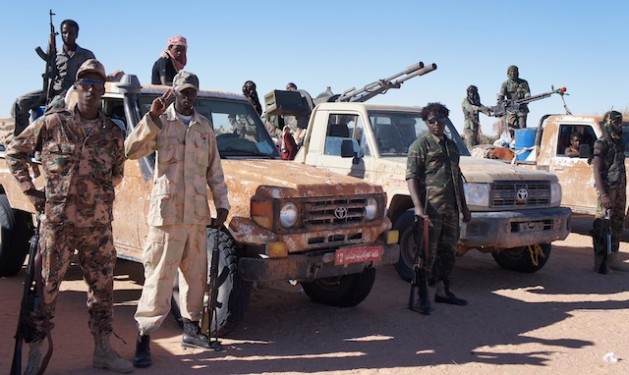 The Tabu border guard in the Sahara in southern Libya. Credit: Rebecca Murray/IPS.

Far from their home base of Kufra, hundreds of miles to the east, these men belong to a desert border patrol loyal to charismatic Tabu commander Issa Abdel Majid Mansour.

They police the country’s vast and seemingly impenetrable southern frontier with Sudan, Chad and Niger – an arduous off-road trek over towering sand dunes, volcanic rock and scattered minefields – using smugglers’ markers and the stars as a guide.

The indigenous, semi-nomadic Tabu, marginalised by Muammar Gaddafi under his ‘Arabisation’ campaign, staked out a leading role during the 2011 revolution with a goal to secure their civil rights.

Combining their intimate knowledge of the Sahara with a tribal network spanning both sides of the borders, they forged a successful blockade against pro-regime reinforcements.

When the revolution was won, a grateful transitional government controversially awarded Mansour oversight over vital desert crossings to the detriment of Kufra’s majority Arab Zwai tribe.

The Zwai, whose ties stretch over oil-rich territory to Ajdabiya, 150km south of Benghazi, previously benefited from Gaddafi’s divide-and-rule tactics.

Besides securing national oilfields, Mansour says their priority is to prevent extremist militias, including Al Qaeda, from the lucrative business of smuggling subsidised fuel and food out of Libya, and ferrying weapons and drugs in.

“I worry about terrorists,” he says intently. “They are dangerous – we need to stop them getting more power in the desert.”

Security is a critical concern for the Libyan government, especially in the aftermath of the deadly attack on the U.S. consulate in Benghazi by a suspected Islamist militia last month.

Jolted into action by a subsequent outpouring of public outrage, the government now faces an uphill battle to integrate or disarm poorly trained armed groups loosely affiliated with the state security apparatus along Libya’s coastal belt.

The Tripoli-based government has failed to address tribal and economic grievances at the heart of this year’s deadly clashes between Tabu and Arab tribes in the southern trade hubs of Kufra and Sebha, now governed by fragile ceasefires.

On an international level, competing regional interests have reduced information-sharing between foreign embassies and a cohesive approach to government ministries.

The U.S. believes Islamic extremist groups, including Al Qaeda, are trying to forge supply lines through southern Libya to its neighbours. It appears poised to introduce a more robust role for the U.S. Africa military command, AFRICOM, in its expanding ‘war on terror’.

Meanwhile, the French strive to retain a monopoly on the mineral-rich region, which they traditionally regard as their post-colonial backyard.

Navigating east across the steep, Saharan sand dunes, a surreal concrete enclave looms in the distance. This is the remote Kufra oasis, once a welcome sight for tired desert travelers.

When Kufra’s violence ended in an uneasy ceasefire last June, the Zwai erected the barrier, encircling the bitterly divided town and its population of 44,000.

The Zwai are convinced that the town’s Tabu community is mostly foreign, and is seeking to carve out an autonomous homeland. Their other concern is control over the south’s most profitable livelihood, smuggling.

Victors in the revolution, Tabu smugglers eek out a subsistence living quite freely, crisscrossing the borders in small Toyota pickup trucks loaded with cheap fuel and migrants.

But the large commercial trucks owned by Zwai businessmen – who until recently made small fortunes from illicit border trade – currently stand idle.

“The Zwai, economically speaking, want to control the area from Kufra towards the Egyptian and Sudanese border because of smuggling. They call it trade, but it’s actually smuggling,” says Fathi Baja, professor of political science at Benghazi University.

“There are also Islamist groups that want to control borders,” he adds.

Tabu and Zwai residents now stick to their heavily guarded neighbourhoods in Kufra.

Small numbers of official army troops guard the town’s invisible borders, having replaced the Shield of Libya auxiliary forces initially dispatched as a neutral buffer after clashes in February.

“The Minister of Defence gave orders to Islamists to go down, control the borders and sort out the issue,” says Rami Al-Shahiebi, one of the few journalists who travelled to Kufra in February.

The undisciplined Shield soon turned their weapons on the Tabu, Al-Shahiebi says. Convinced by the more media-savvy Zwai and Libyan broadcasts from Tripoli that ‘foreigners’ were invading, fighters trekked from as far as the coastal town Misrata for battle.

After hundreds were killed and the Tripoli government was sufficiently embarrassed by the role of their appointed ‘peacekeepers’, a ceasefire was brokered between the Shield and Tabu in June.

Fawzia Idris, an outgoing 37-year-old Tabu nurse in Kufra’s Shura district, is part of a volunteer effort to plant one-foot-tall saplings amongst the piles of rubbish. “To make the neighbourhood beautiful,” she explains.

“Racism and control of the border are the big things,” Idris says. “We are Muslim, but maybe because we are black and not white they think we are not Libyan. The same people who are working with Gaddafi are still in charge. There is no change.”

The Tabu maintain close familial ties in Chad, Niger and Sudan. Although many don’t own Libyan citizenship papers, first issued under King Idriss in 1954, they can trace family ancestors back to the same Libyan tracts of land.

The Tabu bore the brunt of Gaddafi’s rage over the defeat of Libya’s war with Chad over the mineral-rich Ouzou Strip in 1996. Many were stripped of citizenship, deprived of education, health and work, and had their homes demolished.

An estimated 4,000 of Kufra’s Tabu residents are now hemmed into the impoverished ghettos of Gadarfa and Shura. Rotting piles of garbage surround shacks built with sticks, cardboard and jagged pieces of corrugated iron. Homes, schools and the makeshift clinics are pockmarked or blackened by mortar rounds from the recent fighting.

The Tabu talk with deep bitterness about what they see is the transitional government’s betrayal of promises to grant them equal rights after their revolutionary role, and the prognosis for a Libyan constitution inclusive of minority rights appears dim.

Hassan Mousa, a Tabu military spokesman from Kufra, is direct. “The stability of the south depends on Tabu rights. And Libya’s stability depends on the south’s stability,” he warns.