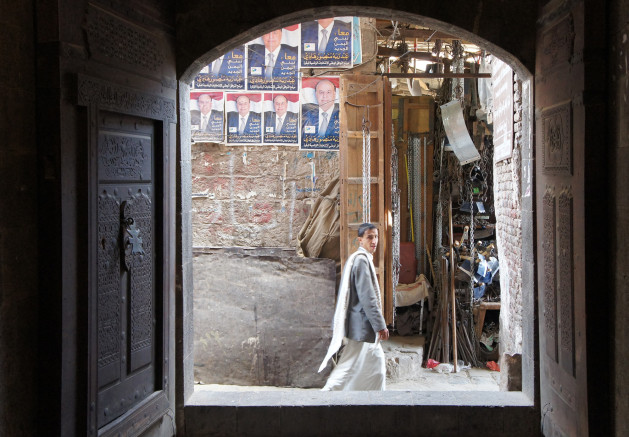 The heritage of old Sanaa is under threat. Credit: Rebecca Murray/IPS.

SANAA, Jun 29 2013 (IPS) - As the month of Ramadan nears, shop owners in Sanaa’s old city souk stock up on goods. For men like Ali Al-Fakri, who sells jambiyahs, Yemen’s traditional daggers held in place with richly embroidered belts, the gift-giving holiday marking Ramadan’s end is the busiest time of the year.

Al-Fakri’s handmade jambiyah belts are sought after for their craftsmanship and detail. But in Yemen’s dismal economy and at 70 dollars a belt, his family’s business is losing money to mass-produced imitations that are a tenth of the price.

“Before, I sold nearly double the amount for special occasions,” Al-Fakri said.

In the souk it is not just Yemen’s traditional foods and handicrafts, like coffee, honey, fabric and pottery, which are endangered by cut-rate imports. The authenticity of Sanaa’s historical old city, built before the 11th century and declared a UNESCO ‘World Heritage’ site in 1986, is itself under threat.

"In ten years time, most of the old city will be fake. It will look old, but it won’t be.”

Acknowledging Yemen’s political turmoil since the start of the revolution in 2011, UNESCO has asked the government of Yemen to tidy up its act by next year.

But with few tourists, a bleak economic forecast, corrupt institutions and ongoing power struggles, the preservation of Sanaa’s old city and its handicrafts ranks low on the government agenda.

“Taking care of culture now is hard to prioritise,” said minister for culture Abdullah Awabil Manthuq. “But it is key for social development and the economy.”

The old city has gone through drastic demographic and physical changes in the past 30 years. Its traditional families started leaving in the 1980s, trading in their ancient homes for brand new villas on the capital’s expanding outskirts.

Sanaa was hit by a population boom in 1991 when Saudi Arabia expelled hundreds of thousands of Yemeni labourers in the run-up to the first Gulf War, as punishment for then president Ali Abdullah Saleh’s support for Iraqi President Saddam Hussein.

“The old city became occupied by outsiders,” Marco Livadiotti, a cultural heritage expert who has resided in Sanaa for decades told IPS. “Then it started declining, with few controls.”

The ancient souk – filled with fabrics, household goods, spices, jambiyahs and jewellery – has expanded in recent years. There are stories about corrupt deals, and of property owners leaving water taps running until ancient structures fall down, to clear the way for new homes with ground level shops.

Nagi Thowabeh, new head of the General Organisation for the Preservation of Historic Cities of Yemen, says family ownership disputes are detrimental.

“When a building gets passed down for generations, there is a dispute about who is responsible for reconstruction,” he said. “Some family members have moved away and can’t afford to, and some want to sell it. So you find houses collapsing.”

Thowabeh believes he can stop the damaging trend. He is working with Sanaa’s municipality to establish guidelines, close illegal shops, remove metal doors and advertising, and fund rehabilitation.

Traditional red and while checkered keffiyehs dangle from the walls of Hussain Naji Gazi’s fabric shop tucked into a souk alleyway. They are from China and priced just over two dollars each – half the price of locally-made keffiyehs. “We tell the Chinese what we want and they make them,” he said.

Gazi’s shop, like those of his neighbours, is stacked with scarves from Oman, India and Kashmir. “We used to make clothes here but these are cheaper,” he said. “Now everything is from everywhere.”

Around the corner in a renovated trading house, or caravanserai, the local charity Hope in their Hands seeks to attract female volunteers to reverse the trend by weaving and selling traditional Yemeni handicrafts, like clothes and jambiyah belts.

But with few tourists around due to security concerns, and with 60 percent unemployment, it is hard to tell how much of an impact the higher-priced products are making.

“Historically, old Sanaa is a souk where things come from everywhere,” said minster of industry Saadaldeen Talib, who is pushing to brand Yemen’s world famous honey and coffee, both currently eclipsed by foreign imports.

“Unless there is a good market that supports local handicrafts, and an institution to help in the training and nurturing of them, they will slowly die out,” Talib said.

Marco Livadiotti, who used to work in Yemen’s tourism business, underlines the urgency of investing in Yemen’s historical sites, and the handicrafts within.

“Everything is finished – the water, oil and fisheries. There is overpopulation, and no industry,” he said. “Yemen needs to invest in tourism, because when they make peace, it will be the only thing they have.”