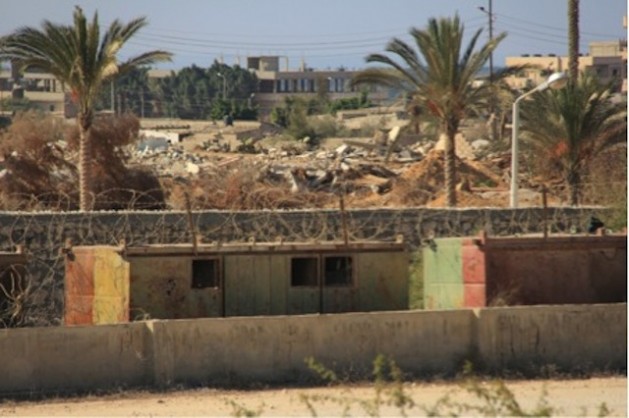 Underground trade tunnels destroyed on the Egyptian side of the border with Gaza. Credit: Khaled Alashqar/IPS.

GAZA CITY , Jan 10 2014 (IPS) - The border between Egypt and the Gaza Strip used to buzz with activity until a few months back as traders brought in an array of Egyptian goods – from food supplies to raw material – through hundreds of tunnels.

But these underground structures, located 40 km from here, between Rafah in Gaza and Sinai in Egypt, have fallen silent.

Things came to a grinding halt after the Egyptian army came to power in Cairo. Calling them a security threat, it launched a systematic military campaign against the tunnels, destroying them, along with the houses under which they were built on its side of the border.

“Never before have we faced this kind of pressure from the Egyptian army."

For people in Gaza, home to 1.7 million people, the closure of the tunnels has choked a lifeline. Thousands of tunnel operators, traders and workers have been hard hit.

“Never before have we faced this kind of pressure from the Egyptian army and, it seems, things are going to get worse,” said Abu Nabil, a Gaza resident who gave only his nickname for security reasons. He had operated a tunnel on the Palestinian side since 2007.

Nabil said more than 90 percent of the passages, most of which are privately operated, have been destroyed by the Egyptian military, completely paralysing trade through the tunnels.

He used to employ 20 workers in his tunnel. They would transport goods, food supplies, electronic equipment and construction material from Egypt to Gaza. Now these employees – among an estimated 20,000 tunnel workers – are jobless.

The tunnel area stretches more than eight kilometres along the border. It’s not open to the public, except with permission from the ruling Hamas party in Gaza. It is monitored by Hamas security forces on the Palestinian side.

While the Egyptian army has established a buffer zone of 500 metres along the border and set up security checkpoints, operators are trying to find a way out. Nabil is trying to extend the length of his tunnel so that it can bypass the buffer zone.

But problems are set to persist as, for the Egyptian authorities, the tunnel trade is illegal.

The authorities in Egypt also point out that goods sent into Gaza through the tunnel do not carry a legal stamp or tax.

But it’s a different story in Gaza, where the Hamas government recognises the tunnel trade.

Alaa Alrafati, minister of economy in the Hamas government, told IPS that the closure of tunnels was causing a loss of 230 million dollars every month and suffocating around 1,000 factories and industrial units that were dependent on raw material coming through the tunnels.

Alrafati said the authorities in Egypt and Gaza needed to come to an understanding.

“The government in Gaza is prepared to close down all tunnels on the Palestinian side if an official alternative route can be made available with Egypt to address Gaza’s need for commercial goods and construction material,” he said.

He said Hamas government leaders “are interested in developing relations with Egypt.”

The tunnels flourished as they were free of restrictions and represented a way out of the Israeli siege on Gaza. Some studies indicate that the tunnel trade was worth one billion dollars a year.

Professor Sameer Abu-Mdalla, dean of the economics faculty at Al-Azhar University in Gaza, told IPS that the total number of tunnels before 2006 was 60, but following a blockade by Israel in 2007 and the closure of border crossings, the number mushroomed to about 1,000.

He said the tunnels helped meet 60 percent of Gaza’s needs for raw materials and other goods.

Abu-Mdalla said destruction of the tunnels could push the unemployment rate up in the Gaza Strip.

He said the Hamas government had legitimised the tunnel trade and introduced guidelines and taxes. Hence, 15 percent of the government budget came from the tunnels and other related sources.

He pointed out some negative aspects as well, however.

“For example, the tunnels did not generate development in Gaza and led to the emergence of around 800 millionaires who used the income from operating tunnels for money laundering.”

The tunnels were allegedly also a conduit for Palestinian militant groups to smuggle weapons into Gaza for use against Israel. Besides, illegal drugs were being smuggled into the small and crowded territory through them, it was alleged.

With the closure of the tunnels, however, it’s the common people of Gaza who are paying the price. Be it poverty, unemployment or isolation, it has worsened their life in every way.