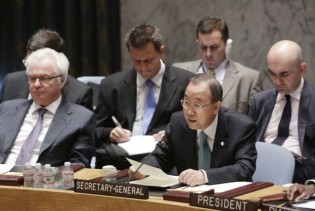 By Thalif Deen
The United Nations has reached a virtual dead end trying to resolve the civil war in Syria - primarily as a result of the stalemate in peace talks and the continued deadlock in the Security Council.

By Thalif Deen
When the Cold War peaked in the late 1960s and '70s, the United States and the then-Soviet Union were armed with one of the most effective non-lethal weapons in their diplomatic arsenal: a veto in the U.N.'s most powerful body, the Security Council.
ADVERTISEMENT ADVERTISEMENT