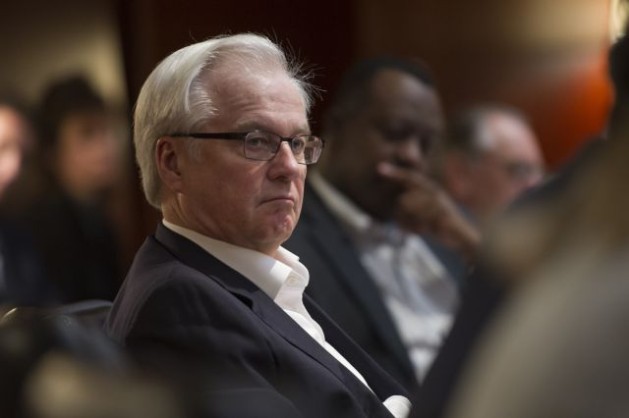 Vitaly I. Churkin, Permanent Representative of the Russian Federation to the UN. Credit: UN Photo/Eskinder Debebe

UNITED NATIONS, Aug 13 2013 (IPS) - When the Cold War peaked in the late 1960s and ’70s, the United States and the then-Soviet Union were armed with one of the most effective non-lethal weapons in their diplomatic arsenal: a veto in the U.N.’s most powerful body, the Security Council.

Both superpowers never hesitated to deploy the veto to further their national interests or protect their allies from condemnation or sanctions – including Israel, Hungary, Algeria, Vietnam and Panama, and in the post-Cold War period, Myanmar (Burma), Zimbabwe and Syria.

“Between the founding of the United Nations in 1945 and the advent of detente in the late 1960s, the Soviet Union used its veto power more than 100 times, almost always as the sole dissenting vote,” Dr. Stephen Zunes, a professor of politics and international studies at the University of San Francisco, told IPS.

The United States did not use its veto power once, he added.

By contrast, however, between 1969 and the dissolution of the Soviet Union in 1991, the Soviets used their veto power less than a dozen times while the United States vetoed 69 resolutions, also usually as the sole dissenting vote, he said.

In the subsequent 22 years, the United States has used its veto power 14 times and Russia 10 times, most of the time as the only negative vote, said Zunes, who has written extensively on the politics of the Security Council.

Syria as a litmus test

As the rift between the United States and Russia has gone public over the granting of temporary asylum in Russia to U.S. whistleblower Edward Snowden, the next litmus test would possibly be a new Security Council resolution to sanction the beleaguered government of Syrian President Bashar al Assad.

But in the current environment will such a resolution survive?

The last three Western-inspired resolutions, and a stillborn draft, against Syria were vetoed by Russia, along with China.

The Snowden asylum has not only undermined relations between the two superpowers but also between U.S. President Barack Obama and Russian President Vladimir Putin.

At a press conference last week, Obama couldn’t resist the temptation of implicitly taking a passing shot at Putin.

After confessing he did not have a “bad personal relation with Putin”, Obama told reporters, “I know the press likes to focus on body language, and he’s got that kind of slouch, looking like the bored kid in the back of the classroom.

“But the truth is that when we’re in conversations together, oftentimes it’s very productive.”

Besides any sanctions against the Syrian government, the two superpowers also have to deal with several other thorny issues, including missile defences in Europe, nuclear disarmament, Iran’s nuclear programme and an upcoming peace conference on Syria – where Russia is insisting on the participation of Iran, which the U.S. opposes.

Samir Sanbar, a former U.N. assistant secretary-general who once headed the department of public information, is confident the U.S.-Russia rift would have fewer negative consequences on the United Nations.

“Big powers with worldwide interests are usually inclined to act more practically at the Security Council than their political rhetoric may sound,” Sanbar told IPS.

He pointed out that even during critical moments in the Cold War era, like the 1962 Cuban missile crisis, “They first tried to pressure through their proxies or communicate through intermediaries, reserving their vetoes as a last resort in the knowledge that holding it as a [trump] card could be more effective than actually using it.”

During the “cold peace period”, he said, the exclusive club of two worked more in tandem than others presumed, for example, on the selection of a secretary general.

On certain crucial issues, they seemed to coordinate fairly closely to the point that some independent insiders wondered whether the two superpowers shared a joint list of operatives, said Sanbar, who served under five different secretaries-general.

On other issues, he said, they seriously disagreed with a real threat of veto, but the then-secretary general who sensed the risk would actively attempt to lighten the atmosphere.

Incidentally, one famous case of an earlier clash was about the 1950-53 Korean War when the Soviet delegation angrily boycotted the Security Council’s deliberations and thus was unable to block a swiftly-passed resolution approving the deployment of troops there.

“And will he, or could he, make a special effort to ease tension before the high-level debate of the General Assembly next month or would U.S. Secretary of State John Kerry and Russian Foreign Minister Sergey Lavrov take care of business as usual?” speculated Sanbar.

Zunes, who also serves as a senior policy analyst for the Foreign Policy in Focus project at the Institute for Policy Studies, told IPS the tough stance taken by the United States over Snowden’s temporary asylum has stirred up nationalist sentiments across the political spectrum.

He said the Russians can point to U.S. hypocrisy in Washington’s refusal to extradite former U.S. spy chief in Italy Robert Seldon Lady back to Italy to face kidnapping charges for abducting an Islamist cleric off a Milan street in 2003 and sending him to Egypt for torture; and the refusal to extradite Gonzalo Sanchez de Lozada and Carlos Sanchez Berzan to Bolivia to face charges for ordering the massacre of scores of indigenous peasants.

Additionally, there was also the refusal to extradite Luis Posada Carriles, who is wanted in several Latin American countries for a series of terrorist bombings, including blowing up a Cuban airliner in Barbados which killed 73 people.

Speaking on condition of anonymity, an Asian diplomat told IPS, “I don’t think we are heading back to the days of the Cold War.”

Things have moved on since the “fall” of Communism and the dismantling of the Berlin Wall in 1989-1991, he said. And Russia is not the threat that it was perceived to be to the U.S. or to the rest of the non-Communist world.

He said relations between the U.S. and Russia are also not the same – they have more substantive ties at all levels.

“The relationship will get colder in some aspects but I don’t think the two sides will allow it to go cold again,” he said. “And the relationship between the U.S. and Russia will continue more or less in the same vein in Security Council.”