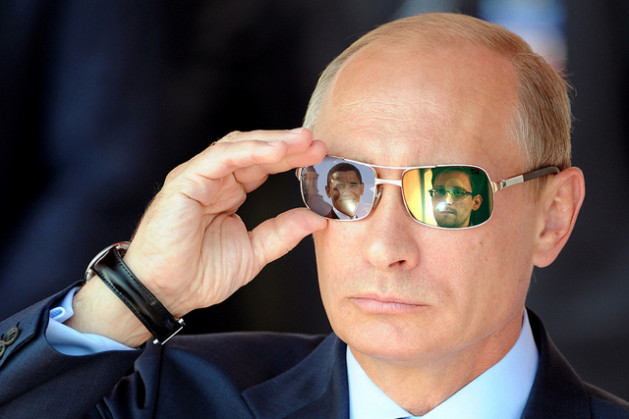 UNITED NATIONS, Aug 7 2013 (IPS) - The growing political rift between the United States and Russia triggered by the granting of temporary asylum to U.S. whistleblower Edward Snowden, who is now holed up in Moscow, is threatening to further undermine relations between the two superpowers at the United Nations.

With the U.S. decision Wednesday to call off an upcoming summit meeting between U.S. President Barack Obama and Russian President Vladimir Putin, which was scheduled to take place in Moscow early September, the negative fall-out is expected to have an impact on several politically sensitive issues, including the civil war in Syria, Iran’s nuclear programme and the proposed reduction in nuclear arms.

"Even as the U.S. and Russia engage in a public spat over Snowden, their overriding bilateral interests will be in maintaining some kind of arms reduction relationship." -- Dr. Rebecca Johnson of the Acronym Institute

Russia, along with China, has already vetoed four Western and U.S. inspired Security Council resolutions aimed at punishing Syria – and the chances of any future U.N. sanctions on Damascus remain remote.

“The strained political relations between the U.S. and Russia will further reduce the Security Council to a non-entity,” warns an Asian diplomat, speaking on condition of anonymity.

At the same time, he pointed out, the on-again, off-again Geneva conference on Syria looks to be another casualty.

The growing confrontation between the two superpowers also comes amidst the first-ever high level meeting of the General Assembly on nuclear disarmament scheduled to take place Sep. 26.

In a speech at the Brandenburg Gate in Berlin last June, Obama called for drastic cuts in nuclear weapons, which was expected to be on the agenda of a proposed nuclear summit in 2016.

Tilman A Ruff, co-chair, International Steering Group and Australian board member of the International Campaign to Abolish Nuclear Weapons, told IPS the disagreement between Russia and the U.S. over Snowden could be used by the US as a pretext to fail to make progress on disarmament.

“That is why the 184 U.N. member states that don’t have nuclear weapons should stop being held hostage by the nine nuclear armed states,” he said.

They should take the lead and begin negotiating a treaty to prohibit nuclear weapons, paving the way for their eradication, said Ruff, who is also an associate professor at the Nossal Institute for Global Health at the University of Melbourne.

Dr. Rebecca Johnson, executive director of the Acronym Institute for Disarmament and Diplomacy, told IPS the United States and Russia have far too many mutual interests at stake for Russia’s granting of temporary asylum to Edward Snowden to derail them.

“This won’t be a return to the Cold War,” she said, sounding less pessimistic.

She pointed out that Putin imprisoned Russian nuclear analyst Igor Sutyagin for over 11 years, and is as keen as the United States to prevent exposure of security and intelligence practices and mistakes.

“So even as the U.S. and Russia engage in a public spat over Snowden, their overriding bilateral interests will be in maintaining some kind of arms reduction relationship,” she said.

As more and more governments raise concerns about the humanitarian consequences of nuclear weapons, said Dr Johnson, Russia and the U.S. will probably want to put on a strong show of P5 solidarity at the High Level Meeting at the U.N., in the hope of heading off the growing calls to ban nuclear weapons globally.

Ruff told IPS that nuclear weapons pose a mortal danger like no other to everyone, wherever they live.

With 16,200 (94 percent) of the world’s 17,270 nuclear weapons between them, Russia and the U.S. bear a heavy responsibility to remove this existential threat.

“Yet both are developing new nuclear weapons and spending between them more than 75 billion dollars per year to modernise their nuclear arsenals, with every indication that they plan to retain them indefinitely,” Ruff noted.

Eradicating nuclear weapons is the most urgent global priority, and must not be derailed because of other issues, said Ruff, who is also the international medical advisor for the Australian Red Cross.