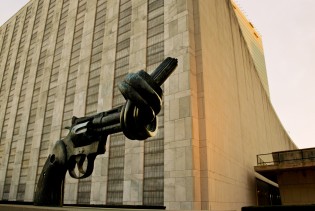 By Beatrice Fihn, Martin Butcher, and Rasha Abdul Rahim
Nuclear weapons are once again high on the international agenda, and experts note that the risk of a nuclear detonation is the highest since the Cold War.

By Thalif Deen
The world’s nuclear arsenal continues to decline – from 15,850 warheads in early 2015 to 15,395 in 2016, according to the latest figures released Monday by the Stockholm International Peace Research Institute (SIPRI).

By Daisaku Ikeda
As we approach the 70th anniversary next year of the atomic bombings of Hiroshima and Nagasaki, there are growing calls to place the humanitarian consequences of their use at the heart of deliberations about nuclear weapons.
Next Page »
ADVERTISEMENT ADVERTISEMENT