Dr. Joseph Gerson is the Director of the Peace & Economic Security Program of the American Friends Service Committee and the Co-Convener of the Peace & Planet Mobilization. 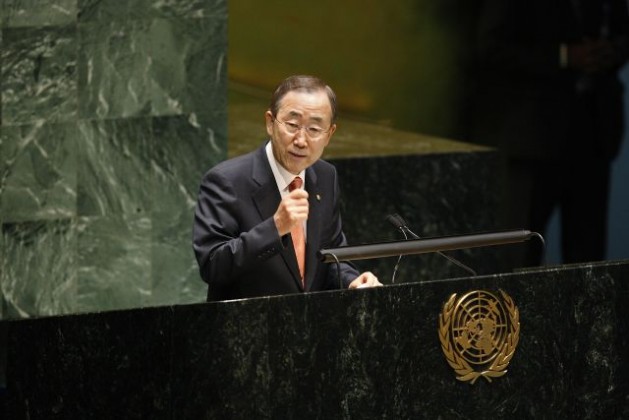 United Nations Secretary-General Ban Ki-moon addresses the 2010 High-level Review Conference of the Parties to the Treaty on the Non-Proliferation of Nuclear Weapons (NPT) on May 3, 2010. Credit: UN Photo/Eskinder Debebe

NEW YORK, Apr 22 2015 (IPS) - On the eve of the Nuclear Non-Proliferation Treaty (NPT) Review Conference five years ago, U.N. Secretary-General Ban Ki-moon warned that governments alone will not rid the world of the specter of nuclear annihilation.

Addressing an assembly of movement and civil society activists, he expressed heartfelt sympathy and appreciation for our efforts, urging us to remain steadfast in our outreach, education, organising and in pressing our demands.

As if to prove the secretary-general’s critique of governments correct, anyone who has been paying attention knows that this year’s Review Conference is in trouble before it starts. It could fail, jeopardising the future of the treaty and – more importantly – human survival.

In the tradition of diplomatic understatement, U.N. High Representative for Disarmament Angela Kane has explained that this is “not the best of times for disarmament.”

Apparently not understanding the meaning and purpose of treaties, and with remarkable disregard for the vast majority of the world’s nations which have long been demanding that the nuclear powers fulfill their NPT Article VI obligation to engage in good faith negotiations to eliminate their nuclear arsenals, lead U.S. Non-Proliferation negotiator Adam Scheinman warned that “countries not pursue extreme agendas or place unrealistic demands on the treaty.”

Joseph Rotblat, the realist Nobel Laureate and single senior Manhattan Project scientist to quit the nuclear bomb project for moral reasons, put it well years ago while speaking in Hiroshima. He explained that the human species faces a stark choice.

We can either completely eliminate the world’s nuclear weapons, or we will face their global proliferation and the omnicidal nuclear wars that will follow. Why? Because no nation will long tolerate what it perceived to be an unequal balance of power, in this case nuclear terror.

Blinded by the arrogance of power, Schienmen and his Nuclear Nine comrades are apparently oblivious to the mounting anger and loss of trust by the world’s governments in the face of the nuclear powers’ disregard for their Article VI obligations, traditional humanitarian law, and the dangers to human survival that follow.

As a U.S. American, I had something of an Alice in Wonderland “through the looking glass” experience observing the U.N. High Level Conference on Disarmament debate in 2013.

After the opening formalities, Iranian President Rouhani spoke on behalf of both his country and the Non-Aligned Movement, stressing three points: Iran does not intend to become a nuclear weapons state.

The P-5 Nuclear Powers have flaunted their refusal to fulfill their Article VI NPT obligation to commence good faith negotiations for the elimination of their nuclear arsenals. And, the United States had refused to fulfill its 2010 NPT Review Conference commitment to co-convene a conference on a Middle East Nuclear Weapons and WMD-Free Zone.

What was remarkable was not Rouhani’s speech. It was the succession of one head of state, foreign minister and ambassador after another who rose to associate his or her government with the statement made by President Rouhani on behalf of the Non-Aligned Movement.

The U.S. response? A feeble and arrogant “trust us”, followed by the announcement that under Chinese leadership the P-5 had almost completed work on a glossary of terms.

Similar dynamics followed at the International Conferences on the Human Consequences of Nuclear Weapons in Mexico and Austria, which were attended by the vast majority of the world’s nations.

Nor will the recent U.S.-Iran deal which the U.S. Congress has placed in jeopardy. On the eve of the 2015 Review Conference the inability of other nations to trust commitments made by the United States are one more reason the Review Conference and the NPT itself could fail.

Add to this the new era of military confrontations, resumption of nuclear (and other) arms races, and continuing nuclear threats from the simulated U.S. nuclear attack on North Korea to the U.S. and Russian nuclear “exercises” over Ukraine.

What are other nations to think when the U.S. is on track to spend a trillion dollars for new nuclear weapons and their delivery systems and every other nuclear power is following suit?

And as anti-slavery abolitionist Fredrick Douglas observed more than a century ago, “Power concedes nothing without a struggle. It never has, and it never will.”

This is why nuclear abolitionists, peace, justice and environmental advocates – including 1,000 Japanese activists carrying five million abolition petition signatures in their suitcases – are returning to New York from across the United States and around the world for the Peace & Planet mobilisation on the eve of this year’s NPT review conference.

We’re anything but starry eyed.

Recognising that change will only come from below, our international conference at The Cooper Union and our rally, march and festival in the streets will press our central demand: Respect for international law.

The Review Conference must mandate the beginning of good faith negotiations for the abolition of the world’s nuclear weapons. And, being the realists that we are, we will be building the more powerful and issue-integrated (abolition, peace, economic and social justice and climate change) people’s movement needed for the longer-term and urgent struggle ahead.