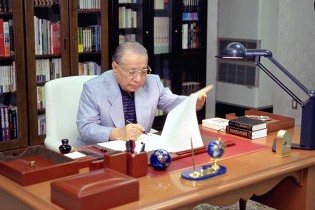 By Daisaku Ikeda
This past February, the Second Conference on the Humanitarian Impact of Nuclear Weapons was held in Nayarit, Mexico, as a follow-up to the first such conference held last year in Oslo, Norway. The conclusion reached by this conference, on the basis of scientific research, was that “no State or international organisation has the capacity to address or provide the short and long term humanitarian assistance and protection needed in case of a nuclear weapon explosion.”

Most Inhumane of Weapons

By Daisaku Ikeda
I believe that most of the world’s citizens would agree that nuclear weapons should be considered inhumane. It is encouraging to see that there is now a growing, if still nascent, movement to outlaw nuclear weapons based on this premise.

For a Denuclearised Middle East

By Daisaku Ikeda
In recent months, the dispute over the nature and intent of the Iranian nuclear development programme has generated increasing tensions throughout the Middle East region. When I consider all that is at stake here, I am reminded of the words of the British historian Arnold Toynbee, who warned that the perils of the nuclear age constituted a "Gordian knot that has to be untied by patient fingers instead of being cut by the sword."

For a Denuclearised Middle East

By Daisaku Ikeda
In recent months, the dispute over the nature and intent of the Iranian nuclear development programme has generated increasing tensions throughout the Middle East region. When I consider all that is at stake here, I am reminded of the words of the British historian Arnold Toynbee, who warned that the perils of the nuclear age constituted a "Gordian knot that has to be untied by patient fingers instead of being cut by the sword."

By Daisaku Ikeda
The human spirit has a truly remarkable capacity -the ability to generate hope from the most devastating of crises. This ability to create value can be seen in the response to the earthquake that struck Japan on March 11.

By Daisaku Ikeda
A meeting called for 2012 on a Middle East free of nuclear weapons is likely to run into difficulties, says Daisaku Ikeda, president of the Buddhist association Soka Gakkai International (SGI).

LEARNING TO BE HUMAN

By Daisaku Ikeda
The smiling faces and laughing voices of children are the true measure of a peaceful and healthy society, much more so than any statistical indices.

By Daisaku Ikeda
A world free of nuclear weapons is no longer utopia - it is a concrete possibility, says Daisaku Ikeda, president of the Buddhist association Soka Gokkai International (SGI).

TOWARD A WORLD FREE OF NUCLEAR WEAPONS

By Daisaku Ikeda
Crying out in opposition to war and nuclear weapons is neither emotionalism nor self-pity. It is the highest expression of human reason based on an unflinching commitment to the dignity of life.

By Daisaku Ikeda
Our world today faces unprecedented problems, for a start, the current environmental and financial crises. Without global solidarity and a conscious commitment to peaceful coexistence both within human society and with the systems of life that support us, it is becoming clear that there is no future for us. We have reached a point where we each need to strive in our own unique way to make the greatest possible contribution to the realisation of human rights.

REVITALISING THE UNITED NATIONS THROUGH THE POWER OF YOUTH

By Daisaku Ikeda
The fundamental avenue for resolving the many challenges of today\'s world is maximising the potential of the UN, the framework of solidarity that was born out of the tragic experience of two world wars, writes Daisaku Ikeda, a Japanese Buddhist philosopher and peace-builder and president of the Soka Gakkai International (SGI) grassroots Buddhist movement. In this article, Ikeda writes that to function in the 21st century the UN must be supported by three pillars that transcend national borders: a shared sense of purpose, a shared sense of responsibility, and shared action. The author writes that it is the creative engagement and innovativeness of young people around the world that holds the key to breaking existing molds and affirming these principles. Steps should be taken to enhance the status of youth within the structures of the UN. The world\'s youth increasingly have a sense of global identity. They are united by a common concern for the fate of our planet, and are connected and networked through new communications technologies.

A CIVILISATION PREDICATED ON DIALOGUE

By Daisaku Ikeda
There has never been a time when it was more important for us to inspire each other by learning from our differences or holding a creative dialogue of the wise, writes Daisaku Ikeda, a Japanese Buddhist philosopher and peace-builder and president of the Soka Gakkai International (SGI) grassroots Buddhist movement. Common to all of the thinkers and leaders from various fields and nationalities with whom I have engaged in dialogue over the years is an earnest prayer and deep determination to see the 21st century become a century of peace and dialogue, in contrast to the century of war and violence that was the 20th. There is absolutely no reason why we cannot rise above the divisive crises that confront our contemporary world. Dialogue is the surest path to peace. And it is a path open to all of us, starting from wherever we are, starting now. Dialogue is an adventure, a means of discovering the uniqueness, mystery, and familiarity of humanity. It is the wellspring of ceaseless and unimpeded value creation.

By Daisaku Ikeda
As citizens of Hiroshima and Nagasaki are painfully reminded of the horrors of atomic bombings that devastated the two Japanese cities in August 1945, one of the country's most influential peace organisations is intensifying its longstanding efforts for nuclear disarmament.

By Daisaku Ikeda
As the United Nations commemorates the 60th anniversary of its landmark Universal Declaration of Human Rights this year, the Tokyo-based Soka Gakkai International (SGI) has called for an international conference on human rights education.
ADVERTISEMENT ADVERTISEMENT