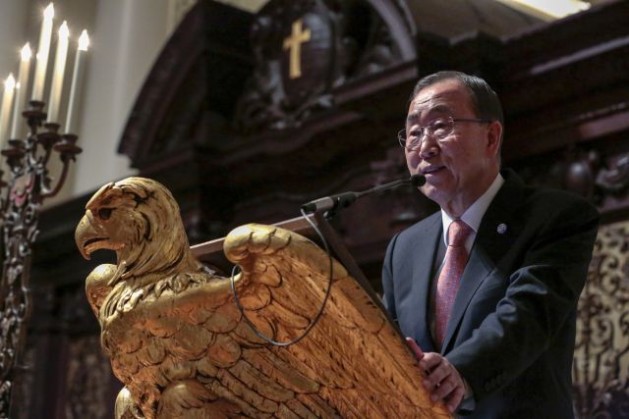 UNITED NATIONS, Dec 5 2014 (IPS) - When Secretary-General Ban Ki-moon was at Harvard University early this week to pick up the ‘Humanitarian of the Year’ award, his thoughts transcended the city of Cambridge, Massachusetts, to the Austrian capital of Vienna which will be the venue of a key international conference on nuclear weapons next week.

But this time around, the focus will be on the “humanitarian impact” of the deadly use of any one of the over 16,300 nuclear weapons that still exist nearly 25 years after the end of the Cold War.

"We may not hear much about next April's NPT Review Conference during the formal debate at the Vienna conference, but that's what it's about." -- Dr. Joseph Gerson

“A single detonation of a modern nuclear weapon would cause destruction and human suffering on a scale far exceeding the devastation seen in Hiroshima and Nagasaki,” warns Austria, the host country for the conference.

The 70th anniversary of those destructive U.S. bombings in Japan will be commemorated in Hiroshima next year.

In his acceptance speech, the secretary-general told the Harvard audience the humanitarian perspective on nuclear weapons is attracting growing attention – as he singled out the Vienna conference due to take place Dec. 8-9.

The last two conferences on the same theme took place in Oslo, Norway in March 2013, and in Nayarit, Mexico in February 2014.

Ban said people are also asking why the world’s nuclear powers are spending vast sums to modernise arsenals instead of eliminating them, which they committed to do under the nuclear Non-Proliferation Treaty (NPT).

“Where are their disarmament plans? They do not exist,” he lamented.

According to the U.S. Congressional Budget Office, the United States alone plans to spend about 355 billion dollars over the next 10 years just to modernise its nuclear arsenal.

And the total estimated cost for modernisation of weapons over the next 30 years is a staggering one trillion dollars.

Asked about the possible outcome of the Vienna conference, Dr. M.V. Ramana, associate research scholar, Programme on Science and Global Security at Princeton University, told IPS, “My hope is that people will come out of the Vienna conference with a continued resolve to eliminate these weapons, not in the distant future as the nuclear weapons states keep promising, but in the near future.”

Referring to the secretary-general’s speech, he said: “It is refreshing to hear a high official speak with such candour. I would like to especially underline what he said: ‘Ultimately, there are no right hands for wrong weapons and add that all nuclear weapons are wrong weapons.'”

His statement that the nuclear weapon states do not have disarmament plans is also sadly spot on, said Dr. Ramana, author of ‘Bombing Bombay? Effects of Nuclear Weapons and a Case Study of a Hypothetical Explosion’.

Ray Acheson, director, Reaching Critical Will, Women’s International League for Peace and Freedom (WILPF), told IPS, “We expect that the outcome of the Vienna conference will reflect the demand from the overwhelming majority of states that we must take concerted action now in response to the evidence about the risks and impacts of a nuclear weapon detonation.”

The logical conclusion of the evidence-based gatherings in Oslo and Nayarit – and now Vienna – is to launch a diplomatic process to prohibit nuclear weapons, she added.

“A treaty banning nuclear weapons would advance nuclear disarmament through its normative force and practical effects,” she said.

The Vienna conference may not launch such a process but it can help set the stage by presenting irrefutable evidence about the dangers of nuclear weapons, challenging the idea that nuclear weapons have any value for defence or deterrence, and providing space for governments, international organisations, and civil society to examine the legal landscape and suggest ways forward, said Acheson.

Dr. Joseph Gerson, director of the Peace and Economic Security Programme at the American Friends Service Committee (AFSC), told IPS, “We may not hear much about next April’s NPT Review Conference during the formal debate at the Vienna conference, but that’s what it’s about.”

With the success of the Review Conference in doubt – given the P-5’s resistance to fulfilling their Article VI obligation to begin good faith negotiations to eliminate their nuclear arsenals, and the failure of the United States to co-convene the promised 2012 Middle East Nuclear Weapons and WMD-Free Zone (Weapons of Mass Destruction) conference – the Austrian government’s goal is to build positive momentum going into the Review Conference, he added.

The P5 comprises the United States, UK, France, China and Russia, the world’s five major nuclear powers, who are also the five permanent members of the U.N. Security Council.

Dr. Gerson said recognising that nuclear weapons abolition cannot be negotiated without the active participation of the nuclear powers, Austrian Ambassador Alexander Kmentt, director for Disarmament, Arms Control and Non-Proliferation, placed a high premium on winning their participation, especially the U.S. and Britain, who now have bragging rights over Russia, China and France.

“The price paid was Austria’s commitment to limit the conference to educational discourse,” he said.

Dr. Gerson said those who demand action steps will be violating their invitations and will have little impact on the chair’s summary, which will lack the bite of Juan Manuel Gomez-Robledo’s summary at Nayarit conference.

“And it will be interesting to see if and how – after their boycotts of the Oslo and Nayarit Conferences – the presence of the Anglo-American nuclear powers leads some to bite their tongues,” he added.

Dr. Gerson also predicted the Vienna conference may reinforce commitments of some to work for abolition, but the men and women of power and most of humanity have known the essentials since the A-bombings of Hiroshima and Nagasaki.

“Most will speak diplomatically, but the hypocrisy of bemoaning the human consequences of nuclear weapons while Washington spends one trillion dollars to modernise its nuclear arsenal and to replace its delivery systems, Britain moves toward Trident replacement, and Russia relies increasingly on its nuclear arsenal in face of NATO’s expansion, will hang heavy over the conference,” he declared.

The government of Austria says nine states (the P5 plus India, Pakistan, Israel and North Korea) are believed to possess nuclear weapons, “but as nuclear technology is becoming more available, more states, and even non-state actors, may strive to develop nuclear weapons in the future.”

Dr. Ramana told IPS delegates to next week’s meeting will certainly be aware that next year will be the seventieth anniversary of Hiroshima and Nagasaki – the bombings “that first made us realise the utterly horrendous nature of the humanitarian consequences of the use of even one or two nuclear weapons”.

“What we do need to remember is that 2015 will also be the seventieth anniversary of the anti-nuclear peace movement,” he reminded.

“Just as nuclear weapons haven’t gone away, the movement challenging these weapons of mass destruction hasn’t gone away,” he added.

Dr. Gerson said governments will position themselves, rehearsing their arguments in the run up to the NPT Review. Meanwhile, out of earshot, serious side discussions will take place to frame and influence next April’s diplomacy.

“Civil society will speak truth to power. We’ll also be drawing on our contacts to build popular force behind our demands that April’s NPT Review mandate the commencement of Article VI’s good faith negotiations to eliminate the world’s omnicidal nuclear arsenals.”

One certain outcome, he said: the Human Consequences process will have been kept alive, to be revisited following April’s NPT Review Conference.

Acheson told IPS that Ban’s remarks at Harvard highlight “why we can no longer afford to wait for leadership from the nuclear-armed states”.

She said their plans to modernise their nuclear arsenals, extending the lives of these weapons of mass destruction into the indefinite future, demonstrate they are not willing to comply with their legal obligation to disarm. “We can’t afford to keep waiting for leadership from nuclear-armed states.”

“The 70th anniversary of the Hiroshima and Nagasaki attacks has already been cited as the appropriate milestone to achieve our goal of launching a new diplomatic process,” Acheson declared.