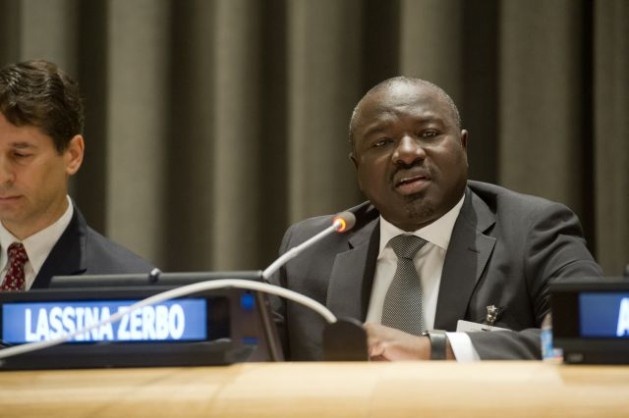 UNITED NATIONS, Nov 23 2014 (IPS) - December 1938 was a decisive month in human history: In Germany, the scientists Otto Hahn and Fritz Strassmann discovered that when bombarded with neutrons, the atomic nucleus of uranium would split.

The discovery of nuclear fission laid the basis of nuclear technology with all its manifestations – in the short term, the most destructive weapon ever devised and used a few years later in the Second World War.

A nuclear weapons programme requires vast resources that could have been allocated to support development and infrastructure – every nuclear test, every warhead represents a school, a hospital or a major road unbuilt.

But God is fair, He unleashed a force of good at the same time: Back in 1938, nearly the same day that Otto Hahn publicised his discovery, a very special boy was born on the other side of the planet in Sri Lanka. His name: Jayantha Dhanapala. In the town of Pallekelle, which later became home to one of our monitoring stations – but to that later.

Jayantha Dhanapala’s life story is linked closely to that of nuclear arms control, and in particular to the Comprehensive Nuclear-Test-Ban Treaty, in short CTBT, that my organisation is tasked with implementing.

Throughout his soaring career, as a diplomat and in the U.N., Jayantha has worked with persistence and eloquence to rid the world of weapons of mass destruction.

In 1995, Jayantha chaired the landmark review and extension conference of the Nuclear Non-Proliferation Treaty. He masterminded the central bargain, a package of decisions that balanced the seemingly irreconcilable interests of the nuclear weapon states and the non-nuclear weapon states.

A critical part of this bargain was the promise that the CTBT, which was still being fiercely negotiated at the time in Geneva, would be finalised no later than 1996, prompting the adoption of the Treaty by the General Assembly on Sep. 10, 1996. So in a way, Jayantha actually fathered the CTBT.

Shortly later, from 1998 to 2003, he served as United Nations under-secretary-general for disarmament affairs. This was a crucial time for nuclear disarmament, particularly for the CTBT as the nuclear tests by India and Pakistan flouted the still young treaty.

Jayantha is active in probably all of the world’s most important advisory boards and international bodies. Notably, he is the president of the Nobel Peace Prize-winning Pugwash Conferences on Science and World Affairs, and a member of the Governing Board of the Stockholm International Peace Research Institute (SIPRI). For these reasons and more, I invited him to join the Group of Eminent Persons (GEM), which I launched in 2013 to ensure an innovative and focused approach to advancing the CTBT’s entry into force.

Although we have not yet reached this goal, the treaty has played an important role in making our planet safer. Although technically labelled a “provisional” secretariat, there is nothing provisional about our work. To paraphrase Hans Blix, another member of the GEM, it is a treaty that has not legally entered into force, with an organisation that is more accomplished in verification than everything else we have seen.

This is in part due to the global network of stations we are building to detect signs of nuclear tests anywhere on the globe. Nearly 90 percent of this system of over 300 stations is complete, including the one in Jayantha’s home town of Pallakelle.

The system, which was recently hailed by U.S. Secretary of State John Kerry as “one of the great accomplishments of the modern world,” has the proven capability to detect nuclear tests at a fraction of the yield of the first nuclear weapon test in the desert near Alamogordo in July 1945.

The international community forcefully condemns any violations of this norm today, as has been the case with each of North Korea’s tests – the only ones to be conducted in this millennium.

Consistent progress has also been made in the area of on-site inspections. This is the CTBT’s ultimate verification measure and involved a team of highly specialised experts searching the ground using a wide range of state-of-the-art technologies. In fact, I am just coming from Jordan where I visited our second full-fledged on-site inspection simulation, the Integrated Field Exercise 2014, which is currently being conducted on the banks of the Dead Sea in Jordan.

Jayantha and I both come from countries in the developing world. One of the most persuasive arguments he has consistently made is the opportunity cost a developing country incurs when embarking on a weapons of mass destruction programme.

In particular, a nuclear weapons programme requires vast resources that could have been allocated to support development and infrastructure – every nuclear test, every warhead represents a school, a hospital or a major road unbuilt.

In Pakistan, for example, where the anniversary of the 1998 nuclear tests is officially celebrated each May, we increasingly observe voices questioning the value of a nuclear weapons programme when parts of the country lack basic necessities such as clean water and electricity.

Developing countries also have much to lose from a nuclear conflict, even one far from their borders. A recent study has shown that even a limited nuclear exchange would “disrupt the global climate and agricultural production so severely that the lives of more than two billion people would be in jeopardy”. This would result in unprecedented famine and starvation far beyond the directly affected areas, especially in the developing world.

It is encouraging to see that Jayantha is actively promoting the CTBT, especially in his home region of in South Asia, where India is one of the countries that have yet to sign the CTBT. To me, Jayantha formulated the most eloquent rebuttal ever to India’s criticism of the CTBT:

“Opposing the CTBT because it fails to deliver complete disarmament is tantamount to opposing speed limits on roads because they fail to prevent accidents completely.”

In conclusion, the world we live in today would be less safe and less civilised were it not for Jayantha Dhanapala. I would like to thank the Inter Press Service and Ramesh Jaura for organising the International Achievement Award and to Soka Gakkai International for supporting it.

*Excerpts from a speech made at an event marking the 2014 IPS International Achievement Award for Nuclear Disarmament at the United Nations on Nov. 17.