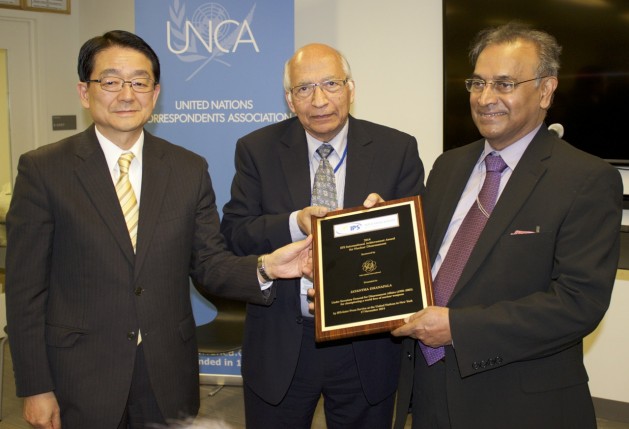 Dhanapala, U.N. Under-Secretary-General for Disarmament Affairs until 2003, has remained committed to the goal of a nuclear weapons-free world since leaving his post, presiding since 2007 over the Nobel Prize-winning Pugwash Conferences on Science and World Affairs.

“A nuclear weapon-free world can and must happen in my lifetime,” Dhanapala told attendees at an official ceremony sponsored by the Buddhist organisation Soka Gakkai International.

“Scientific evidence is proof that even a limited nuclear war – if those confines are possible – will cause irreversible climate change and destruction of human life and its supporting ecology on an unprecedented scale. We the people have a ‘responsibility to protect’ the world from nuclear weapons by outlawing them through a verifiable Nuclear Weapon Convention overriding all other self-proclaimed ‘R2P’ applications.”

The event was attended by U.N. ambassadors including the president of the General Assembly, Sam Kutesa, who said that “the work of organisations such as Pugwash Conferences on Science and World  Affairs – which Mr. Dhanapala presides over – Inter Press Service, our host this evening, or Soka Gakkai International, the sponsor of this award, contributes to raising awareness of the dangers of nuclear weapons and to advocating for their total elimination.”

"The award was created in 1985 with the idea to provide a link between the action of the UN at global level, and actors who would embody that action. It was not in the UN system in any way to recognize individuals, so we set up the IPS UN Award, as a way to help to bridge ideals and practice. IPS set up a very high level selection committee, who received candidates fromm all the IPS network, then spanning all over the world. The awardee was invited to New York, with his or her companion, and was greeted by the Secretary General, with whom he was able to explain his activities, and how those were part of the agenda of the UN. Then there was the ceremony, opened by the Undersecretary General for DPI, with the consign of the award, a crystal globe of the world.

The ceremony was followed by a large reception, which become part of the UN life, and a yearly recurrent event. The award went from a protagonist of Perestroika to a leader in environment, to a woman engaged in breaking the glass ceiling, to an activist in human rights, to a leader of the black movement in the United States, to leaders of global civil society. It was a way to bring to the UN living embodiment of the plans of action which were drafted in the offices of the UN, and bring ideas and goals, in touch with reality.

It is important to recall that until the Rio de Janeiro Conference on Environment and Development of 1992, relations with the civil society were minimal. Only the few organizations recognized by ECOSOC were allowed into the building. With the award, we organized a place for sharing between the civil servants and the activists engaged on the field. This relation did gradually expand, and today the best ally of the UN agenda are the hundred of thousand of NGOs and other organizations that engage in the world over global issues. IPS was their favorite source of information, because it was the only press agency that covered organically and analytically global themes, and therefore was their window to the UN.

At a time in which we sorely miss a mechanism of governance of globalization, the function of IPS as a bridge between global civil society and the UN is even more important. The IPS award can be the symbol of that function, in recognizing the contribution to peace of Sokka Gakai, and its significantly large network all over the world."

Kutesa’s sentiments were echoed by other speakers including Dr Lassina Zerbo, executive secretary of the Preparatory Commission for the Comprehensive Nuclear-Test-Ban Treaty Organisation (CTBTO). Zerbo noted that Dhanapala was born in the same month (December 1938) that German scientists Otto Hahn and Fritz Strassmann discovered nuclear fission.

“In 1995, Jayantha chaired the landmark review and extension conference of the Nuclear Non-Proliferation Treaty. He masterminded the central bargain, a package of decisions that balanced the seemingly irreconcilable interests of the nuclear weapon states and the non-nuclear weapon states.”

The result of this work was that the CTBT, which was being contested in Geneva, was adopted by the General Assembly in 1996. Dhanapala continues to support the CTBTO, as part of a group of experts who work to advance the CTBT’s entry into force.

Zerbo recalled Dhanapala’s criticism of India’s position in opposing the CTBT. India’s criticism of the CTBT has been that it will not move disarmament sufficiently forward. In response to this, Dhanapala has said, “Opposing the CTBT because it fails to deliver complete disarmament is tantamount to opposing speed limits on roads because they fail to prevent accidents completely,” Dhanapala has pointed out.

Collectively known as the “Annex 2” states, India forms part of a group of eight countries that are required to ratify before the treaty before it can enter into force. India, Pakistan and North Korea have yet to sign the treaty, while 5 other states have signed but failed to ratify.

Zerbo also noted the relevance of Dhanapala’s nationality in his advocacy for disarmament and non-proliferation, saying, “Jayantha and I both come from countries in the developing world.

“One of the most persuasive arguments he has consistently made is the opportunity cost a developing country incurs when embarking on a weapons of mass destruction programme. In particular, a nuclear weapons programme requires vast resources that could have been allocated to support development and infrastructure.”

IPS Director General Ramesh Jaura, who read a statement from IPS founder Roberto Savio, spoke of the origins and importance of the award.

“The award was created in 1985 with the idea to provide a link between the action of the U.N. at global level, and actors who would embody that action,” he said.

“The U.N. way is not to recognise individuals, so the award is a recognition of the bridge between ideals and practice.” The award has been resurrected after a six-year hiatus, and will be in place next year again. Additional awards in 2016 and 2017 will focus on the Sustainable Development Goals.

There are several opportunities in the coming months for inroads to be made in nuclear non-proliferation and disarmament. Notably, early next month’s Vienna Conference on the humanitarian impact of nuclear weapons.

In the meantime, Dhanapala called on groups to support the ICAN and PAX “Don’t Bank on the Bomb” divestment campaign, saying, “I appeal to all of you present to make your own practical contribution to nuclear disarmament by joining the divestment campaign. The faded rhetoric of President Obama’s celebrated Prague speech in April 2009 about a nuclear weapon free world has little to show as results unless civil society acts.”