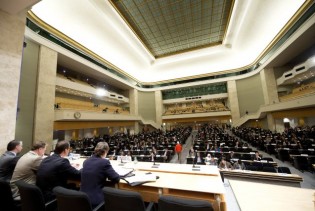 THE DOUBLE STANDARD OF NUCLEAR POWERS

By Ray Acheson
On 5 February, the new Strategic Arms Reduction Treaty (START) entered into force. New START is an agreement between Russia and the United States that sets 1550 as the limit of how many nuclear warheads each country can deploy at any given time (down from 1700-2200 under the old arrangement). The treaty does not affect the number of nuclear warheads each country can possess, which is estimated at 8500 for the US and 11,000 for Russia.
ADVERTISEMENT ADVERTISEMENT