UNITED NATIONS, Jul 11 2013 (IPS) - The growing political uproar over the unlawful denial of European airspace for a jet carrying Bolivian President Evo Morales has spilled over into the United Nations. 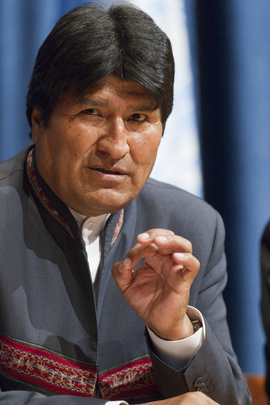 The 120-member Non-Aligned Movement (NAM), the largest single political grouping in the world body, has expressed its “deep concern over the flagrant violation of the diplomatic immunity” of a sitting head of state.

“This serious incident put at risk the life of the Head of State of a sovereign developing country and the entourage that accompanied him by forcing the official airplane that carried him to make an emergency landing in Austria,” said the NAM statement.

“The Heads of State and their airplanes enjoy full immunity in accordance with international law,” the group asserted.

On Tuesday, a delegation of ambassadors from Bolivia, Cuba, Ecuador, Nicaragua and Venezuela met with Secretary-General Ban Ki-moon to register a formal protest over the violation of diplomatic immunity. The meeting was followed by widespread speculation that the issue may surface at the Human Rights Council in Geneva, and possibly before the 193-member General Assembly in New York.

The Bolivian presidential jet was denied airspace by several European countries, including Italy, France, Spain and Portugal, while it was returning from Moscow where Morales had attended a meeting in early July.

The denial is attributed to “unfounded rumours” that the plane also carried Edward Snowden, a U.S. national and whistleblower who is in “legal limbo” in the transit lounge of the Moscow airport, after leaking details of a massive U.S. phone and Internet surveillance programme.

The administration of President Barack Obama has accused Snowden of espionage and wants him back in the United States for prosecution.

Michael Ratner, president emeritus of the New York-based Centre for Constitutional Rights, told IPS, “It’s always interesting to me how the old and remaining powerful nations such as the United States sometimes tear off their human rights mask and undermine their pious words in the efforts to ensure continuing hegemony and empire.”

He said the forcing down of the diplomatically-protected plane of President Morales is a prime example of wielding the big stick of imperialism and trying to teach a lesson to the smaller countries of the world.

“I have no doubt it was an act of aggression under the U.N. Charter and a kidnapping of the president,” said Ratner, who is president of the Berlin-based European Centre for Constitutional and Human Rights.

In the end, he said, the law embodied in the U.N. Charter and Universal Declaration of Human Rights (UDHR) is cast aside by the big powers when convenient.

“But we are in a different time,” he added. “The United States has again exposed itself as the world’s bully, as did the UK, when it threatened to extract Julian Assange (Wikileaks founder) from the Ecuador Embassy in London.”

Now, the reaction of what were once the colonies is a check on these powers, said Ratner, who is one of the U.S. attorneys for Assange and Wikileaks.

In a statement released after his meeting with Latin American envoys Tuesday, the U.N. secretary-general said he understood “the concerns which have been expressed about this unfortunate incident”.
Ban said he was relieved it did not lead to consequences for the safety of President Morales and his entourage, and it was important to prevent such incidents from occurring in the future.

Ban also said “a head of state and his or her aircraft enjoy immunity and inviolability”.

He expressed the hope that “all of the concerned governments will discuss these concerns amicably and in good faith, with full respect for all legitimate interests involved, and with a view to maintaining friendly relations among nations.”

At a summit meeting of Latin American political leaders in Bolivia last week, Morales said “apologies from a country that did not let us pass over its territory are not enough.”

“Some governments apologised, saying it was an error, but this was not an error,” the Bolivian president declared.

The incident also triggered strong denunciations by leaders from Venezuela, Ecuador, Uruguay and Argentina, among others.

Asked about the U.S. role in the denial of European airspace, State Department spokeswoman Jennifer Psaki refused to confirm or deny whether U.S. authorities had asked other countries to deny airspace to the Bolivian plane.

Ratner told IPS the laws broken by the United States and its allies that it pushed around are myriad.

President Morales’ diplomatic plane was protected and so was he as the president.

“Imagine a country forcing down Air Force One with Obama on board as the plane tried to refuel. That country would likely be obliterated,” said Ratner. “It was not only the president and his plane that were protected but so would Edward Snowden have been, had he been on the plane.”

A person seeking asylum has a right under Article 14 of the UDHR to go to a country to seek asylum from persecution. Even the United States recognises that whistle blowers are entitled to protection under the refugee convention, he added.

The U.S. actions here, and those of France, Spain and Portugal, have interfered with this important right.

“Luckily, there seems to be a tide in the world flowing over old habits of imperialism and that has the potential to limit the exploitation and power of countries that used to act with impunity,” Ratner said.

“We see it on the streets of Greece, Spain and Italy. We see it in the actions of those like Julian Assange, Wikileaks, Edward Snowden, Bradley Manning, Jeremy Hammond, Barrett Brown [all of them either whistleblowers or journalists under siege] and others who understand what is at stake: our freedom,” said Ratner.