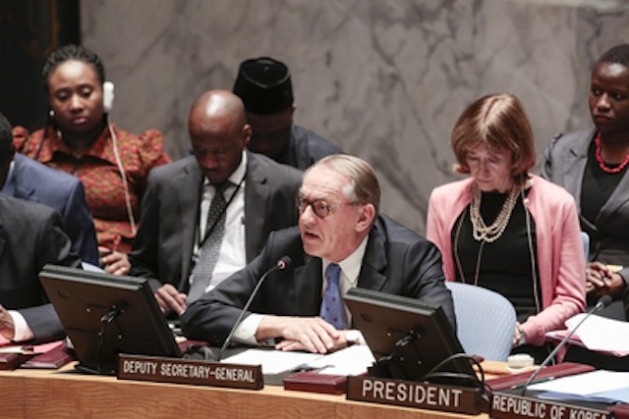 UNITED NATIONS, May 24 2014 (IPS) - The United Nations has reached a virtual dead end trying to resolve the civil war in Syria – primarily as a result of the stalemate in peace talks and the continued deadlock in the Security Council.

Last week, Lakhdar Brahimi, the joint special envoy of the United Nations and the League of Arab States, resigned after making little or no progress in talks held in Geneva between the government of President Bashar al-Assad and rebel forces.

And a divided Security Council has failed to make any headway to resolve the political problem or mitigate the growing humanitarian crisis – with four separate resolutions being vetoed by Russia and China.

In its failed attempt Thursday, the Security Council was trying to refer Syria to the International Criminal Court (ICC) in The Hague on charges of war crimes.

"Exercising the veto in a mass atrocity situation brings the Security Council into disrepute." -- Coalition of NGOs
But John Quigley, professor emeritus of international law at Ohio State University, told IPS there are issues with this proposed referral that yield some arguments to China and the Russian Federation, the two permanent members who voted in the negative.

There are considerations of practicality that impact a decision to refer the Syrian crisis to the ICC, he added.

If one holds out hope for a negotiated solution, then a referral can be counterproductive, he pointed out.

“It is difficult to say to the opposition leadership, or to the Government of Syria, that they should negotiate an end to the civil conflict in Syria, but that once an agreement is reached, the leadership on one side, or both sides, will be handcuffed and flown to the Hague for trial,” he noted.

The double vetoes cast by China and Russia – aimed primarily at protecting Syria from being hauled before the ICC for war crimes – triggered a barrage of criticism from human rights groups.

The International Federation for Human Rights (FIDH) described the two vetoes as “disgraceful” while the Global Centre for the Responsibility to Protect called the move “shameful.”

Still, Stephen Zunes, professor of politics and coordinator of Middle Eastern studies at the University of San Francisco, told IPS Thursday’s double-veto, “as reprehensible as it may be, isn’t very different than what the United States has done with far greater frequency.”

Since the creation of the United Nations, the two big powers have cast the most number of vetoes: a total of 79 by the United States and 11 by the Russian Federation (plus 90 by its predecessor, the Union of Soviet Socialist Republics or USSR), while China’s tally is nine, according to the latest available figures.

A coalition of eight non-governmental organisations including Human Rights Watch and the FIDH described the use of the veto by Russia and China as a “shameful illustration of why voluntary restraint on the use of the veto in mass atrocity situations is essential to the Council’s ability to live up to the U.N. charter’s expectations”.

“The veto has been used four times by Russia and China since the start of the Syrian conflict in 2011, preventing action that could have helped address the human rights tragedy,” it said.

“Exercising the veto in a mass atrocity situation brings the Security Council into disrepute,” the coalition added.

Zunes told IPS the joint NGO statement is in itself quite valid.

“The Russian and Chinese veto is indeed inexcusable. However, it is important to underscore the fact that it is the United States, more than any other country, which has worked to undermine the ICC.”

Not only has the United States refused to join the court, a 2002 U.S. law restricts foreign aid to any other country that does so and authorises the president to use military force to free any American or citizen of an allied country held by the ICC, he added.

On the other hand, Quigley told IPS, efforts at a negotiated solution appear remote at this point, and the allegations about war crimes violations are substantial.

“But a referral to the ICC represents a recognition of the failure of efforts at a peaceful solution,” said Quigley, author of ‘The Ruses of War: American Intervention since World War II’.

One other consideration of practicality is that the ICC would not be likely to gain custody of anyone it might indict, at least in the short term. Anyone indicted is safe from being arrested while in Syria, he said.

To this extent, Quigley said, a referral is largely symbolic, though it would impact the ability of indictees to travel into the territory of states that are parties to the Rome Statute of the ICC, and which therefore have an obligation to arrest indictees.

He also said the draft resolution fell short of a commitment to legality by exempting U.S. personnel from the jurisdiction of the ICC, should they be involved in any way in the territory of Syria.

“This exemption was not necessary from a practical standpoint since there is no great likelihood of U.S. personnel being involved on the ground in Syria.”

But if the ICC is to investigate a situation, said Quigley, it should have the ability to indict any and all persons.

The draft resolution failed to call on states not parties to the Rome Statute to cooperate with the ICC by arresting anyone who might be indicted, he declared.

Neither Syria nor the United States are state parties to the Rome Statute that created the ICC.

Meanwhile, in a report released last week, Secretary-General Ban Ki-moon said more than 150,000 people have been killed in the Syrian civil war, now in its fourth year, while three million people have been reduced to the status of refugees, inside and outside the country.