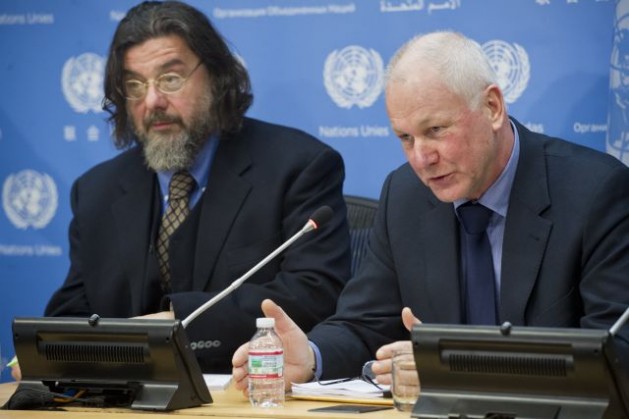 Ǻke Sellström (right), head of the UN technical mission to investigate the possible use of chemical weapons in Syria, briefs journalists on the work of the mission on Dec. 13, 2013. At his side is investigation team leader Maurizio Barbeschi from the World Health Organisation (WHO). Credit: UN Photo/Amanda Voisard

WASHINGTON, May 6 2014 (IPS) - The head of the U.N. team that investigated the Aug. 21, 2013 Sarin attack in the Damascus suburbs, Ake Sellstrom, is doubtful about the number of victims of the attack reported immediately after the event.

Sellstrom has suggested that many people who claimed to have been seriously affected by Sarin merely imagined that they had suffered significant exposure to the chemical.

Underlying Sellstrom’s doubts are data on symptoms from a sample of people who said they were severely affected by the Sarin attack. The data, published in the September report, appear to belie the claims of Sarin intoxication by those in the sample, according to experts who have analysed them.

Sellstrom expressed his doubts in an interview with Gwyn Winfield, the editor of the CBRNe World Magazine, that was published in the February issue.

“If you take the figures from Tokyo, you can compare how many died versus those that were intoxicated,” said Sellstrom. But in the case of Syrian attack, he said, “[W]hile we could conclude that it was big, we couldn’t do the same for how many died or were affected.”

He expressed doubt that many of the alleged survivors of the attack had been exposed to Sarin. “You can get many symptoms from other items in a war,” Sellstrom said, “[P]hosphorous smoke, tear gas, many of those devices on the battlefield will affect the lungs, eyes and give you respiratory problems.”

Then Sellstrom added, “Also in any theater of war, people will claim they are intoxicated. We saw it in Palestine, Afghanistan and everywhere else.”

Now a project manager at the European CBRNE Centre in Umea, Sellstrom did not respond to e-mail requests from IPS for comment on this article by deadline.

However, his remarks to CBRNe were evidently influenced strongly by the team’s experience in gathering data on several dozen alleged victims who claimed to have been among the most heavily exposed to Sarin on Aug. 21.

Sellstrom explained to Winfield that the investigating team had sought the help of the opposition in the area where the attack took place to identify as many as 80 survivors of the Sarin attack.

“We thought that if they can gather 80 people who were affected but still surviving, that it [would be] clearly indicative that a major event had taken place,” he said.

Sellstrom revealed in the interview that the team had chosen 36 people from the original 80 identified as survivors by the opposition. Those 36 people described themselves as having had very serious exposure to Sarin.

Thirty of the 36 reported rocket strikes either on or near their homes. The remaining six said they had gone to a point of impact to help those suffering from the attack.

The U.N. report provided detailed statistics on the symptoms reported by the 36 individuals and concluded the data were “consistent with organophosphate intoxication”. But chemical weapons specialists have identified serious contradictions in the data that appear to indicate the contrary.

Twenty-eight of the 36 victims – nearly four-fifths of the sample – said they had experienced loss of consciousness, according to the Sep. 16 U.N. report. The second most frequent symptom was difficulty breathing, which was reported by 22 of the 36, followed by blurred vision, which was suffered by 15 of them. But only five of the 36 reported miosis, or constricted pupils.

That fact is an indication that the exposure to Sarin was actually minimal or nonexistent for 31 of the 36, or 86 percent of the sample. Miosis is the most basic and reliable indicator of nerve gas poisoning, according to chemical weapons literature and specialists who analysed the report.

Yet miosis was the least prevalent symptom among those people claiming to have been very seriously exposed to Sarin in Syria.

Dr. Abbas Faroutan, an Iranian physician who treated Iranian victims of Iraqi nerve gas attacks, noted that the data were “not logical”.

Seven of the 36 people identified as victims told investigators they had lost a combined total of 39 members of their immediate families who were killed in buildings they said were either points of impact of the rockets or only 20 metres (64 feet) away. However, only one of the seven exhibited the constriction of pupils and only one reported nausea and vomiting.

That seeming contradiction is explained by the fact that even exposure to an amount of Sarin too small to cause any symptoms would be detected in the blood using an extremely sensitive method called fluoride reactivation, according to Kaszeta.

Kaszeta said he had concluded that the people interviewed and evaluated by the UN “didn’t have serious exposure” to nerve gas.

The indication that the overwhelming majority in the sample had very little or no exposure to Sarin was particularly significant, because those in the sample had been chosen by local opposition authorities as being among the most serious affected survivors. The data suggest that the Syrian opposition and its external supporters had vastly exaggerated the scope and severity of the attack.

In an apparent reference to the questionable data on symptoms collected on the 36 alleged survivors, Sellstrom told Winfield the investigators “need to be better at differential diagnostics on the intoxication, better medical markers.”

“[T]he figures they provided of people who passed through them was just not possible,” said Sellstrom. “It is impossible that they could have turned over the amount of people they claim they did.”

Sellstrom did not refer to the total number of victims claimed by hospital administrators, but Médecins Sans Frontières (MSF) issued a statement Aug. 24 that three hospitals near the area of the attack had reported to MSF that they “received approximately 3,600 patients displaying neurotoxic symptoms in less than three hours on the morning of Wednesday, August 21, 2013”. MSF said 355 had died.

Sellstrom repeated his doubts about the total number of victims of Sarin intoxication and the numbers of patients said to have been treated in hospitals in a Mar. 11 interview with the website “Syria in Crisis” affiliated with the Carnegie Endowment for International Peace.

The head of the Syria investigation had also investigated the use of chemical weapons by Iraq during the Iran-Iraq war for the U.N.  He had been Chief Inspector for UNSCOM, the U.N. Commission on Iraq’s compliance with the ban on weapons of mass destruction, and head of its successor, UNMOVIC.

He has apparently questioned the larger narrative of Syrian government culpability for the attack as well. In an interview with the Wall Street Journal after the release of the December U.N. investigation report, Sellstrom said he believes both sides in the Syrian conflict had the “opportunity” and the “capability” to “carry out chemical weapons attacks.”