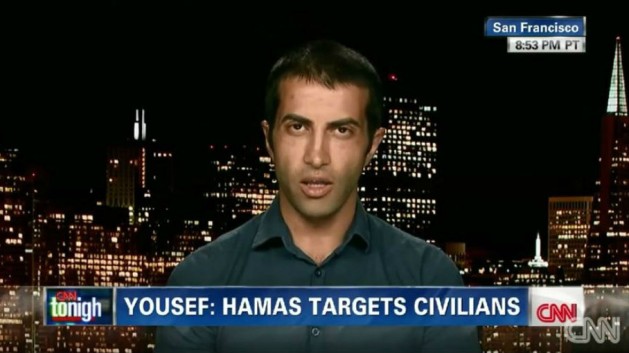 In the past few years, Mosab has become something of a minor celebrity on right-wing and fundamentalist Christian talk shows. His message varies, but his target is often Islam in general.

WASHINGTON, Sep 15 2014 (IPS) - The son of one of the founders of the biggest Palestinian militant group decides to work with Israel. He spends a decade working undercover with the Israeli security service, the Shin Bet, thwarting dozens of Palestinian attacks and contributing significantly to the arrest or elimination of dozens of leading Palestinian militants.

This sounds like the makings of a Hollywood big budget spy thriller. In fact, it is the plot of a documentary, “The Green Prince,” based on the autobiography of Mosab Hassan Yousef.

"As long as Hamas is digging tunnels and promoting extremism, I don’t see how anyone can co-exist with this type of danger.” -- Mosab Hassan Yousef

Yousef and his handler in the Shin Bet, Gonen Ben Yitzhak, narrate the film, which somewhat frenetically throws together surveillance footage and live interviews. Although the film tries to focus on the growing bond between Ben Yitzhak, “The Handler”, and Yousef, “The Asset,” there is an underlying tension in the film that is only partially due to the sense of overwhelming danger that Yousef faced on a daily basis.

The most obvious question that is raised by the film is “how does the son of Hassan Yousef, who helped found Hamas and is one of its most prominent leaders to this day, become a spy for Israel?”

The film itself offers only a very succinct answer to this question. As a youth, Mosab was arrested by Israel and was tortured in his interrogation, which was also when he was identified as a potential mole.

He was then sent to prison, where he witnessed far worse torture by Hamas activists, including murder, against fellow Palestinians they suspected might be Israeli agents. This, he said, convinced him to take up the Shin Bet’s offer to work for them.

Indeed, it seems that Mosab’s disillusionment with the Palestinian leadership runs much deeper than just antipathy toward Hamas. In the film, Hamas is the focus, but in the wake of Israel’s recent devastation of the Gaza Strip, the absence of the difficulties of occupation in the film is even more keenly felt. Yet Mosab very much holds to the Israeli view of recent events.

“Palestinians can continue to export their internal problems and blame Israel, but at the end of the day, they have bigger problems than occupation,” he told IPS. “There is corruption, greed, and mismanagement; those are actual enemies of Palestinian people.

“If they can come to a higher conscience where they can see violence is not the way, but negotiations and co-existence is the higher path to achieve their freedom, then the international community will trust them and build bridges. But as long as Hamas is digging tunnels and promoting extremism, I don’t see how anyone can co-exist with this type of danger.”

In fact, in the past few years, Mosab has become something of a minor celebrity on right-wing and fundamentalist Christian talk shows. His message varies, but his target is often Islam in general.

In 2010, on the Canadian news show, Power and Politics, Mosab told a shocked host that “The problem is much bigger than Hamas, the problem is in the God of Islam…he is a god of torture, he is the deceit god, this is what he talks (sic) about himself.”

This echoes the views he has espoused several times as a guest on the far-right wing Sean Hannity show.

When talking with Pat Robertson on his Christian Broadcasting Network in 2010, which caters to the most extreme of Christians in the United States, Mosab continually spoke of his love of Jesus and how Jesus was the only true path to peace.

This would displease many Jews who have come to adore him, not only for his story but for stances like the one the Israeli newspaper Ha’aretz reported him telling an orthodox Jewish crowd in 2011.

All of this raises some real questions about Mosab’s motivations, and indeed how sincere the story we saw in the film was. “The Green Prince“ shows a man who made a difficult choice but believed he was doing it to save lives. The film does note that Mosab converted to Christianity, but gives no hint of his deep antipathy toward Islam.

What we do see in the film, quite clearly, is the growing bond between Mosab and his Shin Bet handler, Gonen Ben-Yitzhak.

Ben-Yitzhak, now a lawyer in Israel after losing his job with the Shin Bet, echoes Yousef’s view that the Palestinians are to blame for the perpetuation of the conflict, although Ben-Yitzhak has a somewhat less idealized view of Israel.

“Look, I’m not pleased with all Israeli policies,” Ben-Yitzhak told IPS. “But now, Palestinians need to find a way to develop. But for many years, they are stuck with bombing and terrorism and violence. Many (people around the world) criticize Israel, but can you compare occupation to blowing up people on a bus? What is the comparison, what are the values that make him blow himself up?

“I’m sure he doesn’t share any values with you… My grandparents, although they suffered and left family in Europe, took responsibility to build a new future, rather than wait for an outside power, a miracle to change their lives. The biggest problem the Palestinians have is that they don’t take responsibility for their own lives, waiting [instead] for the outside world to do something.”

Clearly, Mosab and Gonen built a strong and devoted bond. They both believe that their friendship can be a model for co-existence between Israelis and Palestinians.

“I don’t see a big difference between Israelis and Palestinians,” Gonen told IPS. “When I worked with Shin Bet, I was working with people. I didn’t see a Palestinian as anything but a human being. If we all look at each other as human beings, not as Israelis, Palestinians, occupier and occupied, we can solve these problems.” Mosab put forth a similar sentiment.

Yet it seems that this coming together only happened because Mosab fully came over to the Israeli worldview, and a somewhat extreme one at that. This accounts for some of the discomfort in the film, where one has the feeling that there is a lot that is being omitted. Mosab’s and Gonen’s relationship seems more like a blueprint for surrender than for co-existence.