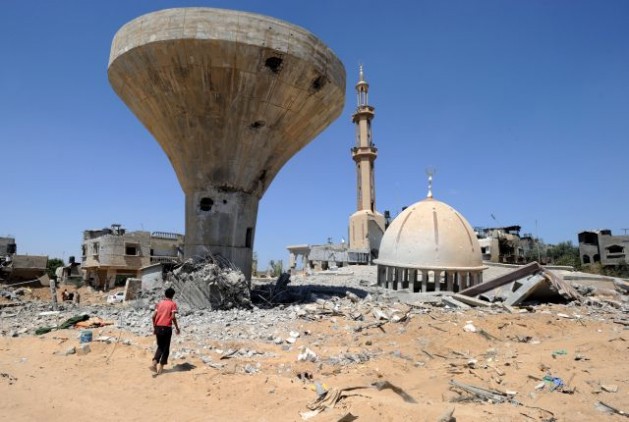 A view of the remains of structures hit by Israeli strikes in the Gaza Strip, Aug. 6, 2014. Credit: UN Photo/Shareef Sarhan

UNITED NATIONS, Aug 22 2014 (IPS) - Secretary-General Ban Ki-moon, in a rare moment of political candour, lashed out at Israel last week, questioning its “respect for the principles of distinction and proportionality” – particularly in the context of the civilian death toll that kept rising to over 2,000 Palestinians, with more than 75 percent civilians.

“I expect accountability for the innocent lives lost and the damage incurred,” he warned.

"The impunity of Israel and the United States are a license for every country to violate humanitarian and human rights laws that are fundamental to civilisation." -- Michael Ratner of CCR

That “accountability” has to come only before the International Criminal Court (ICC) in The Hague where both Israelis and Hamas militants are liable for war crimes – even though only two civilians died in the Hamas rocket attacks against Israel. But the chances of either one of the warring parties going before the ICC are remote.

Asked about a possible ICC intervention, John Quigley, professor emeritus at Ohio State University, told IPS one should not be asking whether Israel can be brought before the ICC.

“The ICC does nothing against states. It prosecutes individuals. So the question is whether Israelis could be brought before the ICC,” he noted.

One way is a Security Council resolution, said Quigley, author of ‘The Statehood of Palestine: International Law in the Middle East Conflict.’

But according to most U.N. diplomats, any such resolution will be vetoed either by one, or all three Western nations – the United States, Britain and France – who traditionally throw their protective arm around Israel, right or wrong.

Quigley said, “If a state is a party to the Rome Statute, then its nationals can be prosecuted in the ICC.”

Israel is not a party to the Rome Statute that created the ICC.

“However, the ICC has jurisdiction based on the territory where a crime is committed. So if an Israeli commits a crime in a state that is a party, the ICC can prosecute that Israeli,” said Quigley, author of ‘Genocide in Cambodia and The Ruses for the War.’

Beyond that, said Quigley, if a state is not a party but files a declaration conferring jurisdiction on crimes within its territory, then anyone who commits a crime in the territory of that state may be prosecuted.

That is the basis on which the ICC has jurisdiction over Israelis who commit crimes in the territory of Palestine, because Palestine filed such a declaration in 2009, he added.

The obstacle is that the ICC prosecutor, Fatou Bensouda, says the Palestine declaration was not valid because Palestine was not a state in 2009.

Michael Ratner, president emeritus of the New York-based Centre for Constitutional Rights, told IPS there is a desperate need to hold Israel, its leadership and military officials accountable for the international crimes Israel is committing today in Gaza, and for the crimes it has committed in the past in Gaza, the West Bank and Israel itself.

“Along with Israeli officials, the aiders of abettors of this ongoing criminal conduct should be in the dock as well,” Ratner said.

This, he said, would include especially officials of the U.S. and other countries who, knowing that Israel is committing war crimes and crimes against humanity, continue to give it the means for doing so, said Ratner, president of the Berlin-based European Centre for Constitutional and Human Rights.

A story in the London Guardian last week said the ICC was under Western pressure not to open a Gaza war crimes case.

Julian Borger, the Guardian’s diplomatic editor, wrote that in recent days, a potential ICC investigation into the actions of both the Israel Defence Forces (IDF) and Hamas in Gaza has become a fraught political battlefield and a key negotiating issue at ceasefire talks in Cairo.

“But the question of whether the ICC could or should mount an investigation has also divided the Hague-based court itself,” he wrote.

An ICC investigation could have a far-reaching impact, he said, pointing out it would not just examine alleged war crimes by the Israeli military, Hamas and other Islamist militants, but also address the issue of Israeli settlements in the Palestinian territories, for which the Israeli leadership would be responsible.

In an exchange of letters in the last few days, Bolger wrote, lawyers for the Palestinians have insisted that Bensouda has all the legal authority she needs to launch an investigation, based on a Palestinian request in 2009. “However, Bensouda is insisting on a new Palestinian declaration, which would require achieving elusive consensus among political factions such as Hamas, who would face scrutiny themselves alongside the Israeli government.”

“While she also referred Hamas for indiscriminate firing of rockets, that violation pales compared to the massacre Israel has carried out,” Ratner added.

Her condemnation also was aimed at the United States for providing the weaponry Israel is employing in its assault on Gaza.

“The High Commissioner is right: Israel is deliberately violating the laws of war and has boasted of it,” he said.

After the second war in Lebanon in 2006 in which Israel flattened the Dahiya civilian neighbourhood of Beirut, an Israeli general said Israel will use disproportionate force against any village that fires upon Israel, “causing great damage and destruction.”

Ratner said by failing to hold Israel accountable in large part because it is protected by the United States, it is making a mockery of the Geneva Conventions and international law.

“The impunity of Israel and the United States are a license for every country to violate humanitarian and human rights laws that are fundamental to civilisation,” he said.

Ratner argued that the United Sates is too powerful and the chances of an ICC investigation, much less a prosecution, are remote. Even were the court by some miracle to launch an investigation, it would never, because of U.S. pressure, result in a prosecution. But this does not mean Palestinians and their allies should stop trying, said Ratner.

“Every means to expose and hold Israel accountable and demonstrate the bias of our international system is important,” he added. “The effort is clearly terrifying Israel because Israel knows the criminality it is engaged in.”

So, if the ICC is not really a means to hold Israel and the U.S. accountable, then efforts should be doubled to hold Israeli and U.S. officials accountable through universal jurisdiction in every national court of every state, he noted.

Many countries have jurisdiction over war crimes and crimes against humanity no matter where committed and even if the perpetrator is not in the country.

“The goal is to make Israel the pariah state it ought to be for committing these crimes, to make its officials unable to move outside the country and to ultimately send a message: Enough! It is saddening at this moment to see horrendous crimes committed hourly and watch the governments of many states stand by or enable,” he added.

“Our hope to hold Israel accountable should be in the outpouring of opposition to these crimes by citizens throughout the world. Ultimately, the courts will need to act,” declared Ratner.