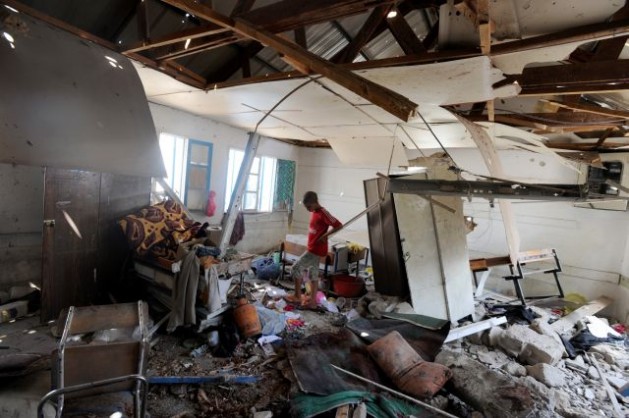 A Palestinian student inspects the damage at a U.N. school at the Jabalia refugee camp in the northern Gaza Strip after the area was hit by Israeli shelling on Jul. 30, 2014. At least 16 civilians, including several children, were reportedly killed and more than 100 people were injured. Credit: UN Photo/Shareef Sarhan

UNITED NATIONS, Aug 4 2014 (IPS) - When world political leaders met at the United Nations back in 2005, they unanimously adopted a resolution affirming the principle of “Responsibility to Protect” (R2P), aimed primarily at safeguarding innocent civilians from war crimes, genocide, mass atrocities and ethnic cleansing.

Since 2006, the 15-member U.N. Security Council (UNSC), the only international body empowered to declare war and peace, has reaffirmed this principle in several military conflicts, including Sudan, Yemen, Mali, Libya, South Sudan, Cote d’Ivoire and the Central African Republic – and in some instances even authorised military intervention.

The U.N. Security Council has only issued a "presidential statement" - far removed from a legally binding resolution either condemning the civilian killings or insisting on both warring parties to end the conflict.

But despite the killings of over 1,800 Palestinians, mostly civilians, in the current conflict in Gaza, the UNSC has remained tight-lipped – and in hiding.

Simon Adams, executive director of the Global Centre for the Responsibility to Protect at the Ralph Bunche Institute for International Studies, told IPS the United States often speaks of its “special relationship” with Israel “but it has a special responsibility to ensure there is accountability for alleged war crimes.”

He said Samantha Power, U.S. ambassador to the United Nations, “has done so much to advance the cause of mass atrocity prevention, but she should lead the Security Council in ensuring that civilians in Gaza get the protection they are entitled to under international law.

“The Israeli government appears to have declared war on U.N. schools and shelters that are housing displaced civilians. Deliberately bombing such places is a war crime,” said Adams.

The UNSC, he said, “must ensure that there is accountability and uphold its responsibility to protect.”

But so far the Council has only issued a “presidential statement” – far removed from a legally binding resolution either condemning the civilian killings or insisting on both warring parties to end the conflict.

According to figures released by the Gaza Ministry of Health, nearly 1,810 Palestinians, mostly civilians, have been killed in the three-week old conflict while the Israeli death toll is 64 soldiers and three civilians.

The Israelis have been accused of bombing six U.N. shelters, including three U.N. schools, where Palestinians have sought safe haven.

Israel has argued these bombings were a reaction to the Palestinian military group Hamas firing rockets from nearby schools.

Secretary-General Ban Ki-moon, who has remained cautious in his comments so far, blasted the last attack on a U.N. school as “a moral outrage and a criminal act.”

“Nothing is more shameful than attacking sleeping children,” he said.

The U.S. State Department was equally critical of the attack on schools.

State Department Spokeswoman Jen Psaki said “the suspicion that militants are operating nearby does not justify strikes that put at risk the lives of so many innocent civilians.”

Adams told IPS the responsibility to protect applies everywhere and at all times.

“A stateless Palestinian child has as much right to protection from war crimes as an Israeli citizen of Tel Aviv or Jerusalem,” he said.

In an op-ed piece last week, Adams said the distinction between military and civilian targets is central to international humanitarian law and must be adhered to, regardless of where a conflict is occurring, or whom it is occurring between.

With ongoing rocket attacks on Israel and unrelenting retaliatory airstrikes in densely populated parts of Gaza, both Hamas and the Israeli government appeared to be potentially violating the fundamental laws of war, he noted.

Navi Pillay, U.N. high commissioner for human rights, said, “If civilians cannot take refuge in U.N. schools, where can they be safe?”

“They leave their homes to seek safety – and are then subjected to attack in the places they flee to. This is a grotesque situation.”

In a statement released Monday, the spokesman for the secretary-general said Sunday’s attack is yet another gross violation of international humanitarian law, which clearly requires protection by both parties of Palestinian civilians, U.N. staff and U.N. premises, among other civilian facilities.

United Nations shelters must be safe zones not combat zones, he said.

The Israel Defence Forces (IDF) have been repeatedly informed of the location of these sites.

“This attack, along with other breaches of international law, must be swiftly investigated and those responsible held accountable. It is a moral outrage and a criminal act,” the spokesman said.

The spokesman also said the secretary-general is profoundly dismayed over the appalling escalation of violence and loss of hundreds of Palestinian civilian lives since the breach of the humanitarian ceasefire on Aug. 1.

The resurgence in fighting has only exacerbated the man-made humanitarian and health crisis wreaking havoc in Gaza. Restoring calm can be achieved through resumption of the ceasefire and negotiations by the parties in Cairo to address the underlying issues, he added.