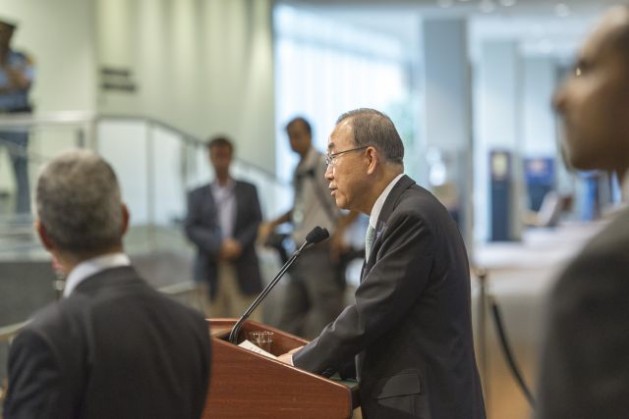 Secretary-General Ban Ki-moon speaks to journalists on the hostilities in Gaza Jul. 28, reiterating his call for an immediate, unconditional humanitarian ceasefire in the conflict. Credit: UN Photo/Mark Garten

UNITED NATIONS, Jul 29 2014 (IPS) - As the death toll in Gaza keeps climbing – and charges of alleged war crimes against Israel keep mounting – the most powerful political body at the United Nations remains ineffective, impotent and in a state of near paralysis.

The 15-member U.N. Security Council (UNSC), the only body representing the international community armed with legally-binding powers, has failed to adopt a single resolution on the three-week- old conflict in Gaza which continues to result in the merciless killings of Palestinians and widespread destruction of homes and schools.

After an unusual midnight meeting, ostensibly meant to display a false sense of urgency, the UNSC agreed Monday to release a so-called presidential statement, dismissed by some diplomats here as a morbid joke.

“Nobody, least of all the warring parties, takes these UNSC statements seriously,” said an Asian diplomat.

A mildly worded draft resolution, co-sponsored by Jordan and the Arab states, has been in circulation for weeks now, but failed to garner enough support to reach the negotiating table.

Mouin Rabbani, co-editor of Jadaliyya, an e-zine produced by the Arab Studies Institute, told IPS that from the outset of the latest assault on the Gaza Strip, Israeli leaders have been clear that their ability to sustain their attacks is dependent on international support.

“It’s what they call ‘the ticking of the diplomatic clock’, meaning the slaughter can continue with impunity only so long as the West remains prepared to extend it political cover,” he said.

The refusal of the UNSC to send a clear message to Israel that the slaughter must stop and there will be consequences if it doesn’t, therefore in practice extends the grace period allotted to Israel to continue its massive bombardments of the Gaza Strip, said Rabbani, who is also a contributing editor to the Washington-based Middle East Report.

This, of course, primarily reflects the support of permanent members U.S., UK and France – but also other members – for Israel’s actions, he said.

All three Western nations in the UNSC have predictably remained supportive of Israel and would not approve any resolutions either accusing Israel of war crimes, imposing a no-fly zone over Gaza or calling for an international commission of inquiry into civilian killings.

Navi Pillay, the U.N. High Commissioner for Human Rights, has warned that Israel’s continued military assault on Gaza may amount to war crimes, while criticising Hamas for “indiscriminate attacks”.

“There seems to be a strong possibility that international law has been violated, in a manner that could amount to war crimes,” Pillay said last week.

The 47-member Human Rights Council last week voted for an international inquiry into alleged war crimes in the Gaza conflict. But Israel has refused to cooperate in implementing the resolution which was opposed by a single country: the United States.

Abba A. Solomon, author of ‘The Speech, and Its Context: Jacob Blaustein’s Speech: The Meaning of Palestine Partition to American Jews’, told IPS, “The United States will not act against Israel in the Security Council because of the well-established leverage of the pro-Israel lobby, both in the U.S. Congress and Senate.”

He said the administration of President Barack Obama is working in a situation in which the U.S. House and Senate passed unanimous resolutions of full support for Israeli military action against Gaza earlier in July.

Since the 1940s, he pointed out, American Jewish organisations have cultivated relationships with elected officials, in the process of seeking and giving political and financial support.

“These organisations have accepted that advocacy for Israeli positions is part of their duties,” Solomon said.

In times of crisis, these relationships are golden for the Israeli government, he added.

In this case, customary U.S. deferral to Israel obstructs what would be humanitarian action, a UNSC resolution to protect a besieged civilian population, said Solomon.

Historically, he noted, U.S. assent to U.N. condemnations of offensive Israeli military actions has been argued against because it would “embolden” whatever Arab opponent Israel is contesting with.

In cases where condemnation is unavoidable, “pairing” with condemnation of Arab actions is insisted upon, said Solomon,
who has done years of archival research on the ways that American Zionism has gained and maintained so much power since the 1940s.

Rabbani told IPS at a time when Israeli leaders are explicitly stating their objective is to inflict such massive damage upon the Gaza Strip that the population will turn against Hamas – and killing civilian non-combatants by the bucketful in what can only be characterised as a pre-meditated and deliberate targeting of civilians and civilian infrastructure – these states prioritise Israel’s purported right to self-defence above all else.

“To speak of an Israeli right to self-defence under such circumstances, when over 1,000 Palestinian civilian non-combatants have been killed in what can only be characterised as a pre-meditated and deliberate act of mass murder, and when the vast majority of Israeli casualties have been uniformed combatants, is well beyond obscene,” he said.

“It constitutes active support, and therefore direct complicity, in Israeli war crimes – even without taking into consideration the manifold other direct and indirect ways such states are supporting Israel.”

These include massive military, economic and political support, giving settlement products preferential access to their markets, and permitting their citizens to commit war crimes in Israeli uniform, he added.

Rabbani said the role of the UNSC is to preserve and protect international peace and security, and it has once again failed miserably in this task.

And it has done so once again on the question of Palestine, a conflict for whose creation and resolution the U.N. bears a unique responsibility, he added.

“Indeed, this demonstrates once more the incapacity of the UNSC to serve as a meaningful guardian of international peace and security in its current form,” Rabbani said.

Solomon told IPS the U.S. administration has the imperative to avoid accusations in the Senate and House that it has “betrayed” the “most important strategic ally in the Mideast” – Israel.

He said direct Israeli connections with U.S. political figures across the party divide require care in any State Department response to Israeli bombardments of Gaza civilians.

And Republican and Democratic aspiring politicians are taken on Israeli “fact-finding” tours.

He pointed out Palestinian advocacy organisations have not established anything like this degree of ongoing cooperation in the U.S. political scene.

U.S. cooperation with a binding U.N. attempt to rein in Israeli military action would mean a challenge to a long-established system of beneficial relationships in the American political scene, Solomon declared.