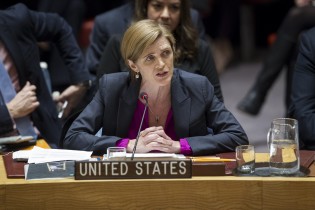 By Thalif Deen
As the death toll in Gaza keeps climbing - and charges of alleged war crimes against Israel keep mounting - the most powerful political body at the United Nations remains ineffective, impotent and in a state of near paralysis.

By AJ Correspondents
The British government has published internal legal advice which it said showed it was legally entitled to take military action against Syria, even if the United Nations Security Council blocked such action.

By Thalif Deen
After 20 long years of negotiations on a proposed expansion of the Security Council, African countries continue to be left out in the cold - even as African leaders complain that the international community has failed to respond to their demands for two permanent seats in the most powerful body at the United Nations.

By Thalif Deen
Just before the Western-inspired resolution against Syria was vetoed in the U.N. Security Council (UNSC) last week, Russian Foreign Minister Sergey Lavrov was quoted as saying the United Nations was trying to support a revolutionary movement inside the country - which happens to have strong political, economic and military links to Moscow.

By Thalif Deen
Syria became the first country in the history of the United Nations to be "protected" for an unprecedented third time by double vetoes cast by Russia and China in the Security Council.

By Jim Lobe
While reports of two mass killings in Syria by pro-regime forces in the past week have increased pressure on President Barack Obama to intervene more directly in support of the opposition, his administration appears determined to avoid any military involvement.

By Haider Rizvi
The United States and its Western allies appear increasingly inclined to push for regime change in Syria, although the latest round of diplomatic talks at the U.N. Security Council Wednesday suggest that it remains a distant possibility.

By AJ Correspondents
Kofi Annan, the U.N.-Arab League envoy to Syria, has called on the country's government to take bold steps to prove its commitment to restoring peace during a visit to Damascus.

By Thalif Deen
At the height of the Cold War, a Peruvian diplomat, Dr. Victor Andres Belaunde, publicly expressed scepticism about the ability of small countries to survive the diplomatic might of the big powers in the world body.
Next Page »
ADVERTISEMENT ADVERTISEMENT