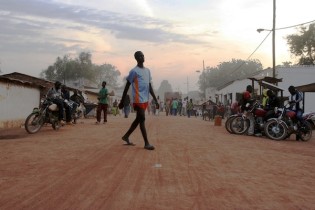 By Edith Drouin-Rousseau
A canoe trip brought together 200 indigenous and non-indigenous paddlers on the Hudson River for a hundred mile trip on Aug 9, the International Day of the World’s Indigenous Peoples. The commemoration honoured the first treaty between the Dutch immigrants and the Haudenosaunee people 400 years ago, the Two Row Wampum.

By Edith Drouin-Rousseau
“Will they come to life, or are they only going to be destined to live on paper?” asked U.S. Secretary of State John Kerry during a meeting of the U.N. Security Council last week. He was referring to  resolution 2098 on Peace, Security and Cooperation (PSC) relating to the multi-level Peace framework adopted by the U.N. in March 2013.

Journalism: A Profession Worth Dying For?

By Edith Drouin-Rousseau
Seventy-two journalists were killed in 2012, an increase of 49 percent since 2011, according to the Committee to Protect Journalists (CPJ).

By Edith Drouin-Rousseau
The use of technology to fight gender-related violence is encapsulated in the “four Ps”: prevention, protection, prosecution and provision of multi-sector services, according to Lakshmi Puri, assistant secretary-general of the United Nations and acting head of U.N. Women.

By Edith Drouin-Rousseau
“Cooperative enterprises remain strong in time of crisis." This was the mantra heard echoing around the world on Jul. 6, the International Day of Cooperatives.
ADVERTISEMENT ADVERTISEMENT