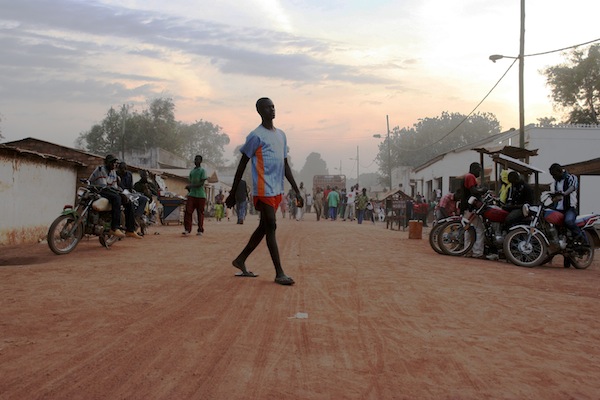 The armed group Séléka recently reinforced its position in the northern provinces of the Central African Republic, notably in the northwest city of Paoua. Credit: Simon Davis/UK DFID/CC by 2.0

UNITED NATIONS, Aug 19 2013 (IPS) - As Michel Djotodia took his oath as the new president of the Central African Republic (CAR) on Aug. 18, Séléka, the coalition of rebel groups that he led and that helped him overthrow the government on Mar. 23, were still looting and killing civilians.

Already among the poorest nations in the world, this landlocked Central African country has seen its humanitarian crisis intensify over the last month as attacks by the Séléka multiplied in areas outside Bangui, CAR’s capital.

Order was partially restored in the capital as the international community convinced Djotodia to back down and change his title to interim president as well as establish a transitional council to hold elections in the next 18 months.

Uncontrolled elements of the rebel coalition consequently retreated to provinces to continue “business as usual”. The outcome was an unprecedented peak in violence against civilians, particularly in the north.

Communities have started to take up guns against armed groups, provoking even worse retributions and reprisals. Internal division within the Séléka also contributed to the exacerbation of the crisis, with several clashes taking place.

"The Central African Republic is not yet a failed state but has the potential to become one if swift action is not taken."
-- Valerie Amos

As the crisis was brought to the attention of the United Nations Security Council on Jul. 14, Valerie Amos, under-secretary-general for humanitarian affairs, warned, “The Central African Republic is not yet a failed state but has the potential to become one if swift action is not taken.”

Non-governmental organisations and U.N. agencies were forced to reduce their staff in the interior of the country when the clashes started and they, along with the civilian population, were targeted by the Séléka.

“Our offices have been looted and pillaged to a point where we have to start from zero, and [it] takes us a long time to mobilise the resources to do that,” Amy Martin, head of office for the United Nations Office for the Coordination of Humanitarian Affairs (OCHA), told IPS.

A population living in fear

Outside Bangui, rebels are acting with total impunity as the rule of law has disappeared along with the government officials. Courts and offices are being violently pillaged, and police officers hide in civilian clothes for fear of being targeted by the Séléka.

A number of villages have become ghost towns since rebels passed through, with schools, hospitals and houses deserted. The few who remain hide in the bushes, living in unsanitary conditions and vulnerable to diseases such as malaria.

Rising tensions in the north have displaced 4,000 people along the Chadian border, and 206,000 Central Africans have been displaced since the beginning of the conflict.

According to OCHA’s most recent report, 1.6 million out of CAR’s 5.1 million inhabitants are now categorised as “vulnerable”.

Many aid organisations have retreated to the safety of Bangui, although some NGOs such as Médecins Sans Frontières (MSF) and the Red Cross, never left the provinces and instead reduced staff when insecurity was peaking. Now they are rehabilitating their installations and sending new workers into the field.

As of Aug. 10, U.N. workers also began to be redeployed in all parts of the country. Full capacity will be reached, however, only when funding is sufficient and the entire state is secure.

A conflict that does not “sell” well

Funding has always been a problem in CAR, even before the Mar. 23 coup. Being a former French colony, the country is still perceived as being a “French problem”, Lewis Mudge, a researcher with Human Rights Watch (HRW), told IPS.

In addition to CAR’s low international profile, several foreign donors have withdrawn aid to the country, fearing that their money would end up in the wrong hands. The losses have been concentrated in the area of development aid, a domain deemed less “urgent” than humanitarian aid.

“At the moment we reach a very high intensity in terms of human rights violations, [but] we have no means to support ourselves,” said Joseph Bindoumi, president of the Central African League for the Defence of Human Rights (LCDH), which was affected by the cuts, in an interview with IPS.

CAR’s traditional humanitarian donors, however, did not remove or reduce their aid, Martin told IPS. Rather, their donations stagnated as demand increased.

Of the 195 million U.S. dollars needed to cope with the crisis, an unevenly distributed 32 percent of funding has been raised. Emergency shelter and early recovery did not receive a single penny, while water, sanitation and hygiene received only eight percent of the amount required.

Security: The first step towards recovery

“The most pressing issue remains security,” Bindoumi stressed to IPS, deploring that insecurity prevents his organisation from providing a sufficient humanitarian response outside Bangui.

Securing the country was a task left to the African Union until Jul. 19, when the international community decided to upgrade the peacekeeping force to the African-Led International Support Mission in CAR (AFISM-CAR). A total of 3,600 units will be dispatched, of which one third will act as civilian police and two thirds as military.

Still, “3,600 is not nearly enough,” Mudge told IPS. With about 20,000 of Séléka’s fighters scattered around the country, the U.N. troops will need to be strategically organised and have a strong mandate to succeed. Otherwise, it will be a never ending “cat and mouse game”.

Yet CAR cannot expect much more, Mudge added, allowing that “a small amount of peacekeepers can still make a difference”. With only 60 peacekeepers from the Democratic Republic of Congo, for example, the northern town of Kaga-Bondoro has shown significantly more stability than neighbouring towns.