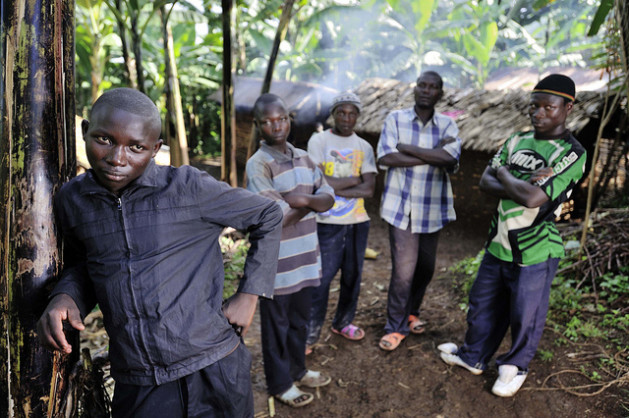 BANGUI, Apr 10 2013 - At 13 years, Youssouf embodies all the ills that have plagued the Central African Republic in recent years. On Mar. 24, he helped capture Bangui, the capital, as he fought in the ranks of the Séléka rebel coalition.

“Only yesterday, I was old enough to fight and kill. Yet today I have to wait until I’m 18 to join the army?” Under the shade of the mango tree in the Bangui army base, where he is being kept secretly with three other child soldiers, Youssouf fumes. He feels betrayed by the Séléka rebels who marched onto the capital to instate their leader, Michel Djotodia.

The rebels now need international credibility and know that the presence of child soldiers in their ranks tarnishes their image. The question came into sharp focus after the South African troops who were defending the presidential palace and its occupant, ousted President Francois Bozizé, reported being traumatised to find that the rebels they had fought and killed were mostly “kids”.

To keep them out of sight, Séléka has placed many child soldiers with families from northern CAR, where most of the rebels, like Youssouf, come from.

But Youssouf stayed at the camp. Djotodia dropped the young boy off in person the day after Bangui was captured when he found Youssouf standing guard at a Séléka checkpoint.

“I want to be a soldier, fighting is the only thing I know how to do,” he says. The army beret glued to his head is almost as red as his eyes. “That’s because of white tobacco,” he confides. It is his “drug” – a mixture of Indian hemp and cassava flour. “With this, you don’t retreat, you’re never scared.”

Kidnapped by the LRA

Youssouf’s life is a convergence of the evils eating away at CAR for several years. His life was turned upside down for the first time in April 2011.

“For several days, Ugandan militia from the LRA (Lord’s Resistance Army) were looting and kidnapping people around in Birao (in CAR), where I lived. Even though it was dangerous, I went with my mother to the fields. But the LRA men found us. They raped my mother in front of me and then they shot her.”

The armed group forced the young boy to carry their ammunition. Then they turned him into a killing machine. “They taught me to use weapons like Kalashnikovs, RPG (rocket-propelled grenade) launchers… I became a man like them.”

Not long afterwards, Youssouf and other child soldiers, who make up 90 percent of the LRA forces, met Joseph Kony, the militia leader who is wanted by the International Criminal Court.

“The first time was in August 2011, near Zémio (in southeast CAR, on the border with the Democratic Republic of the Congo). He is very tall, with a beard and always wears a hat.

“He spoke to us very roughly. I saw him again soon after that, during the attack on Djéma, a nearby town. Kony lined up seven villagers and ordered us, the children, to kill them. I shouted out ‘Yes sir!’ and shot two people. That’s how I was able to stay alive.”

“The LRA kills children who are sick or too slow. One evening, I escaped,” he recounts.

After walking for three days, he was rescued near Rafaï, a southern town that borders DRC, by American troops deployed in a renewed hunt for Kony in 2012. Youssouf was placed in the care of the International Red Cross, who brought him home to Birao as part of a programme to reunite child soldiers with their families. But Youssouf had no family left in the town.

He found a job as an errand boy with close allies of Djotodia, the former diplomat who had returned from exile in Benin to lead the Union of Democratic Forces for Unity, one of the main rebel groups in the Séléka coalition that was formed later on.

“I wanted to enlist with them. But Djotodia said he did not want child soldiers. He offered to let me follow them to help with cooking and cleaning,” Youssouf says.

For all that, starting with the attack on Ndéle, northern CAR, in early December 2012, a few hundred kilometres to the south, the leader’s good intentions disappeared into thin air.

“As soon as the colonel told me to get onto vehicle number six, I knew I was going into combat. The vehicles numbered one to 10 were attack vehicles, the ones after that were for logistics. The sergeant gave me a gun and said to me, ‘Be a man.’”

“I continued the journey all the way to Bangui in that car, using my AK, town after town. How many people did I kill? I don’t know. War is war, that’s all. As far as I am concerned, I stopped being a child a long time ago. My only hope now is to be trained as a real soldier at last,” Youssouf said emphatically.

**Published under an agreement with InfoSud