GULU, Uganda, Jan 31 2012 (IPS) - Radio Mega FM’s transmission tower rises from the centre of Gulu town, transmitting talk shows and the latest Ugandan radio hits to listeners across the district. But it also serves as something of an informal memorial to community radio-driven peace efforts during the Lord’s Resistance Army’s destruction of northern Uganda. 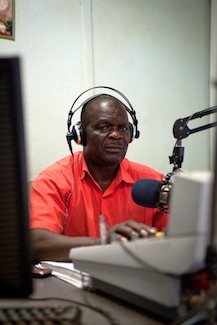 The LRA opened its war against the Ugandan government in 1987. In the mid-1990s, the commander of the LRA, Joseph Kony, turned on his own people, the Acholi. His fighters slaughtered thousands of villagers, kidnapped and impressed thousands more children into his army and caused nearly two million people to flee to Internally Displaced Persons (IDPs) camp.

Acholi leaders and NGO officials, responsible for communicating to a chaotic population where literacy was low and poverty high, needed a way to begin reorganising communities and to talk to the rebels about peace and reconciliation. Community radio stations in Gulu – the heart of Acholiland – became the linchpin of those efforts.

They turned to radio because it “can reach to the very least, to the farthest of places,” said Arthur Owor, the head of the Media Association of Northern Uganda, which is based in Gulu. With one handset and one battery, presenters could communicate with dozens of people. “The net returns were really high, in terms of the message,” he said.

On the handful of local stations like Mega that were around in the early 2000s, programming cropped up to engage the rebels in a peace dialogue, to offer a forum for communities to begin discussing justice and for family members to plead for their kidnapped children to flee the LRA and return home.

Okema Lazech Santo is the programme coordinator for Ker Kwaro Acholi, an organisation of traditional Acholi leaders, who described himself as being in “the thick” of the war and reconstruction efforts. He said radio was “useful in mobilising the people. Was useful in appealing to those abducted to come back home… The single tool that really worked effectively in bringing peace into northern Uganda.”

Members of northern Uganda’s radio fraternity take their role as peacemakers very seriously. They frequently draw contrasts between their response to the conflict in their community and the Rwandan genocide, where radio was used to incite murder.

Mega, which was founded in 2002 and was soon shored up with support from the Ugandan government and the British Department for International Development, was “set purposely to help settle the conflict in the region,” according to Nicky Afa-Ei, the station’s programme officer. He has been with the station since inception.

Mega’s primary message was that the region wanted peace. And the target audience was not necessarily the community, but the rebels “carrying their own handsets” who were within reach of the station’s signal, Afa-Ei said. Mega developed programs to discuss amnesty and traditional justice, sometimes with support from NGOs, and they invited people from “all walks of life” to record messages of peace: traditional leaders, parents, even schoolchildren.

And Mega found its audience. One day, during the height of the conflict in December 2002 – two months after the stations launched – Afa-Ei was running a talk show programme when he got a call from Kony, himself.

“That’s when people heard his voice for the very first time after a long, long time,” Afa-Ei said. “It was kind of friendly, but he was blaming the government on some parts. Saying the government were not being realistic.”

That began a pattern of Kony and his deputies using local radio stations to communicate with officials – and directly with the people – until the government deemed the rebel communiqués too propagandistic and refused to allow radio stations to run interviews without an official representative present.

Mega’s flagship programme “Come Back Home” – Dwag Paco in the local Luo language – is still spoken of reverently in the community, even by employees of rival stations. The programme attempted to cut through LRA propaganda and encourage children who had been forcibly conscripted to return to their villages. The host of the programme, John Lacambel, would bring former child soldiers onto the show to describe their return. To contravene the LRA’s contention that they would be killed if they went back to their families.

Dwag Paco was key to the region’s reconciliation efforts, Santo said. It “made so many of the rebels to defect and come back home.”

Now the north – especially Gulu – is beginning to boom. The cessation of hostilities – the result of inconsistent peace talks and a 2008 push by Ugandan forces – and the migration from IDP camps back to villages has paved the way for renewed infrastructure and new business. Mega’s radio mast no longer stands out in a skyline cluttered with gleaming banks, hotels and a grocery store. Seven other community radio stations now light up the dial.

“We are now in the process of recovery and stability,” Owor said. That means radio stations have also seen their roles transition toward helping rebuild and entertain Gulu. Instead of NGO programming, there are more talk shows and regional news programs. Music call-in programmes highlight the lunch hour.

But the programming still deals primarily with the fallout from the war, said Willy Chowoo, a presenter on Choice FM. That includes the divisive question of amnesty for returning soldiers. One of the LRA’s most horrific practices was forcing rebels to return to their own communities to loot, kidnap and murder. It helped sever the ties between the soldiers and their homes. With no place to return to, they were more securely attached to the army.

But with the LRA on the run, some of those rebels – many of whom were child abductees themselves – are trickling back into their villages. Pre-recorded dramas set up situations where villages are confronted with the question of how to handle the situation. The message, Chowoo said, is “you should not retaliate. People should not pay back. People should not take the worst with the worst.”

The work the stations are doing dovetails with the fourth of four interventions – reintegration of former rebels – that President Barack Obama laid out for the region ahead of sending U.S. troops to help hunt Kony down earlier this year.

There are also issues of land grabbing as people return from IDP camps only to find their homes taken over by someone else, food security in a community that has long been provided for by NGOs and basic health care in the absence of infrastructure. Traditional leaders and community members hash out these problems in call-in shows and experts offer solutions during educational programmes.

While northern Ugandans are constantly confronted with the legacy of the past, Afa-Ei said the area’s community radio stations are trying to “forge a way forward for the future.”