RIGHTS-UGANDA: ‘Our Mission is To End Impunity’ – Moreno Ocampo

KAMPALA, Jul 13 2009 (IPS) - On a visit to Uganda, Luis Moreno Ocampo, prosecutor for the International Criminal Court (ICC) has again called for joint action by governments in the region to arrest the top commanders of Ugandan rebel group, the Lord’s Resistance Army (LRA). 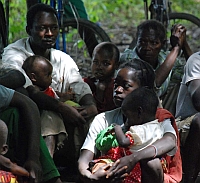 The ICC prosecutor insists all parties to the Rome Statute in the Great Lakes region have an obligation to arrest LRA leader Joseph Kony, who has been operating in the DRC and the Central African Republic since abandoning peace talks in April 2008. Uganda, the DRC and the CAR are all members of the ICC.

The ICC issued arrest warrants against four LRA commanders in 2005. Kony faces 33 counts of crime against humanity and war crimes including, murder, sexual enslavement, rape and forced enlisting of children.

Moreno Ocampo arrived in Uganda on Saturday from the DRC, where he had met with local communities in the conflict-torn province of Ituri. In Bunia, Moreno Ocampo told Congolese, “We are prosecuting those most responsible for the crimes committed in Ituri, but our mission is also to end impunity to prevent the commission of future crimes.”

The trial of former DRC militia leader Thomas Lubanga Dyilo for war crimes is currently taking place in the Hague, and two others, Germain Katanga and Mathieu Ngudjolo, are expected to appear in court in September.

Uganda’s LRA leaders have been moving between DRC and CAR for a little over a year, since they were expelled from South Sudan shortly after the breakdown in talks mediated by Southern Sudanese vice president Riek Machar and former Mozambican president Joachim Chissano.

At one point during those negotiations, the Ugandan government attempted to have the ICC warrants withdrawn. They were upheld, and the warrants have been blamed in some circles in Uganda and abroad for the last-minute failure of the Juba peace process.

Moreno Ocampo said these claims are baseless, arguing that Kony used the time afforded by the peace talks to regroup and re-arm his forces.

Responding to Moreno Ocampo, Uganda’s minister for international affairs, Henry Okello Oryem, announced that the LRA leader and his indicted colleagues were no longer eligible for trial in Ugandan courts after they refused to sign the peace agreement in Southern Sudanese capital Juba.

“Mato Oput (a traditional reconciliation system amongst the Acholi in northern Uganda) does not apply for them now because they refused  peace. If Kony or any other indicted commander is arrested within the Republic of Uganda now, he will be handed over immediately to The Hague. Similarly if he is caught in the (Democratic Republic of) Congo, Congo has the obligation to hand him over to the Hague.”

The Ugandan government – assisted by the U.S. and other forces in the region – has attempted to capture the LRA rebels without success. One of the raids, in February, triggered violent attacks on civilians in northeastern DRC by the LRA.

On Uganda’s position on the arrest warrants against Sudanese president Omar al-Bashir who could potentially visit Uganda at the end of July for a conference, Oryem restated Uganda’s commitment to the International Criminal Court, saying that the inspector-general of police would take a decision on arresting Bashir should he enter Uganda.