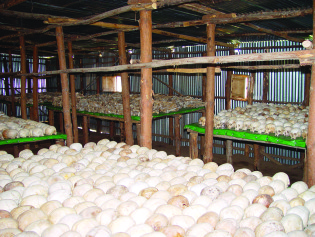 By Pavol Stracansky
Healthcare systems in Eastern Europe and Central Asia remain woefully unable to cope with HIV/AIDS as the region’s raging epidemic – the fastest growing in the world – takes on a new dimension, a senior UN official has told IPS.

By Edwin Musoni
Bernard Kayumba, the mayor of Karongi district in western Rwanda, remembers just what it was like to be caught up in the genocide that claimed the lives of almost one million people in 100 days 19 years ago.

By Emmanuel Chaco
A report by the United Nations Joint Human Rights Office has slammed the government and security forces in the Democratic Republic of Congo, condemning electoral violence linked to the Nov. 30 elections which led to at least 33 deaths in the capital, Kinshasa.

By Emmanuel Chaco
The International Criminal Court delivered its first verdict Wednesday: Thomas Lubanga Dyilo was found guilty of recruiting children under the age of 15 to fight in a militia group in the eastern Democratic Republic of Congo.

RIGHTS-DR CONGO: Disabled Left to Fend for Themselves

By IPS Correspondents
The outlook for people living with disabilities in the Democratic Republic of Congo remains bleak, despite a variety of efforts to improve their lot and bring them in from the margins of society.

By IPS Correspondents
Governments and civil society organisations in Central Africa are slowly developing strategies in response to global warming. But specialists say the steps being taken seem hesitant in the face of emerging realities.

By Correspondents
Security forces in the Democratic Republic of Congo have been responsible for the deaths of at least 24 people since President Joseph Kabila's re-election was announced on Dec. 9, Human Rights Watch says.

By Anselme Nkinsi
Nadine Mbwol suffers from konzo, an epidemic paralytic disease that affects the lower body. "I lost my marriage because of this disability," she says sadly.

By Badylon Kawanda Bakiman
The 11 candidates contesting presidential elections in the Democratic Republic of Congo all pledge to improve peace and security in the country - promises received with varying degrees of scepticism by Congolese voters.

By Emmanuel Chaco
"In truth, none of the candidates and none of the parties have a programme for society," asserts Mastaki Mushosi, one of the leaders of the National Union of Catholic School Teachers in the Democratic Republic of Congo.

By IPS Correspondents
They should be wary of each other. The historical conflict between their ethnicities has resulted in Africa’s largest genocide.

By Kristin Palitza
Murhula’s* life changed forever when he was nine years old. It was the year that he learned to kill, torture and rape.

By Jessica McDiarmid
The adoption of international guidelines to regulate so-called land grabs has been pushed to next year after negotiators failed to agree on conditions for large-scale land investments and enforcement.

DR CONGO: No Hope for Free and Fair Elections

By Zukiswa Zimela
With six weeks to go before the presidential and parliamentary elections in the Democratic Republic of Congo, civil society organisations say the elections will not be fair, as many doubt the ability of the country’s electoral authorities to ensure transparency.
Next Page »
ADVERTISEMENT ADVERTISEMENT