BUKAVU, DR Congo, Nov 2 2011 (IPS) - Murhula’s* life changed forever when he was nine years old. It was the year that he learned to kill, torture and rape. 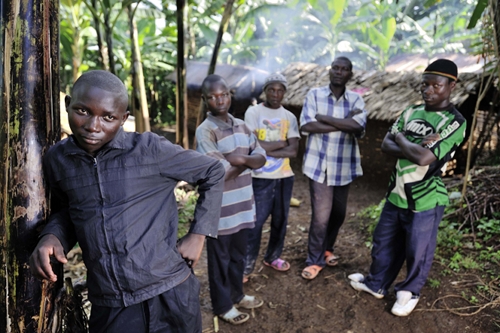 It was the year militia entered his school in a small village near Bukavu, South Kivu in the Democratic Republic of Congo (DRC) and forced him and several others to follow them into their camps in the forest, where they trained them to become soldiers. “Many bad things happened that I cannot talk about. It was very dehumanising,” remembers Murhula, who is now 25. For nine years he fought for different military groups: first the Rally for Congolese Democracy, then the Mudundo, the Maï-Maï and eventually the Congolese national army.

An estimated 30,000 children in the DRC, more than a third of them girls, have been turned into child soldiers to help fight a war for political and tribal power as well as natural resources in which four million people have died to date.

The DRC has ratified a number of international treaties to protect the rights of children. In 2001 this Central African nation signed the United Nations Security Council Resolution 1341, which demands an end to the recruitment of child soldiers and their demobilisation and rehabilitation. But there is little the Congolese government has done to implement those agreements, says Amnesty International.

After the DRC’s 2006 democratic elections and especially the 2008 Goma peace accord, which brought some measure of peace to eastern DRC, international aid organisations such as the U.N. Children’s Fund, catholic humanitarian agency Caritas, and others jumped in to help demobilise child soldiers. (The country goes to the polls on Nov. 28 for its second democratic election since independence.)

But the psychological support the thousands of traumatised and brainwashed youth need in order to return to a normal life is not part of the demobilisation.

The DRC is left with a generation of children and young adults that cannot remember a life without violence. Traumatised by events that neither adults nor children should ever have to experience, former child soldiers have become feared aggressors, thieves and addicts who struggle to reintegrate in society.

Even parents often refuse to take these children back into the folds of their families because, as Murhula’s example shows, there is a dark truth lurking in many a former child soldier’s past.

Utterly brainwashed by years of strict, hierarchical militia ideology, the boy started to enjoy inflicting pain, justifying his acts as being “normal in a war.”

“I liked being a soldier. I don’t know how many people I killed. In any case, I was just following orders,” he says defiantly.

It is an astounding contradiction to come to terms with – most child soldiers are traumatised victims and vicious perpetrators at the same time.

How this conflicting profile plays out on their psyche and how it needs to be treated is now being researched by German psychologists Tobias Hecker and Katharin Hermenau from the University of Konstanz. They currently work with soldiers at a rehabilitation centre in Goma, the regional capital of North Kivu in eastern DRC.

“We realised that those who had fun being violent suffer less from post-traumatic stress but are more difficult to integrate into society, because they are ready to become violent again,” says Hermenau.

Based on more than 200 interviews, the researchers found that a shockingly low number of former soldiers – 25 percent – experience post-traumatic stress disorder. This means three out of four continue to link positive emotions to violence.

“We see a lot of pride, lust for vengeance and power. Many tell of bloodlust,” explains Hermenau.

The research findings highlight how problematic it is to reintegrate child soldiers back in society.

One organisation that has given itself this difficult task is the Centre for Professional and Artisanal Apprenticeship (CAPA) in Bukavu, the provincial capital of South Kivu, which lies a good 100 kilometres south of Goma. The non-profit organisation teaches ex-child soldiers a multitude of crafts including bricklaying, carpentry, leatherwork and upholstery.

CAPA director Vital Mukuza has no illusions about what it means to rehabilitate former child soldiers.

“It’s extremely difficult. They are aggressive, irritable and prone to violence and vandalism, constantly posing a threat to others.

“They don’t respect rules or authority and are used to taking whatever they want,” he adds. “It takes months for them to adapt to normal life.”

It is here that Murhula is trying to start a new life by learning how to build guitars.

For the past couple of years he has thrown himself into learning this new profession, hoping he will be able to open a small shop some day, maybe even start a family.

“I don’t want to think about the past anymore,” he says.

But most of Congo’s 30,000 child soldiers lack such a network of psychological, social and economic support. Once demobilised, they have to fend for themselves and often lead isolated, poverty-stricken existences.

Mulume*, 22, who was forcibly recruited by the Maï-Maï when he was 17, is now unemployed and admits he feels quite lost. Although he was allowed to return to his home village of Kahungu, 65 kilometres north of Bukavu, he can sense deep distrust all around him.

When asked if he sees a future for himself, he shakes his head “no”.

“I simply have to accept my fate,” he says.