KINSHASA, Oct 28 2011 (IPS) - Women make up just 12 percent of the roughly 18,000 candidates who will stand for election to parliament in the Democratic Republic of Congo’s Nov. 28 elections. 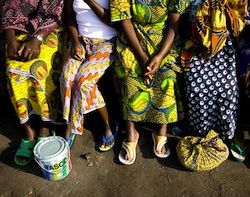 The leading parties are doing little to ensure greater numbers of women are elected to parliament, but Congolese women are acting for themselves. Credit: Aubrey Graham/IRIN

According to the Permanent Framework for Dialogue for Congolese Women, a gender equality pressure group, only 42, or 8.4 percent, of the 500 members of the current National Assembly – the lower house of parliament – are women.

And there are just five women in the 108-member Senate, representing 4.4 percent, while the provincial legislatures have a total of 43 women representatives, or 6.8 percent of a total of 632.

The Southern African Development Community’s Gender Protocol, adopted by member states including DRC in 2008, calls for 50 percent of decision-making positions to be held by women by 2015.

The Protocol commits governments to not only raise public awareness of the link between good governance and equal representation of women in decision-making, but to take legislative and other measure including affirmative action. But there are precious few signs that the leading parties are committed to meeting these goals.

In his campaign platform, announced in September in Kingakati, near Kinshasa, President Joseph Kabila – who is running for re-election on Nov. 28 – described DRC as an “emerging” nation, possessing a reserve of intelligence and know-how, and a regional power at the heart of Africa, but said nothing explicit about addressing women’s demands.

The same can be said of the programme put forward by the principal opposition leader, Etienne Tshisekedi, head of the Union for Democracy and Social Progress party, who has stressed patriotisim, national unity, development and change to improve governance of the country.

Françoise Ikwapa, from the League of Women for Development, Education and Democracy, believes that the platforms of the two leading presidential candidates guarantee nothing for gender equality and parity, even though Article 14 of the constitution requires the government to work towards this.

Congolese women face major challenges, according to Jacquie Rumbu, director of the National Agency for Combating Violence Against Women and Girls, confirmed the numbers. “DRC is characterised by a feminisation of poverty and armed conflicts have aggravated existing inequalities.”

Despite the presence of the U.N.’s largest peacekeeping mission, the United Nations Stabilisation Mission in Congo (MONUSCO), armed groups including the Democratic Forces for the Liberation of Rwanda (an exiled Rwandan rebel group known by its French acronym, FDLR) and the DRC’s own armed forces, are accused of continuing to commit rape with impunity, particularly in the east of the country.

An article in the February edition of a magazine published by MONUSCO said, “Around 200,000 women were raped in DRC over the last 12 years of war.”

On other fronts, early marriage and inadequate access to healthcare during pregnancy and childbirth puts women’s lives at risk.

“In DRC, the maternal mortality rate is 549 deaths for every 100,000 live births,” says Dr Protais Musindo, Assistant Director of the National Programme on Health and Reproduction, referring to the last demographic and health survey, carried out in 2008.

Women candidates are increasingly finding their voice on these and other issues as various non- governmental groups have redoubled their efforts to increase the number of elected women, including setting up women’s leadership circles and an electoral clinic which supports candidates in their campaigns. Several forums were organised with this aim across the country between 2010 and 2011.

“Once elected as a member of parliament, I will try to propose laws that will enable the economic independence of women and fight against poverty,” says Georgette Biebie, a candidate in the constituency of Kikwit, in the southeast of DRC. She is a candidate for the Alliance for the Renewal of the Congo.

Interviewed by IPS in the Congolese capital, Kinshasa, Biebie also promised to be an active participant in parliament in order to spur the government into action to reduce maternal mortality and more effectively apply laws that protect children, women and people with disabilities.

Biebie adds: “I’m going to try to take action in the fight against violence against women, in the struggle against climate change, and to gain access to Green Funds to encourage women to develop their agricultural output while protecting forests.”

Jeanne Lembwa Kabange, a candidate standing for election in the southeastern city of Lubumbashi for the Movement for the Integrity of the People, plans to lobby for legislation that protects women, but says women should not see men only as opponents. “Women must not neglect their male partners. Together, they will develop the country through complementary action,” she says.

Chantal Malamba, an Action for Development Party candidate in Mabimba, in the southwest, says if she is elected, she will prioritise the questions of livelihoods, security and development. “DRC faces serious problems of access to water and electricity, aside from the thorny problems of poverty and unemployment.”

Asked what she thought of the promises made by these female candidates, Yvette Mova, a housewife in the Kinshasa district of N’djili, says women candidates’ plans of action are attractive.

“Women mustn’t go backwards, because they are just as capable of working hard as men. I will vote for one of them on Nov. 28. I would even have wanted us to have a female candidate for president of the republic to make changes in this country. But there isn’t a candidate for this post,” she tells IPS.

Solange Mukwanga, a vendor in the Liberté market in the Masina district of the capital, is less enthusiastic. “I don’t have confidence in women. They are vain and too weak despite their programmes,” she says.

For Didier Mboma, a civil society activist, women candidates stand a good chance in the elections. “They can readily win seats if other women, who make up more than 51 percent of the electorate, choose them. Some men could also vote for them if they can be won over,” he tells IPS.