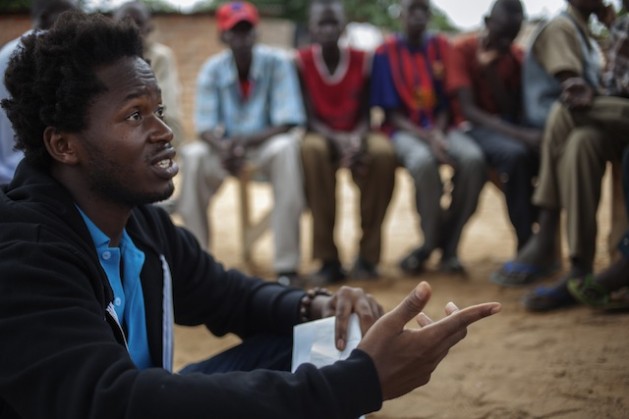 CAPE TOWN, South Africa, Aug 28 2012 (IPS) - The protection of children remains critical in the Central African Republic, where parents willingly give their children to armed groups in exchange for protection and services.

This is according to United Nations Children’s Fund(UNICEF) ambassador Ishmael Beah, a former child soldier from Sierra Leone, who spoke to IPS during his visit to South Africa.

Beah had just returned from a trip to CAR where he witnessed the release of 10 child soldiers in the conflict-ridden, northeastern town of N’dele by the rebel group the Convention of Patriots for Justice and Peace (CPJP).

The move comes after the CPJP signed a peace accord with the government on Aug. 25 – yet another small step towards ending years of violence in the country. The release of the children was the group’s show of commitment towards peace. However, more than 2,500 boys and girls are thought to still work for various armed groups in the Central African nation.

Seven years of civil war have led to food scarcity, a collapsed economy and limited access to healthcare and education. Despite its mineral wealth, CAR remains one of the world’s least-developed countries. In 2011, CAR ranked 179 out of 186 countries in the U.N. Human Development Index.

“In CAR, parents willingly give their children to armed groups in exchange for protection and services, even though it’s against the children’s human rights. That makes it very difficult to negotiate the release of children,” Beah told IPS.

One of the armed groups operating in CAR is the Ugandan Lord’s Resistance Army (LRA), led by internationally hunted Joseph Kony. Two LRA leaders under Kony, Dominic Ongwen and Okot Odhiambo, who are sought by the International Criminal Court, are reportedly hiding in CAR.

The LRA has increased its attacks in the country since early 2012 and continues to abduct children as fighters.

Beah was himself forcibly recruited into Sierra Leone’s civil war, in which his parents and two brothers were killed, when he was 13. He fought alongside rebel groups for two years until he was removed from the army and placed in a rehabilitation home.

He now lives in New York, where he works as a human rights activist. His book “A Long Way Gone: Memoirs of a Boy Soldier” has been translated into 35 languages and was on the New York Times bestseller list for more than 50 weeks.

Q: You witnessed the release of 10 child soldiers in CAR, one of the world’s poorest nations. What is life like there?

A: The government of CAR only has control over the capital city, Bangui. When you arrive in N’dele you understand how it is possible for an armed group to operate there; it is because the government is not providing social and economic services. Poverty is very stark, there are no resources or opportunities.

So it’s the armed group there, the CPJP, which provides some services. That’s why the group is very entrenched in the community. You see them walk around with weapons everywhere.

Q: Armed groups are part of the social fabric?

A: Yes, exactly. Still, the kids don’t want to fight. Once you take them away from the commanders, they tell you “I don’t want to do this.” But there are no alternatives beyond joining the armed group. The community relies on them. And the rebels have all the opportunities.

Q: How does a release operation happen?

A: The military doesn’t want to release the kids. They hide them. When you arrive at a military camp, the children who were identified are nowhere to be found. There are negotiations with the commanders until, slowly, they bring the kids out. After that, you have to leave immediately, because some of the children’s families live within the communities (and belong to the rebels).

The children are brought to a transit and rehabilitation centre in N’dele, where they receive psycho-social therapy as well as vocational training or are sent back to school.

A: Yes. Added to that is that the rebels have weapons and ammunition, while you don’t have any protection. You rely on them keeping their promises. Everything about the situation is dangerous. When we landed in N’dele, the whole airport was surrounded by rebels with brand-new, sophisticated weapons, guarding the place. You are very exposed.

Q: What will happen to the rest of the estimated 2,500 child soldiers in CAR?

A: Right now, the rehabilitation centre takes care of 35 kids, and I witnessed the release of 10 more. Slowly, more and more are being released. All (three) rebel groups in the country have signed action plans to release children. But if nobody forces them, they will not do it.

Q: Visiting N’dele was to some degree a return to your past. How did that feel?

A: It brought up a lot of memories. I was driving in the car with the child soldiers who had just been released and could feel their uncertainty about being removed from what they know. I was in that same position (when I was a child soldier). I told them: “Things will be difficult, but you’re going to get through this.”

Once they understood that I had the same experience, there was a kinship that helped ease the situation a little. It’s such a daunting situation. You had this power of the weapon – some of them were lieutenants – and all of a sudden you’re just a child again, trying to figure out what to do with your life.

Q: How did they react when they heard your story?

A: They asked me questions repetitively. “Is it really possible to get through this? Can we actually have another life after this?” I was very honest with them. “It’s possible but it’s not easy. You’re going to be frustrated a lot. It’s not going to be as fast as you like.”

They are coming from an experience where they get things as fast as they like because they have a weapon. They understand these things when they come from someone like me.

Q: Are there viable alternatives for children in a poverty-stricken country like CAR?

A: There are viable alternatives, but they require long-term investment. If you want successful rehabilitation, you have to be willing to look beyond one year.

Q: What are the core demands of the CPJP and other armed groups?

A: During my visit, I talked to CPJP leader Abdoulaye Hissene. He said he started his group because of social-economic inequalities in the country. The official demand is for the government to provide services. Of course he is right, but he is using the argument to pursue his own, personal agenda. He is tapping into people’s needs, so they buy into his ideology. But then the only option he provides is armed struggle, which doesn’t solve people’s problems.

Q: What is Hissene’s hidden agenda?

A: He will not tell you, but from close observation you can tell that he wants to benefit from the natural resources in the area, the diamonds, the gold, and so on. In the end, all natural resource wealth goes to the armed groups or the government, but never reaches the people. That’s the problem.

Q: What presence does the LRA have in CAR?

A: The LRA is very strong in the southeast of the country. A lot of work needs to be done in that area to protect children. Since the beginning of this year, there have been frequent attacks and abductions (of children) by the LRA. Already, the government has no capacity to fight the armed groups in the country. Now there is this foreign group that has come in that is even stronger.

Q: Do you see any chance of the LRA agreeing to peace in CAR as well?

A: I am not sure. The LRA is very unpredictable. But what I do know is that many young people from this group would run away if they had a secure place to go to, instead of being arrested by authorities that try to get information out of them.

If there were a place that took them back as children and rehabilitated them, they would find a way to escape. You can’t just tell someone to put down a gun and then leave him out in the cold or throw him into prison. Structures need to be put into place for these children to leave. To get to the heart of the LRA or any other armed group you need to make sure that the candidates who can be recruited are not available.