WASHINGTON, Jun 23 2012 (IPS) - Activists are aiming to renew the fight against the Lord’s Resistance Army, the Ugandan rebel group made infamous by its ruthless leader Joseph Kony, despite noticeably diminished concern for the issue just months after the release of a controversial yet viral video about the leader.

Seeking to push the anti-LRA movement forward, activists have embarked on a tour across the United States to raise awareness. The most prominent are Father Benoit Kinalegu, a Congolese priest and president of the Dungu-Doruma Diocesan Commission for Justice and Peace, and Sister Angelique Namaika, who runs Dynamic Women for Peace, which provides assistance to female and child victims of the LRA.

Father Benoit and Sister Angelique testified before the U.S. Congress Jun. 19, hoping to maintain awareness in the U.S. of the LRA’s brutality. “Because of their trauma, the refugees and child survivors refuse to go back home as long as Joseph Kony is out in the bush and as long as the war is not over,” Sister Angelique told Congress’s Human Rights Commission. 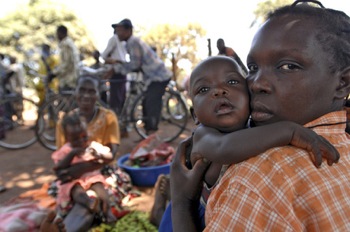 The Ugandan rebel group the Lord’s Resistance Army has killed hundreds of thousands and displaced even more, such as the South Sudanese refugees above. Credit: UN Photo/Tim McKulka

“They prefer to die of hunger than to return to their homes.”

In 2004, the BBC estimated the death toll of the LRA’s victims at more than 100,000. And while it is difficult to ascertain exact numbers, thousands more have been brutalised since.

Activists on the ground in Central and East Africa, however, are fairly resourceful, using whatever limited means at their disposal to combat the LRA, including using a high-frequency radio system to try to appeal to LRA soldiers to defect.

“These radios allow us to transfer the information around the world” and the region, Father Benoit explained. Nevertheless, “the number of devices that we have is not enough to cover the area,” he added.

Sister Angelique has been a voice of compassion in the region, trying to provide help to traumatised women and children in the area. “Until now, we have not seen any organisation address this issue because there is a war going on,” she said.

Other activists are calling for more political measures. “We need personal engagement from President Obama,” said Paul Ronan, the co-founder and director of advocacy, for the group Resolve, which works to end the LRA’s atrocities and create peace in affected Central African communities.

“Unfortunately, this administration has been slow in utilising funds,” he said in reference to the allotment of military funds towards the struggle.

In October 2011, the Obama administration deployed approximately 100 U.S. Special Forces agents to Uganda, South Sudan, the Democratic Republic of Congo and the Central African Republic. The U.S. troops mainly served in an advisory role to Ugandan troops in the hunt for Kony and the fight against the LRA.

It was the first time since 2003 that the United States specifically deployed troops to aid in an African conflict. In 2003, President George W. Bush sent a small number of troops—estimated between 500 and 2,000—to assist in the Second Liberian Civil War. (NATO troops intervened in Libya in 2011, although U.S. naval forces were involved in firing Tomahawk missiles at Libya.)

“Our advisers will continue their efforts to bring this madman to justice and to save lives,” Obama said in a speech at the U.S. Holocaust Memorial Museum in April. “It’s part of our regional strategy to end the scourge that is the LRA and help realise a future where no African child is stolen from their family, and no girl is raped, and no boy is turned into a child soldier.”

The region has seen some progress, Ronan said, thanks to two factors that have weakened Kony’s grip over the LRA. The first was “the relative isolation of Kony over his senior commanders”. According to Ronan, intelligence places Kony’s location possibly in South Darfur – though if his location were known, he would be dead. The second was the capture in May of senior LRA commander, Caesar Achellam.

Nevertheless, the LRA’s atrocities have not garnered quite the support that the hoopla surrounding it would seem to suggest. The original KONY 2012 video, produced by the advocacy group Invisible Children, went viral, and has been viewed more than 91 million times since March.

Many critics have branded this video as a “slacktivist” – a portmanteau term of “slacker” and “activist”- cause, which has not translated into any prolonged action.

After so much initial interest, support for the cause has subsided. A sequel to the original video, entitled “KONY 2012 Part II: Beyond Famous” boasts comparatively few hits – 2.2 million – since its release in April.

In a report released mid-June about the conflict, United Nations Secretary-General Ban Ki-moon said the biggest challenge was providing aid and protection to the war-torn region. “The initiative itself lacks adequate and predictable funding for its operations,” Ban wrote.

“Without the necessary resources, the African Union will be unable to execute this important task fully.”