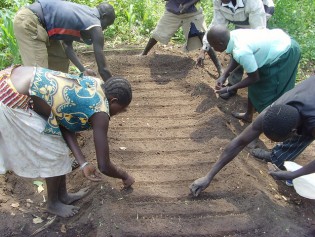 By Adam Bemma
“What is the benefit when children are crying and people are dying due to hunger? There is no need to cry when you have the potential to dig,” sings Juba-based dancehall reggae group, the Jay Family, in their latest single “Stakal Shedit,” which means “Work Hard” in Arabic.

By Adam Bemma
Surrounded by endless rows of green tea plants, Mary carefully picked a leaf and placed it into a basket next to her. It seemed like an ordinary day at work for the 13-year-old girl from Meru, in central Kenya. After work she escaped to the adjacent farm for privacy, but was instead attacked and raped by a middle aged man.

By Adam Bemma
John Daffi climbs to the top of a hill overlooking a scenic Rift Valley wall and the Ngorongoro forest, where wildlife migrates between the world famous Ngorongoro crater and Tanzania’s Lake Manyara. Daffi, 59, looks down upon his family’s farm below and reminisces about the time his father first brought him here as a boy.

By Adam Bemma
"There is a saying that all Rwandans believe in. You can't forgive if you forget, but when you remember, you know what harmed you and you can forgive and move forward," Honore Gatera tells IPS as he walks through the grounds of the Kigali Memorial Centre in Rwanda’s capital.
ADVERTISEMENT ADVERTISEMENT