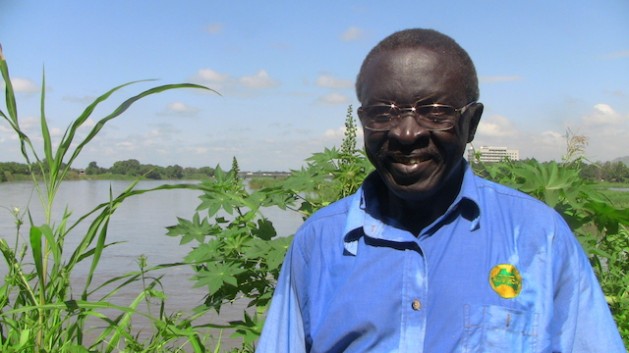 JUBA, Aug 21 2014 (IPS) - Along the fertile banks of sub-Saharan Africa’s White Nile, one of the two main tributaries of the Nile River, a war veteran’s co-op is planting for a food secure future in South Sudan, a country potentially facing famine.

Wilson Abisai Lodingareng, 65, is a peri-urban farmer and founder of Werithior Veteran’s Association, or WVA, in Juba, South Sudan. The association is a group of 15 farmers ranging in age, with the youngest being a 25-year-old veteran’s son. This group of 15 farmers tends to a garden, located six kilometres outside Juba, South Sudan’s capital, where they grow nearly 1.5 hectares of vegetables.

“I have seven active members in the group, all former SPLA [Sudan People’s Liberation Army] troops. I call them when it’s time to weed the garden,” Lodingareng told IPS. “I visit once a day, each morning, to check the health of the crops and too see what’s ready for the market.”

Some of the other WVA members have been displaced from their homes and are now living inside the UNMISS, United Nations Mission in South Sudan, Protection of Civilians camp in Juba.

Since the conflict began Dec. 15, 2013 between the government forces of South Sudan President Salva Kiir and the rebel forces of former Vice President Riek Machar, 1.5 million have been displaced from their homes. Three-and-a-half million South Sudanese are suffering from emergency levels of food insecurity, according to the Food and Agriculture Organisation of the United Nations (FAO).

Lodingareng said obtaining a plot of land along the Nile River was difficult with many international investors vying for this prime agricultural real estate. It took him almost three years to acquire a lease from the community which owns the idle land.

So far this year he has transformed the field with long grass and weeds into a garden with leafy vegetables and herbs sprouting. WVA cultivates okra, kale, mulukhiyah (jute leaves) and coriander.

“These are short impact crops which grow quickly, within one to two months,” Lodingareng said. “Okra is harvested every three to four days.”

The philosophy behind the WVA garden is to see land as a resource not to be wasted. As Lodingareng looks around his garden he sees a future expansion into the surrounding land, also lying idle.

“I’m looking at expanding to grow food crops like maize, potatoes, carrots and eggplant,” he said. “The first year has been a struggle. The next year should be much better.”

Simon Agustino is the programme officer at Mennonite Central Committee, or MCC, in South Sudan.

“Wilson [Lodingareng] came to our office with a proposal asking for assistance. The veterans had no hope and no way to provide for their families,” Agustino told IPS. “People thought he was wasting his time with digging. But he didn’t give up.”

MCC provided him with some capital for leasing the land, the training of beneficiaries, fruit and vegetable production, farm supplies and tools as well to monitor WVA’s progress.

“Finally he got land and is now yielding and his crops which are being sold at the market. As a sign of improvement, more veterans are considering joining,” Agustino said.

According to Agustino, most SPLA veterans take to criminal activity after being de-commissioned, but Lodingareng wouldn’t turn to cattle raiding or using a weapon to rob and steal. He has a vision for the future of South Sudan.

“I did my part to put my country on the path to self-determination,” Lodingareng said. “Now my approach is to work hard. Me, I will do anything that can pull me out of poverty and improve my situation financially.”

Londingareng fought with the SPLA from 1985 to 2008, and when he wasn’t re-activated into the military six years ago he began to think back to his early days as an economics student at Makerere University in Kampala, Uganda.

“I took a course and wrote a paper on agriculture economics. I was taught that land is food and that crops share behaviour traits with humans,” he said.

While Lodingareng comes from the Toposa, a cattle-herding pastoralist tribe in the southeast of the country, his wife is Nuer, one of the country’s two biggest ethnic groups, along with Dinka, in South Sudan.

“We were hunted. I hid my wife in town and with help from MCC, I took her to Uganda.” he said. “I came back to find out people had broken into my house. It was completely ransacked.”

WVA veterans come from various tribes in South Sudan. Its work demonstrates that agriculture could be a way of bringing South Sudanese together, looking past tribal differences, and planting together this rainy season.

Lodingareng believes it’s never too late to take up the cause of agriculture, even while millions are displaced and the country is on the brink of famine.

“The political climate has discouraged many from planting this season,” he said. “But if everyone planted gardens things will improve.”

MCC is looking at ways to start a peace and reconciliation programme with the help of WVA. “He has many ideas on how to end the conflict,” Agustino said.