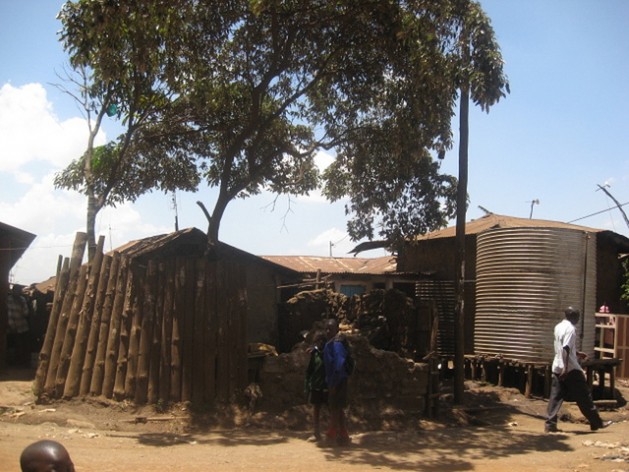 In 2009, nearly 5,000 Kibera residents were relocated to the KENSUP Soweto East settlement, pictured here. However many say the housing project has become a slum. Credit: George Kebaso/IPS

NAIROBI, Jul 22 2014 (IPS) - At the eastern edge of Nairobi’s Kibera slum, children gather with large yellow jerry cans to collect water dripping out of an exposed pipe. The high-rise grey and beige Soweto East settlement towers above them. A girl lifts the can on top of her head and returns to her family’s third floor apartment.

Inside, 49-year-old mother Hilda Olali is sweeping the floor. She’s had enough. Her family of five has no running water or electricity in their two bedroom apartment.

The rancid smell of refuse wafts into the apartment throughout the day. Hilda Olali's considering a move back to the slum, turning in her family's brick and mortar home for her old mud and tin shack.

“When we first arrived we really enjoyed life. But now it’s hard because we don’t have water for weeks. This forces me to go and buy water outside. I can’t afford that,” she told IPS.

Outside her kitchen window, garbage has been accumulating over the last six months. The rancid smell of refuse wafts into the apartment throughout the day. She’s considering a move back to the slum, turning in her family’s brick and mortar home for her old mud and tin shack.

“In the slum things were cheap. When we came here they took us as if we were people who could afford expensive things,” she added.

It’s been 12 years since the Kenya Slum Upgrading Programme, or KENSUP, launched its pilot project in Kibera. Many residents feel the government and United Nations’ Human Settlements Programme, or U.N. Habitat, have abandoned them soon after its doors opened.

In 2009, nearly 5,000 Kibera residents were relocated to the KENSUP Soweto East settlement. The 17 five-storey buildings are home to around 1,800 families. Population estimates in Kibera range from 800,000 to 1.2 million, making it one of Africa’s largest slums.

“We were told to move and it’s like we were forced. They [KENSUP] were carrying everything for us. Transport was arranged by them. I had seven rooms in the slum. Here I only have three,” Olali said.

According to the U.N., cities are now home to half of the global population. Forty percent of Kenya’s 43 million people are living in urban areas. More than 70 percent of Nairobi’s 3.1 million people live in 200 informal settlements, or slums. A lack of affordable housing in the city makes Kibera an attractive place to settle.

Godwin Oyindo, 24, is a recent university graduate and a close friend of Olali’s son. He grew up in Kibera and was hopeful this housing project would change the lives of all its residents.

“This slum upgrading project was established to address a few things in Kibera, the security of tenure, the housing of people, accessibility to services, and also to generate economic activities. One of their main objectives is a slum free society,” Oyindo told IPS.

Back in 2003, the government of Kenya and U.N. Habitat began working together to improve housing and quality of living for residents not only in Nairobi, but in Mombasa, Mavoko Kisumu and Thika. KENSUP is mandated to improve living standards for 5.3 million urban slum dwellers by 2020.

U.N. Habitat came on board with its Participatory Slum Upgrading Programme, working alongside KENSUP providing expertise and technical advice. The officer in charge of this department, Joshua Mulandi Maviti, said objectives have been met in all projects.

“Kibera was the focus of our work with the ministry,” Maviti told IPS. “But we also coordinated infrastructure, land tenure, water and sanitation projects across Kenya, in Mombasa, Kisumu and Mavoko.”

Justus Ongera, 24, shares a room with his younger sister in a two bedroom apartment in the Soweto East settlement. The two share the apartment with another family. Ongera believes he may need to instruct residents on how to improve sanitation.

“When we first moved in the garbage outside was cleared every two weeks. Now it’s been rotting there under the sun for six months,” he told IPS. “This is a serious health hazard. Something needs to be done.”

Due to the 12 years which have elapsed since the contract began, U.N. Habitat ended its collaboration with KENSUP once contracts expired, according to Maviti. But he assures this doesn’t mean it’s the end of the relationship.

“The government of Kenya and the ministry haven’t engaged with us on the issues faced by Soweto East residents. We need to hear from them officially to be able to help,” Maviti said.

Olali is now weighing her options, whether or not she should move her three kids out of this apartment project and back into the slum. The fact that she has no running water forces to make a long trek through Kibera to visit the public toilet. This costs her five Kenya shillings each time.

“It all adds up, costing me even more money,” Olali said. “Some women didn’t even know how to flush a toilet before moving in, but now they do. We’ve all experienced a lot living here.”

Kenya’s Ministry of Land, Housing and Urban Development, along with KENSUP, turned down requests to be interviewed for this story.