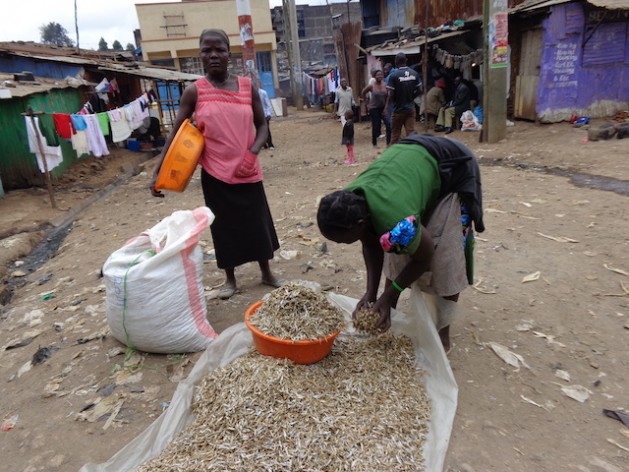 Residents of Nairobi's Mathare slum, one of the largest in Kenya. Here, scores of NGOs and community based organisations are trying to improve the plight of the poor who live here. Credit: Miriam Gathigah/IPS

NAIROBI, Feb 26 2014 (IPS) - Ben Okoth, 45, was born and raised in Kibera, the largest urban slum in Africa, situated just outside of Nairobi, Kenya’s capital. Over the years, he has encountered many non-governmental organisations (NGOs) working to improve the plight of the poor who live here.

But, Okoth says, there also those NGOs that have done nothing more than use the slum as a “money-minting machine”.

“They often rent a small structure and write the name of the organisation on the door. Then they disappear. The next time you see them, they will be accompanied by white people and they will be telling them [about the] great things they have been doing in the slum,” he tells IPS. Many of these NGOs are locally referred to here as “briefcase” NGOs because they are not operational.

Statistics from the Kibera Law Centre, Kibera’s centre for legal aid and human rights, show that despite the presence of a number of NGOs here, living conditions remain arduous for many. A single toilet in Kibera serves 1,300 people.

It’s this ineffectiveness of NGOs in the East African nation that the producers of a new television show, The Samaritans, have been poking fun at lately.

“The Samaritans is a comedy series centred on the absurdities of one dysfunctional NGO. The setting for The Samaritans is the Aid for Aid Kenya field office,” Hussein Kurji, a producer of the show, tells IPS.

“The main characters are the staff who have to deal with the odd demands and decisions of the head United Kingdom Aid for Aid office and hopelessly inept local bureaucrats, while trying to write as many useless reports as possible, all under the guise of ‘saving’ Africa,” he says.

Although the show is yet to air on television and only two episodes are available online for rent, it has become popular locally and internationally.

“It is very funny, I laughed so much. But what I did not like is that the employees who say they are trying to help us poor people are just playing games,” Okoth says.

He’s not the only person who finds the show funny.

Mary Anne Karani, who works for a local NGO, is one of those fans.

“What Scott [the Aid for Aid Kenya director] says is typical NGO language, so much jargon basically saying nothing in particular. We spend the whole day in meetings in five-star hotels talking about big things like capacity building, empowering, alleviate and so on. It all sounds good on the tongue and looks good on paper, but that’s where it stops,” she tells IPS.

Kurji says that The Samaritans was inspired by such discrepancies.

“Friends and associates kept talking about the bureaucracy and ineptness at the aid offices they were working in, so I decided to pay closer attention which resulted in some serious discussions about aid and development.”

Over the course of a number of years Salim Keshavjee, producer and director of the pilot episode, and Kurji continued to pay attention to the NGO world in Kenya.

“The stories from NGOs in Kenya were absurd and it got me thinking. There really is no better way to talk about such social subjects than comedy. We set out to put these two worlds together as entertainment, as TV and Film producers that is our primary goal, to bring new and engaging characters and worlds to life,” Kurji explains.

The NGOs Coordination Board, the state’s NGOs regulatory body, shows that the NGO sector has been growing at the rate of 400 organisations per year over the last decade. The most recent statistics are from 2009, which show that 6,075 organisations were registered in this East African nation that year.

But as the sector grows, so does the controversy over the real impact it has on the lives of those they claim to work for.

Javas Bigambo, an analyst with Interthoughts Consulting, a  governance, leadership and policy consultancy, says that the situation is largely due to the fact that most NGOs here are owned by individuals who “have perfected dependency on donor aid as a cash cow for their survival.”

“The most ineffective NGOs are those working in the area of governance and access to justice, which is controlled by about 30 people with intricate networks and whose endorsement is a guarantee for funding. At the moment, it is difficult to trace the impact chain of NGOs in the governance sector, yet they net about  six million dollars annually for projects,” Bigambo says.

Bigambo says that NGOs in the governance sector “call for reforms and accountability, but they are the ones in urgent need of reform.”

“This sector is characterised by swindling of funds, tribalism, inaccuracy in reporting, and the actors are driven by private or foreign interests so as to access funding and not public interest,” he says.

According to the NGOs Coordination Board, in 2003 NGOs contributed an estimated 926 million dollars to the economy through taxes and deductions through the National Social Security Fund. However, the board says that it has had difficulties in tracing NGOs’ contribution to the economy, thanks to the low compliance in submission of returns as well as the filing of inaccurate data.

Vincent Kimosop, the director of local NGO the International Institute of Legislative Affairs, tells IPS that The Samaritans may not be too off the mark.

“There are indeed NGOs who have the wrong agenda and they cannot even show their impact.”

But Kimosop says that international donors are largely to blame for the situation.

“Donors are funding the wrong things. They need to provide funding based on the challenges that are facing people on the ground, not based on their own interests,” he says.

Bigambo is quick to point to the contribution NGOs have made in the country, particularly with providing basic services as well as the advancement of human rights.

“NGOs and their interventions are spread across sectors, from health, to agriculture, research, governance, education, environment and the impact cannot be overlooked. But many have failed,” he says.

The government has recently drafted the Public Benefit Organisations (PBOs) Act 2013, which seeks to advance a new legal, regulatory and institutional framework for PBOs in Kenya — one of its goals is to cut back foreign funding to local NGOs.

But while many agree that there is need to regulate the NGO sector, Bigambo says the act is punitive and ill advised.

“There are other ways to reform the governance sector in the NGO world. Generally, NGOs in all sectors employ hundreds of thousands of Kenyans, and help to boost farming technology, food security and disease control. The PBO Act will be very counterproductive,” he says.

But Kurji says that The Samaritans is not just a laughing matter.

“We hope that people can see that Kenya is more than the ‘slums and guns’ story we always hear in the media, especially internationally. That there are also good ideas and good quality productions and acting available from Kenya,” Kurji says, adding that there are plans to broadcast the show on both local and international television stations.