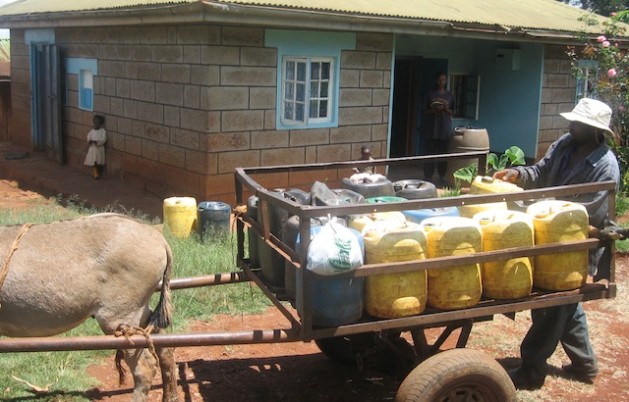 The long rains stopped earlier than expected in Kenya this year and in some areas taps have run dry and rain-fed agriculture has been affected. Credit: Miriam Gathigah/IPS

NAIROBI, Dec 31 2013 (IPS) - Kenya is facing its greatest challenge as weather patterns are starting to significantly affect food production. And experts are blaming the low adaptive capacity of the farming sector on an excess of policy and institutional frameworks that are silent on both climate change and agriculture.

Joshua Kosgei, an agricultural extension officer in Elburgon, Rift Valley province, told IPS that at least 300,000 maize farmers in the province are affected by climate change as the region has become too warm for maize farming. Production of this East African nation’s staple crop is expected to fall by at least 25 percent.

The country’s food security outlook covering June to December shows that a gradual increase in maize prices is expected. “Currently, wholesale maize prices are about 10 percent above the five year average and by December, maize prices are likely to be higher,” the outlook report said.

The Association for Strengthening Agricultural Research in Eastern and Central Africa, a regional research body, predicts that as temperatures become too high for maize production, the country’s granary will shift from the Rift Valley province to parts of lower Eastern province.

“Maize has done well in Rift Valley, but the region is receiving less and less rainfall, so maize farming must move to other regions that were hotter but are now receiving adequate rainfall,” Kosgei told IPS.

According to the Ministry of Agriculture, five million out of a total eight million households in the country depend directly on agriculture. In addition, small-scale farmers here account for at least 75 percent of the total agricultural output and 70 percent of marketed agricultural produce.

Judith Gicharu, a scientist and environment expert, told IPS that “there are various options to cushion the agricultural sector and consumers from crippling effects of severe climate change, including adapting to new technologies and expanding crop varieties. But these options are not backed by policy.”

She explained that discussion on climate change as a policy issue is still new in this East African nation as the government’s first tangible commitment to climate change was in the form of a 2010 document titled the National Climate Change Response Strategy (NCCRS).

In March this year the government launched the National Climate Change Plan to operationalise the existing NCCRS, but Gicharu pointed out that it was not a policy document.

“There is no specific policy on climate change and agriculture,” she said.

According to the Ministry of Environment, Water and Natural Resources, there are at least 90 national policies and laws relevant to climate change, including the Natural Resource Information Management policy, Energy policy, and the Water Act. But Gicharu said that most of these policies had no provisions on how to address climate change.

“Reading these laws, you do not get a sense of what needs to be done to mitigate or adapt to climate change,” she said. “All of them have significant implications on the environment and climate change, but they are yet to be harmonised. All of them have competing goals and interests. So policy challenges exist within policies and also across policies.”

She said the government’s ambitious plan to place half a million hectares under modern irrigation, which is part of the Galana-Kulalu irrigation scheme in Kilifi County in southern Kenya, as a climate change adaptation method to boost production would be difficult to implement because of conflicting policies. The government also plans to place an additional 1.25 million hectares in arid and semi-arid areas of the country under irrigation.

“The National Land policy and the Water Act lack clear coordination guidelines which will certainly interfere with these kind of priority climate adaptation plans.”

Gathuru Mburu, coordinator of the African Biodiversity Network, told IPS that if the government failed to meet its financial obligation to combat climate change, other stakeholders would fill the vacuum, sometimes to the detriment of the people.

“Multinationals are behind various policies which they claim are to combat climate change, but these policies have nothing to do with climate change and are targeting to edge out vulnerable farmers. They [multinationals] intend to criminalise the informal sector, in other words, the small-scale farmers,” he said.

He was referring to a proposed seed and anti-counterfeiting law that, if passed, will require farmers to only used certified seeds.